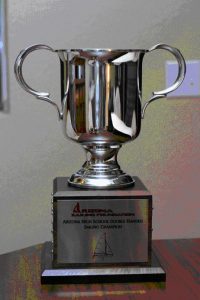 The third double handed (two person) sailing championship was held in the east basin of Tempe Town Lake on Saturday April 16th 2011.  Parents and friends cheered on their favorite sailors from the blue shade umbrellas on the north shore (just below the east basin condo development).

Alexia Lorch won with crew Scott Soethe.  Alexia is a junior at Xavier College Preparatory and Scott attends Brophy College Preparatory.  A perpetual trophy to display at the school of the skipper for half the time until next years race (the other half of the time to be displayed at the school of the crew) was presented after the races.  Individual trophies were presented for the winners to keep.

Four boats sailed with eight students on board.  The last two years had six boats racing in the championship.  We hope to have more than six in 2012.  Two races were held in the morning with very light wind.  A one hour lunch break was taken before three twice around races in freshening afternoon breeze (6-8 MPH).  Three different boats scored first place finishes.  There was a chance for a lead change in the last race, but Alexia and Scott managed to hold off the competition in variable strength wind that was changing direction frequently.

FYI for next year….the race is NOT LIMITED TO ASF HS SAILING CLASS STUDENTS, however we’re pleased to note that this year’s winner was a student in 2010.

Information about High School Sailing Classes is available at https://www.arizonayachtclub.org/Education/hsclass.shtml

There are decorative blue shade umbrellas on the north shore (just below the east basin condo development) where many parents and siblings cheered.

As of now, unless some special Tempe event forces a date change, the 2012 championship will be held on Saturday April 22nd 2012. 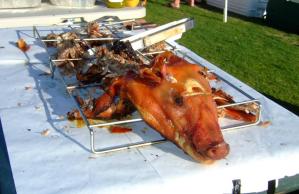 AFTER THE RACING…..it was time to PIG OUT!   The Arizona Sailing Foundation and Arizona Yacht Club joined together for a very nice Spring Picnic.  High School Sailing Championship participants, Start Sailing Right spring class students and a menagerie of AYC members, families and friends enjoyed an afternoon of sun and sailing on the “Grassy Knoll”. 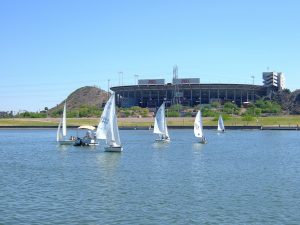 Many thanks to ASF Board President John Mayall and his picnic team: Rick Lake, “Pig Master”, Dave Christensen, “Grill Master”, and Lisa Lake, Wendy Larsen and a host of other helping hands!  Congratulations to ASF for ending the spring season in excellent fashion!