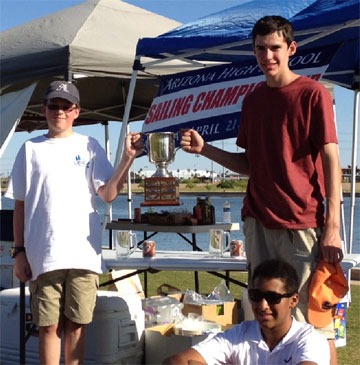 After three light-air races in the morning, last year’s winning team of Alexia Lorch and Scott Soethe were just two points behind Luke and Jack. After a lunch break, the wind picked up and everyone headed out for one more deciding race. Luke and Jack won, sealing the championship.

Luke is a Washington High School student in Arizona’s Glendale district. And Jack is a student at Ward Traditional Academy in Tempe. They were awarded a perpetual trophy that they can display at their schools and were given individual trophies to keep.

The high school championship is run by the Arizona Sailing Foundation (ASF) and was organized by George Tingom. The Principal Race Officer was Arizona State University student Gerald Byrnes.

While the championship isn’t limited to students who participate in ASF’s Tuesday after-school sailing class, both Luke and Jack are in the program. Three years ago, Jack also won the most improved junior sailor award as part of the ASF Opti Program.

Information on the ASF high school class is available here.

George is already planning the next championship and says that unless a special Tempe event forces a date change, the event will happen Saturday, April 15, 2013.