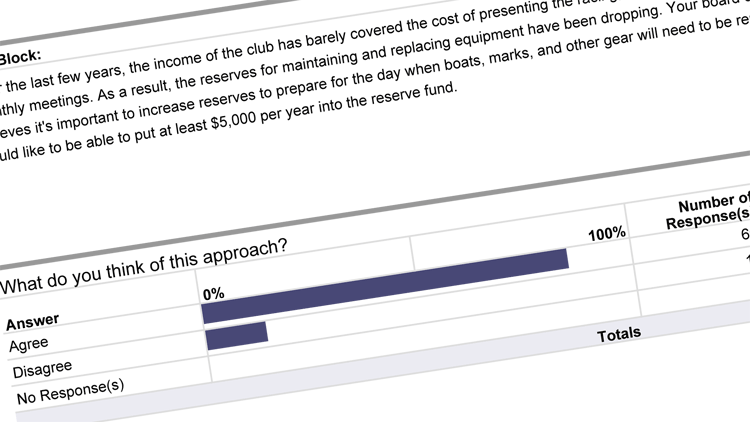 February 24, 2014 In Board of Directors, Member Interest By Mike Ferring

Here are the results of a member survey conducted the week of February 17 about AYC finances. Seventy-seven members completed the survey, presented online using Constant Contact’s survey system. All responses were confidential.

Members value membership. Is AYC worth the money you pay? The result is a resounding “yes.” Using a five-point scale, with one being “lousy” and five “outstanding,” respondents rate AYC 4.0 for the value they think they get for the money they spend. Breaking it down, 35% rate AYC’s value at the top score of  5; 42% rate it a 4; and just over 20% rate it a 3 or lower.

Who are the 20% who don’t rate it as highly? Speaking generally, they’re people who don’t race (50% race vs. 72% of those who rate it higher), but there’s no pattern for how long they’ve been members of the club. Not surprisingly these people don’t think dues should be raised, but think racing fees should go up. And they’re more likely to say it’s more important for the club to cut costs than to raise revenue. 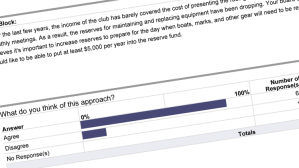 It’s reassuring to learn that members rate the club’s value highly, but the main purpose of the survey was to learn how members think the club should deal with dues, fees, and expenses.

The survey found members overwhelmingly agree that it’s a good idea to try to increase financial reserves to be ready for the day when equipment needs to be replaced.

86% of the respondents think it’s important to build reserves. The few who disagree (14%) tend to be the people who think the club is poorly run or isn’t concerned enough about keeping costs down—or who simply don’t want to pay more money.

65% think it’s more important to raise revenue than it is to cut costs. 31% think the opposite.

Clearly the members of the board of directors think they’re being responsible stewards of the club checkbook, saving money wherever possible and spending no more than necessary to present the quality of equipment and programs members expect. A minority of respondents isn’t so sure. They haven’t studied club spending of course, but they’re sure there’s money to be saved. “Every line item needs to be reviewed for cost savings,” wrote one. “Anywhere possible,” said another. (In fact, Commodore Cindy Pillote has appointed a committee to review the spending line by line to look for ways to economize.)

Over the last two years, the fleet captains have increased entry fees about 15%, with nonmembers paying even higher increases. Respondents believe racing fees should increase further by a high margin (62%-31%). 32% say raise them 10%; 20% say 20%; and 18% say raise them by 5% or less. Objections to raising fees? Mostly concern that higher fees would drive away entries.

The board will decide at its next meeting whether to submit a proposal for a dues increase to the general membership. The increase would need to be approved in a vote, probably at the same time as the next election of officers.

Interested in learning more about how the club works? Here’s an explanation and link to the bylaws. And here’s the current budget.