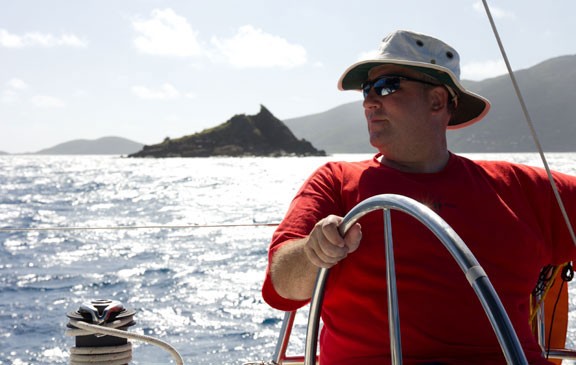 March 31, 2014 In Board of Directors, Member Interest By Mike Ferring

AYC Election for the Next Board of Directors

The annual election of AYC officers has begun. Here are the nominees: 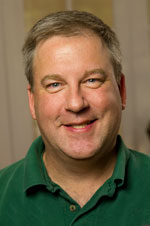 Peter Lehrach has been nominated to be the next AYC Commodore.

In addition to voting for officers, you’ll be asked to decide whether to increase the annual dues from $125/year to $150/year. The increase requires a two-thirds majority in order to pass. (AYC dues have not increased for more than 10 years.)

A link to voting has been emailed to all the full members of record as of April 1. If you didn’t receive the link, contact Mike Ferring. If you requested a paper ballot, you’ll need to return it postmarked by May 9 or bring it to the counting session at the Caddy Shack by 6pm on Tuesday, May 13. With electronic voting, the counting takes about one minute, so don’t be late. 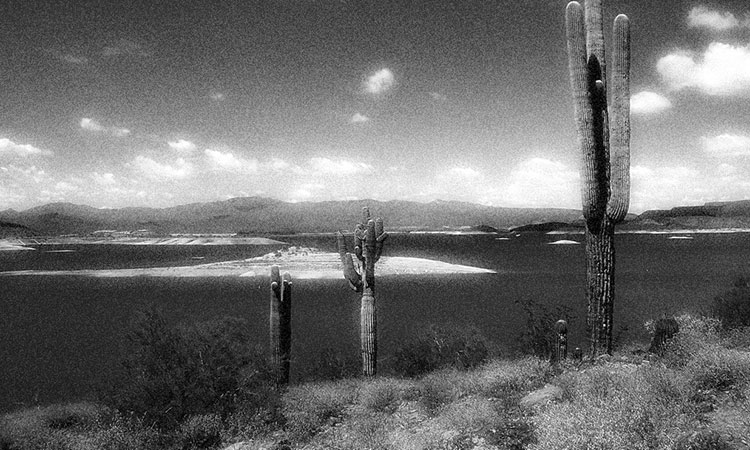 The Tall Cactus Regatta returns to Lake Pleasant on April 12. Sign up by clicking on the button above. Note: This is a new registration system, so let us know what you think of it. You’ll pay through the PayPal system, but you’ll have the option of paying as a PayPal guest using any credit card. 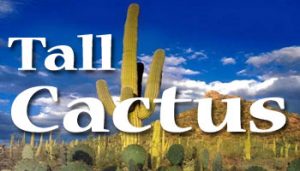 For this annual event, we’re looking forward to a casual sunny cruise around the islands and coves of Lake Pleasant, finishing up at Pleasant Harbor.

After the finish, we’ll gather at Spinnaker point to celebrate our success at navigating Lake Pleasant’s treacherous waters with a tot of grog and other refreshments at a barbeque.

We would like to extend a hearty invitation to our friends in the Lake Pleasant Sailing Club and other sailing groups to join us in this annual floating fiesta.

Here is the chart for the windier day, which it appears we’ll have: About 12 miles 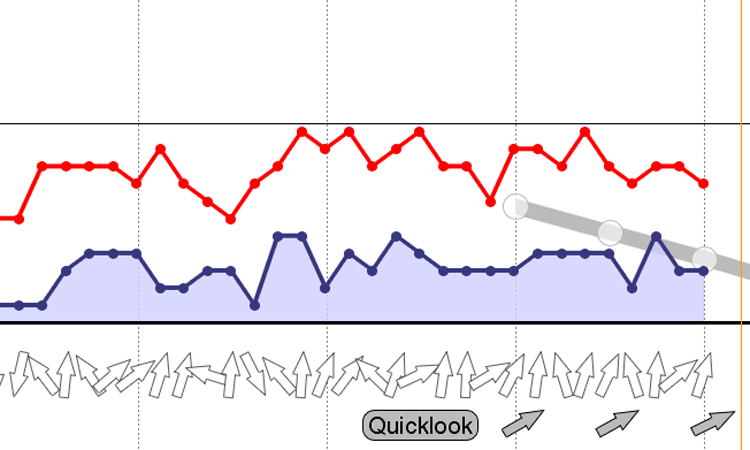 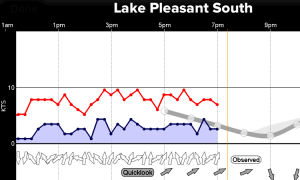 Lake Confusing lived up to its name on the weekend (3/23-24), with lots of shifts and mostly light to no wind. In spite of that we got in several races. And it was warm. And Martin Lorch’s dinner was fabulous. Here are the results, subject to some corrections to come.

The TransLoch fleet suffered most, with only three boats able to complete the distance by the 4 o’clock cutoff. Here are the (revised) scores.

Light wind and light turnout for this weekend (3/16) of Tempe Town Lake racing. Here are the results.

Bruce Brown: How to Stay Safe on a Boat 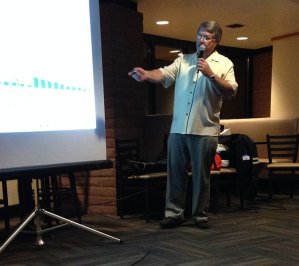 The most important thing you can do to stay safe on a boat is: stay on the boat. Once you’re in the water, recovery is difficult, especially with today’s fast boats that leave a crew overboard far behind in short order.

Safety expert Bruce Brown offered a string of tips to the March monthly meeting, including the use of jacklines and safety harnesses, PFDs, and recovery techniques.

Bruce presented six challenges to rescues and offered 8 strategies to make them successful. In the ocean, crew recovery is considerably more complicated than in our generally calm lakes. Spotting a crew member (or even being aware someone’s gone overboard) is one of the biggest challenges. Quickly marking approximate location by GPS and keeping a spotter with eyes on the person are critical—and the person in the water can help by waving and pulling on a brightly-colored hood.

It’s also important to practice, practice, practice. Learn to bring the boat to a quick stop and then return quickly. When the water’s cold, the crew overboard can lose dexterity quickly, then have trouble thinking clearly, and then face hypothermia.

Here are two other documents Bruce left with us: 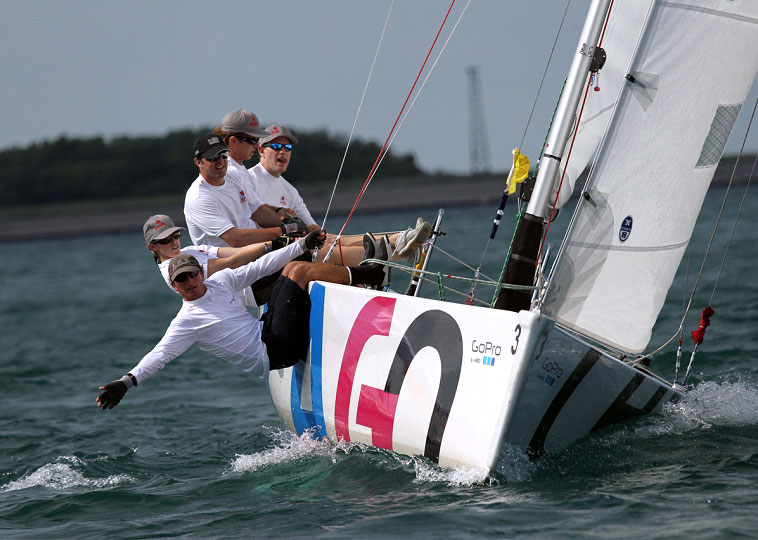 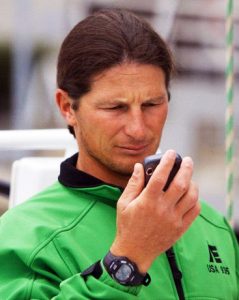 Ullman Sails professional sailor Erik Shampain is our April monthly meeting speaker. Erik has an extensive sailing resume that begins with growing up on a boat and headlines such things as a course record and race sweep in the Pacific Cup, an Etchells World Championship title and Melges 24 National Championship.

The meeting is Tuesday, April 8, beginning at 7pm (but arrive early for dinner). Monthly meetings are held at the Caddy Shack @ Rolling Hills Golf Course, 1415 North Mill Avenue, Tempe, AZ 85281-1205 (map) and both members and non-members are welcome to attend.

“One of the most challenging things I’ve done is the Transpac, double-handed—twice,” says Erik. He did it once on a 33-foot boat and once on a 35-foot boat.

“Alone with your thoughts for hours at a time; it’ll get to you. Over a 12-day race you’ve basically second-guessed every decision you’ve ever made. I was asked what would happen if I didn’t get along with my co-skipper. My answer was always, doesn’t matter, we’re on the opposite shift. I never see him!”

Erik Shampain’s father worked on racing boats when Erik was growing up and Erik has clearly taken to the sport. This year he’s racing with a Farr 40, a Melges 20, various J/70s and his own Hobie 33. 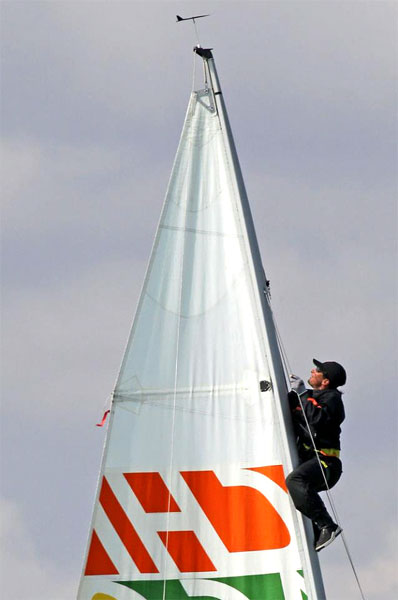 Spiffing Up the ASF Fleet 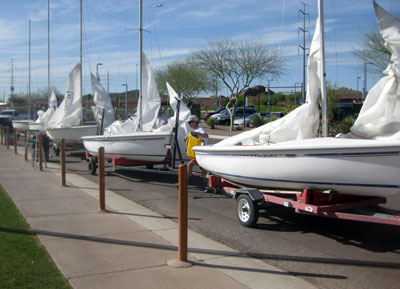 On Saturday (3/15/14) many helpers got the last of the refitting the better hull 14.2s into sailing class condition. We now have ten 14.2s with good sails. ASF is committed to training sailors how to sail with decent equipment and to allow the ASF/AYC adopt-a-boat program to continue.

With 10 boats, our Adult Beginning Sailing class will have room for 20 students. We don’t have the dates set now, but the first of the four Adult Beginning Sailing Classes will start near the end of September and every other Saturday for four class days. We plan to hold the cost of the class at $350 per student. I’m taking names of those would like to sign up, with any overflow going on a waiting list. 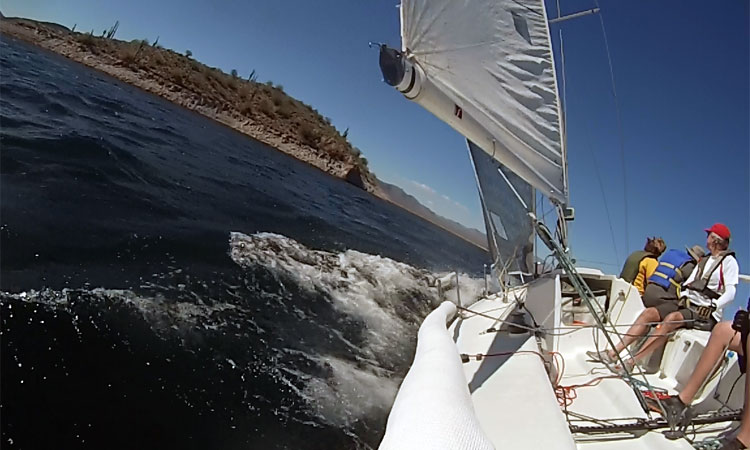 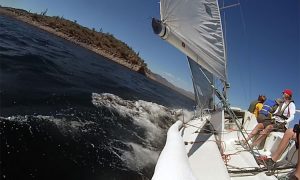 High winds, no winds—Lake Pleasant served up a full helping this weekend.

Saturday the wind topped out at 30 mph and kept everybody on the edges of their boats. Speed records tumbled. Fortunately, no boats.

The scores can be found on the results page or by clicking here. And this second weekend for the TransLoch fleet can be found here.

The scores from the this last weekend of racing at Temp Town Lake are posted on the results page or you’ll find them by clicking here. 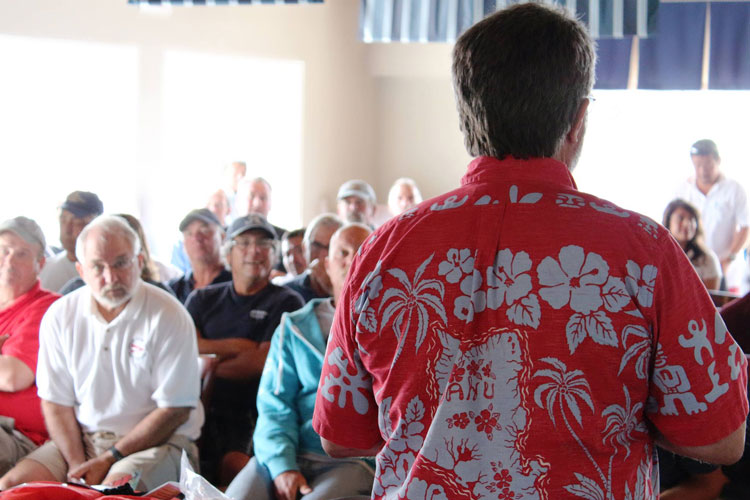 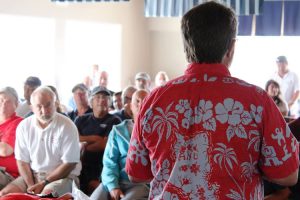 We’re pretty sure this is Bruce Brown’s back, a picture taken as he was teaching a Safety-at-Sea seminar in California (he hasn’t sent us any pictures so we snatched this from Facebook). You’ll see another side of Bruce at the meeting.

If you attend a safety-at-sea seminar on the West Coast, you’re likely to meet this guy: Bruce Brown. At this month’s meeting, he’ll tell us the best methods for crew overboard recovery and suggest the best choices for personal safety equipment. And we’ll have a report on it shortly.

Bruce is a multi-time Past President of the United States Marine Association; he’s an instructor for the Coast Guard 100 Ton License Program; and he has extensive offshore racing experience, including skippering on the TransPac; and he specializes in evaluating safety products, such as life rafts, marine communication, and heavy weather forecasts.

The meeting is Tuesday, March 11, beginning at 7pm (but arrive early for dinner). Monthly meetings are held at the Caddy Shack @ Rolling Hills Golf Course, 1415 North Mill Avenue, Tempe, AZ 85281-1205 (map) and both members and non-members are welcome to attend.

Also on the program, a couple short videos from John deCastro, who was a Course Marshall for the America’s Cup last fall. He’ll briefly share some of his experiences. 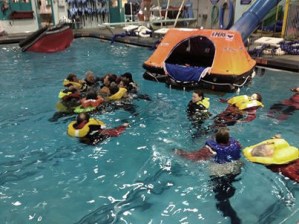 Checking out safety equipment in a pool. 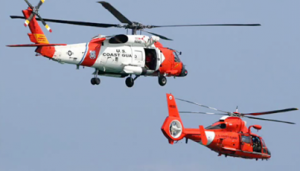 Best not to have any of these hovering over your boat in distress. 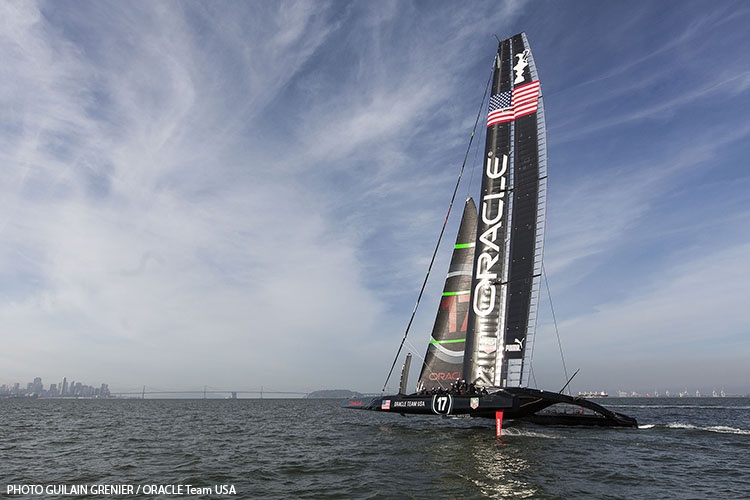 The Wall Street Journal has put together a nice recap of the America’s Cup comeback of Team Oracle, complete with various video bits and an interview with Jimmy Spithill.