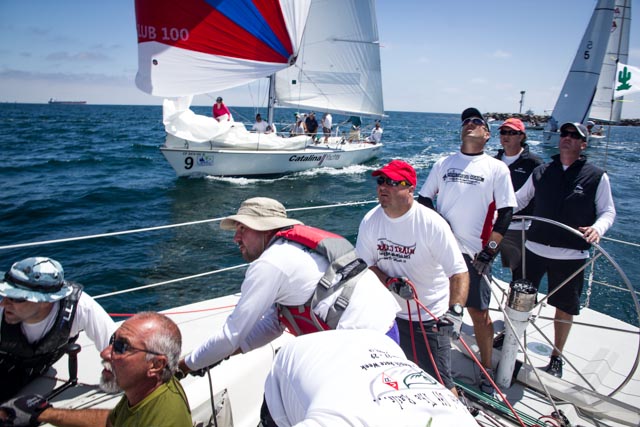 AYC Turns Out in Force for Long Beach Race Week 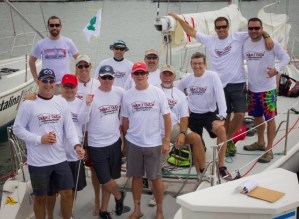 The dozen members of the Crazy Train pick-up team organized by John Riddell.

First there are the sailors of the Viper fleet. All of them headed for Long Beach June 27-29 for the Ullman Sails Long Beach Race Week. And then there were the misfits of the Crazy Train, a dozen guys thrown together to sail a Catalina 37. And Chris Smith and his team on his J/80 sailing the longer “random leg” course. A couple dozen or so AYC people altogether.

How did it go? Far as I could tell, everybody was having a good time with slightly lighter than usual wind, lots of sun, and temperatures in the 70s. Yes, 70s. Why would this not be good? And the LBRW was a very well organized event with 142 entries sailing over three days.

Court Roberts edged Tony Chapman for local honors in the 23-boat Viper fleet, finishing 10 and 11. Chris Smith grabbed fifth in his segment of the random leg. And the misfits? More on this later, but they were feeling pretty good with a 9th out of a 11 given the size of the challenge. 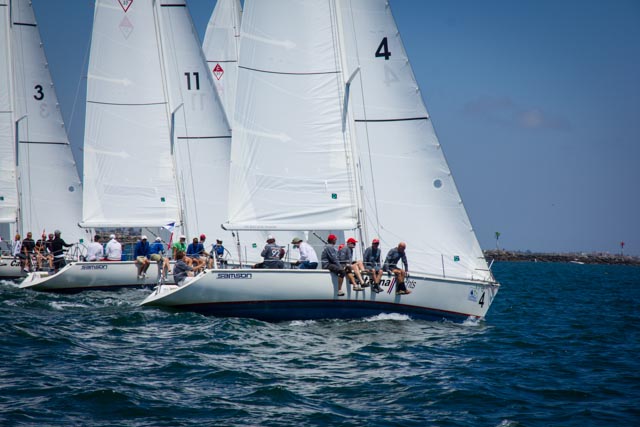 The Catalina 37 starts were challenging on a short line and 11 big boats. Photos: Mike Ferring

Two Buccs, a Laser, and a C14 all headed for the finish on a Sunday morning. Photo: Katherine Roxlo

The morning summer series is the brainchild of Greg Woodcock, who thought sailing in the morning made more sense than doing it in the heat of the afternoon and managed to get Tempe approval. At the same time, he simplified it all so that everyone sails together (no separate fleets) and nobody keeps score. Members pay just $20 for six race days and the Adopt-a-Boat program is active.

So it’s no longer the Heat Stroke Series, but it’s become Cool Summer Sunday, a twist of a different kind. The change of time has increased participation from next to none to a few, 9 boats signed up for the series and this day five boats were on the water (including Greg, sailing with his grandson). Katherine Roxlo has generously agreed to be race committee for four of the six races days. 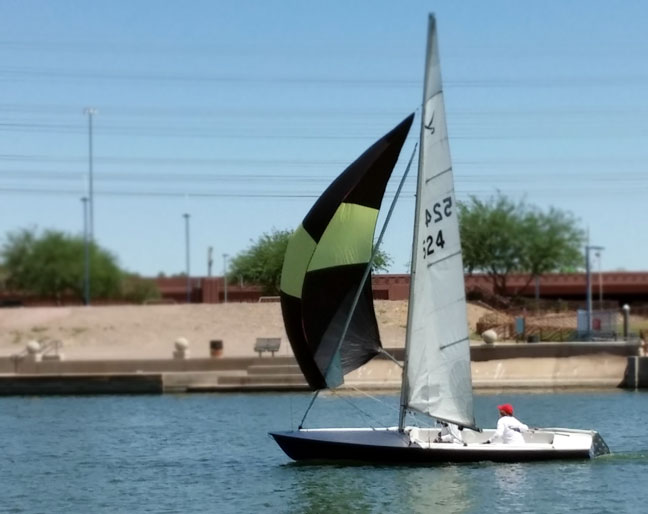 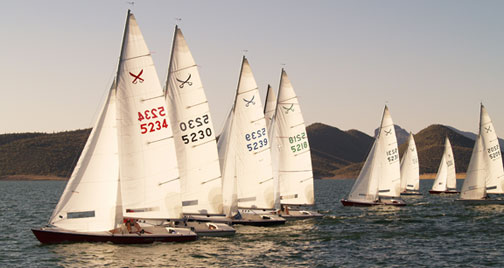 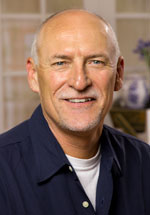 AYC’s Emory Heisler has been chosen for a national honor for his work with the national Buccaneer 18 class. Each year the Buccaneer 18 class selects one member to be the official “Quaiche* Bearer,” recognizing outstanding effort and service to the class−and Emory is the 2014 honoree.

Bucc Commodore Jimmy Yurko says, “I’m proud to know Emory. Emory is a remarkable man with unparalleled optimism and enthusiasm. His dedication to the class and the sport of sailing are truly admirable, and the Buccaneer class is fortunate to have such a devoted sailor, leader and friend.”

Our club’s sailors nominated Emory for the award with this letter:

Fleet 79 from Arizona proudly nominates Emory Heisler for the MacAlpine Downie Gibbs Quaich in recognition of his dedication and contributions to the Buccaneer 18 Class Association.

Emory was one of the early Buccaneer 18 sailors in Arizona and helped grow Fleet 79, as well as other fleets across the country. For over a decade, Emory’s spirit and fervor for the Class, as well as his willingness to serve and help others, has been an immeasurable asset to the Class.

At the national level, Emory has been an enthusiastic ambassador of Fleet 79 for many years.  In addition to representing his local Fleet, Emory has made several contributions to the Buccaneer 18 National Class Association, including heading up the Buccaneer 18 Mid Winters in Arizona, serving as Race Chair for the 2009 Buccaneer 18 North American Championship, and serving as webmaster for the Class.

Emory has also contributed to the Class in many, less tangible ways.  With his outgoing charm and personality, he encourages sailors to join the Class and compete in Class events.   He works hard behind the scenes to selflessly find crew, boats, and/or rides for others, so they can attend and enjoy national events.  And, he does it all with a smile, making the events fun for everyone!

And the pirate version of Emory Heisler!

Emory also lends his services to his local yacht club, serving on the Arizona Yacht Club board for several years, including the in the roles of Commodore and Birthday Regatta Chair.  Emory also served as the Buccaneer 18 Fleet representative to the AYC for several years, before passing the torch to someone else.  Emory has used his positions in leadership roles as an opportunity for mentoring others, setting others up to take on additional responsibilities within the club.

Emory is the reason that many of us in Arizona, as well as others outside the state, are Buccaneers.  His zeal and generosity in helping and teaching others has helped grow the Buccaneer Class and Fleet 79.

*What’s a quaich? Noun (obsolete): A traditional, shallow, two-handled Scottish cup symbolising friendship. It was originally used to toast the arrival or departure of a visitor. 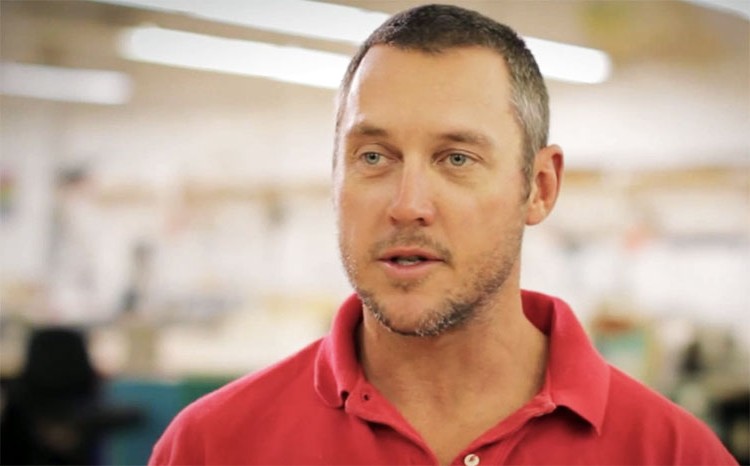 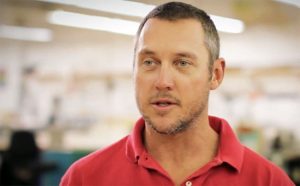 How do you organize a crew that’s never sailed together? How do you organize them for a regatta? For anyone who’s shuffled crew before (wouldn’t that be everyone?), it’s a vital question. At July’s monthly meeting we’ll see what Keith Magnussen suggests.

Keith has been an integral part of the Ullman Sails Viper 640 program, doing much of the R&D and assisting with the advancement of sail design in this high performance class.

The meeting is Tuesday, July 8, beginning at 7pm (but arrive early for dinner). Monthly meetings are held at the Caddy Shack @ Rolling Hills Golf Course, 1415 North Mill Avenue, Tempe, AZ 85281-1205 (map) and both members and non-members are welcome to attend. 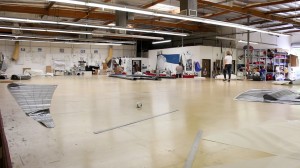 Some of Keith’s resume highlights include Ultimate 20 North American Champ in 2013 as tactician, second overall in the recent Newport to Ensenada race as navigator and helm, second in class in the 2011 Transpac as watch captain, and first overall in the 2012 Long Beach Race Week as tactician aboard a Viper 640. He’s now optimizing two boats for the 2015 Transpac, a Jeanneau 45 and a J/125.

Keith grew up racing in Southern California and started working for Ullman Sails four years ago. Now he deals with a wide range of boats, from the Viper to 70-foot cruising boats−and he says that’s what keeps the job exciting. Below is a YouTube clip of Keith describing the Ullman way of sailmaking, shot by the website Sea Ya, which has this additional information on their visit to the loft.

In addition to Keith’s presentation, we’ll hear from Marshall Williamson of the Tucson Sailing Club. He’ll fill us in on the club’s San Carlos Regatta, a twice-annual event that happens within a day’s drive of here. Marshall began racing in the Philadelphia area, crewed for races in Annapolis, and has been crewing at Lake Pleasant with Gene Muller on his J/24. He’ll fill us in on the kind of sailing and racing you can expect at San Carlos. 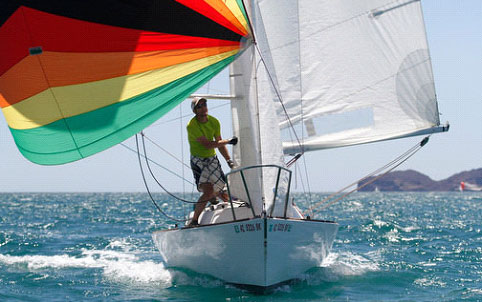 Some of the action you’ll find at the Tucson Sailing Club’s San Carlos regattas. 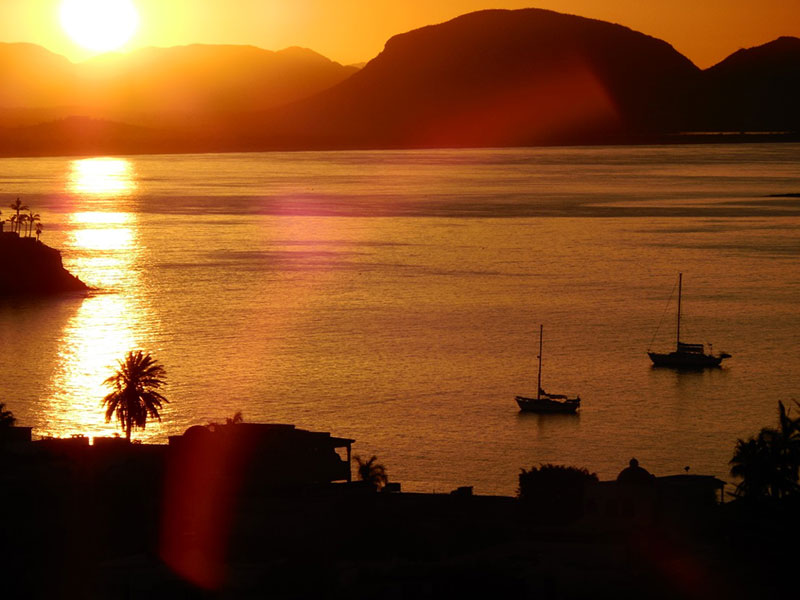 And some of the scenery that comes with it. 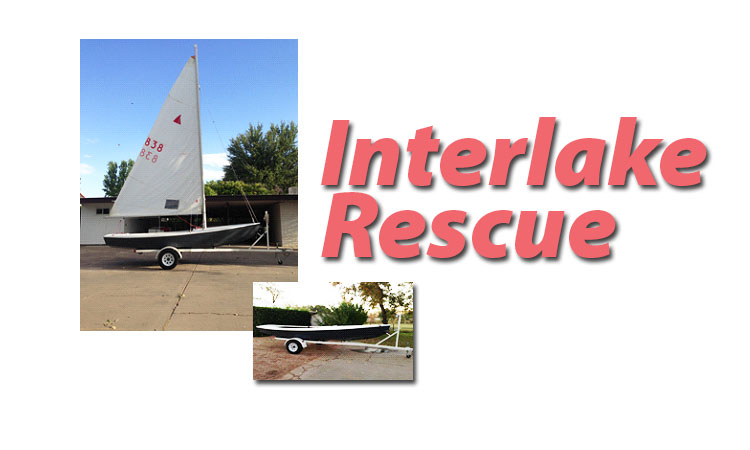 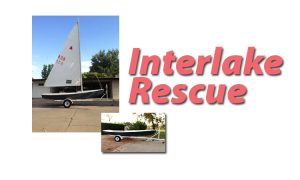 Like a lot of boat projects, the one Otto Shill envisioned turned out to be a little bit more complicated than expected. Instead of a light fiberglass fluff and buff, Otto’s project began to look more like boat building than boat fixing.

It started with a derelict donation he bought from the Arizona Sailing Foundation (ASF)−and I hope they didn’t charge him much. The project reached completion when sailed with his father on Tempe Town Lake.

The journey was much longer, one that began long ago with a sail on Lake Pleasant. 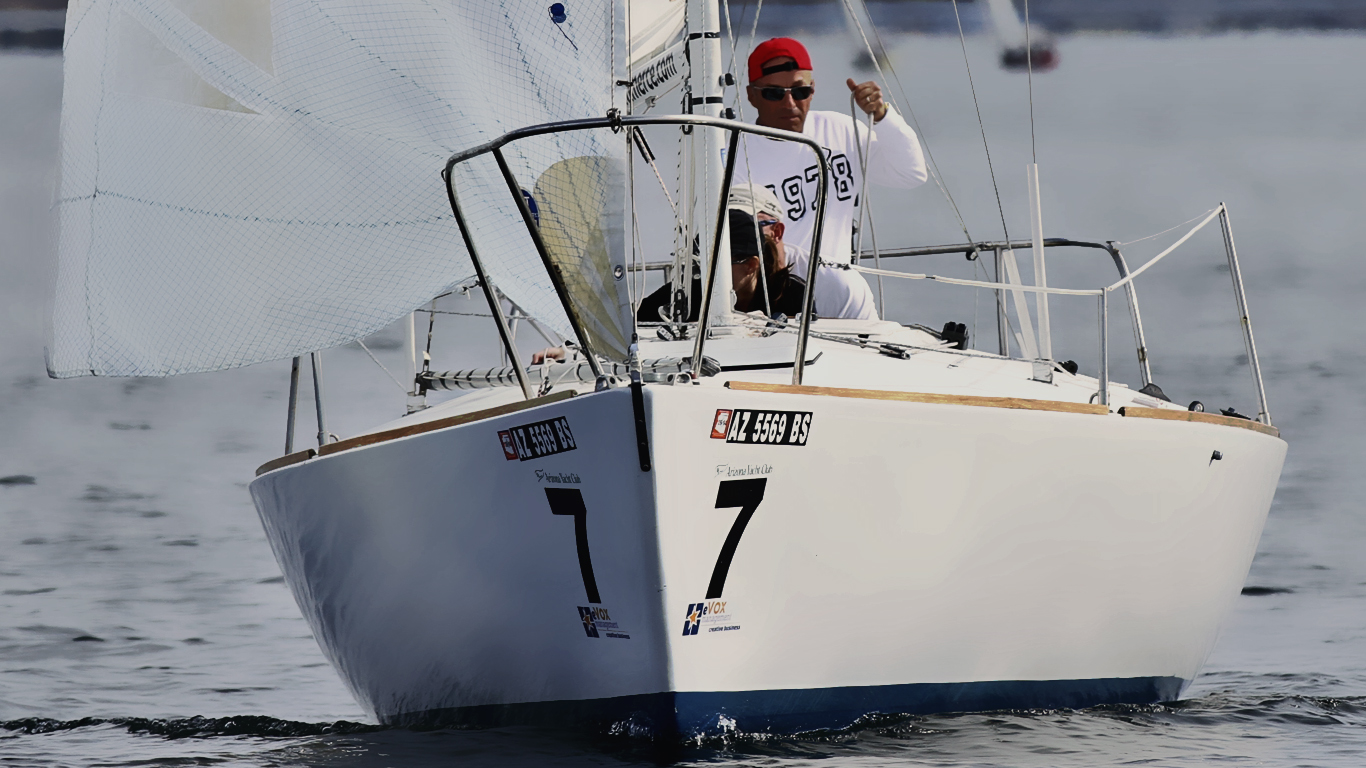 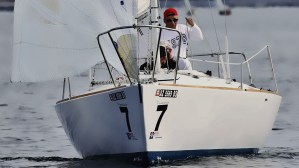 When Victor Felice decided to spruce up his J/24 Mermaid Rescue, he didn’t go halfway. He wanted to make it cleaner and faster and was prepared to put in the sweat equity to make it happen. Tuesday night, he’ll show you how he did it, from the haul-out to the fun time when the crew splashed the Mermaid again.

The meeting is Tuesday, June 10, beginning at 7pm (but arrive early for dinner). Monthly meetings are held at the Caddy Shack @ Rolling Hills Golf Course, 1415 North Mill Avenue, Tempe, AZ 85281-1205 (map) and both members and non-members are welcome to attend.

Victor loves to sail and he loves to shoot video of his sailing, so he’ll be bringing some of the action to the meeting, including this video of the first time back in the water on May 31.

Rear Commodore Chris Smith will also be there to tell us about his race to Catalina on his J/80.