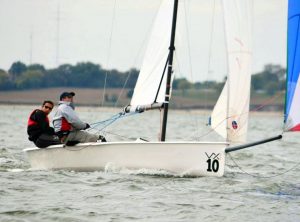 Rod Favela at the helm of the speedy VX One.

The August AYC meeting will feature sailing coach and sailing equipment supplier Rod Favela. In addition to his own coaching, Rod is on the faculty of the NorthU-Offshore Sailing School Performance Race Week in Captiva, Florida.

Rod was active in the creation of the Viper 640 fleet and now works with the VX One sportboat−and the rise of sportboats will be the focus of his monthly meeting talk. What are they? What accounts for their growing popularity? What are the physical demands of sailing them? In what ways are they different to sail from other boats?

The meeting is Tuesday, August 12, beginning at 7pm (but arrive early for dinner). Monthly meetings are held at the Caddy Shack @ Rolling Hills Golf Course, 1415 North Mill Avenue, Tempe, AZ 85281-1205 (map) and both members and non-members are welcome to attend.

Rod Favela started sailing in 1988 at age 11 in his hometown of Puerto La Cruz, Venezuela. His intro to sailing was in the honorable Sunfish, as at that time the country did not have an Opti fleet. Rod quickly moved on to becoming part of the national sailing team and alternated sailing J/24s , Solings and Star.

After his move to the US in 2005, he actively sailed on Hobie 33, J/24, J/105, J/109, Melges 32, Henderson 30, J/122 and then says he was “obsessed” with the Viper 640 and went full-on with the VX One. Alternating with some catamaran sailing and windsurfing, most of his sailing hours have been spent on dinghies, once again going back to his roots of sailing closer to the water.

Nowadays, Rod sails in Texas, at Rush Creek Yacht Club where he’s helping grow the VX One in the Southwest. His sailing supply business is Vela Sailing Supply. 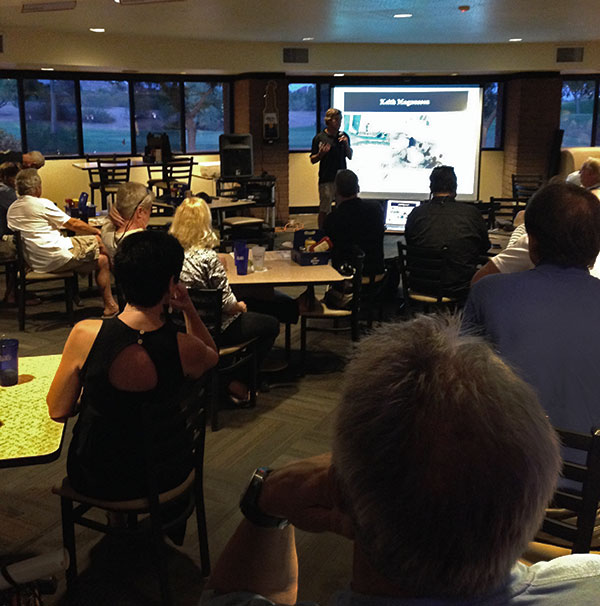 Tip for a Happy Crew: Make Sure It’s Fun 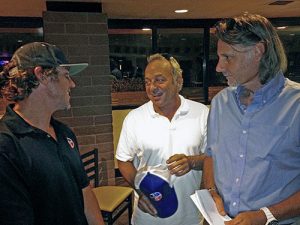 Keith Magnussen of Ullman Sails offers one key tip for a contented crew: Make sure they have fun. Bottom line.

Keith spoke at the July monthly meeting (7/9) with several tips for captains. Keep the suggestions positive. Make sure people understand their roles. Make sure they get a beer. And if they’re giving up their weekend for a ride on your boat, make sure they leave with a smile.

Besides the tips for organizing a crew, Keith laid out some suggestions to help go fast, beginning with making sure the boat’s as light as it can be. He recommends marking lines and spreaders for repeatable trim. And at the start: don’t barge. All basics, but important.

Tucson Sailing Club’s Marshall Williamson also spoke at the meeting, showing some enticing shots of TSC’s twice-yearly regattas in San Carlos, Mexico. Marshall dangled an attractive mix: nice wind and fun parties. TSC’s next regatta is Halloween weekend and the next on Memorial Day weekend 2015. Here’s a link to their site. 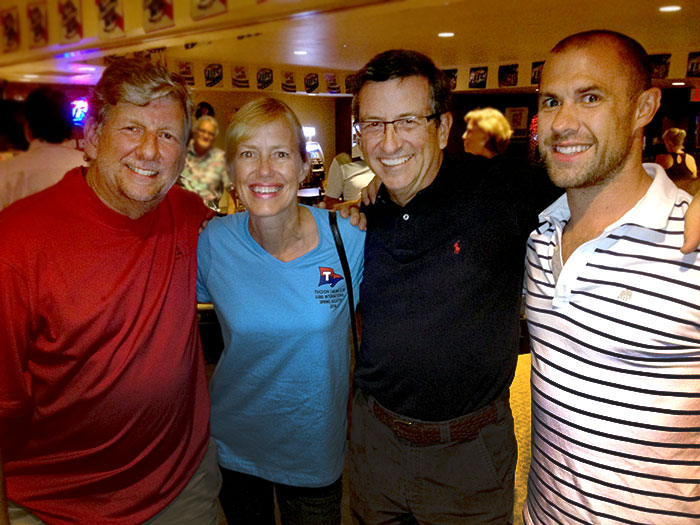 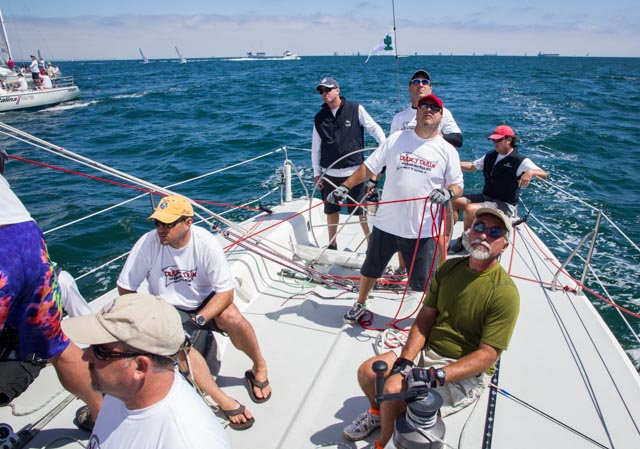 Jumping on the Riddell Crazy Train 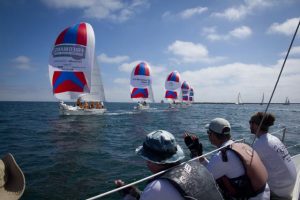 The view of oncoming spin-flying boats was so pretty the crew applauded. Photos: Mike Ferring

Here’s a prescription for sailing chaos: Take a dozen men who barely know each other, throw them in a frat-house hot-house, mix in gallons of beer and vodka, drop them on a 37-foot boat that most of them have never sailed, on a race course that’s a complete mystery to them, outlaw speed and nav instruments, give them 45 minutes to practice, and put them up against 10 well-drilled, well-honed competitors.

Oh, and just to make things interesting, make most of the dozen captains of their own boats with their own ideas of speed and tactics. And as an icebreaker, one of them greets another one by announcing, “I don’t like you and I don’t know how I can sail with you.”

So, how did it come out? 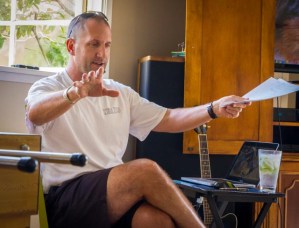 None of this is made up and some of it you’d never believe anyway, but for the third year AYC membership director John Riddell patched together a crew of guys from the club with the express goal of their getting to know each other, of mingling experience with inexperience—heading off to have fun while trying not to make fools of themselves in front of the best of the West Coast sailing glitterati. First year’s results: last. Second year: next to last. Third year: third from last. At this rate, it’s victory in 2022!

The venue is the Ullman Sails Long Beach Race Week, a very well organized and run regatta that this year drew 142 boats, including a couple TP52s and boats that are even bigger. Tony Chapman told me before the regatta that he thinks it’s the best on the coast and he’s been going for years. In fact, all the AYC Vipers were there to compete. And Chris Smith towed his J/80 for this event and another race that sails to Catalina. In all, there were probably over 30 AYC people racing on Friday, Saturday, and Sunday.

We all gathered Thursday in a very nice rented house not far from Long Beach Yacht Club and a short walk to the clatter of 2nd Avenue’s row of restaurants and shops. I never got an exact count, but there were at least 15 men sharing this four bedroom, 2½ bath house. What they did at night is the stuff of next-day legend, but what happens in Long Beach, you know, stays there. Animal House didn’t have much on this bunch of much-older-than-thats. 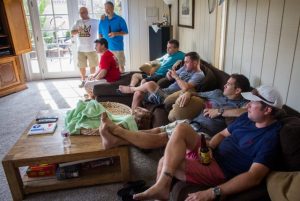 Some of the raucous pick-up crew of Crazy Train.

So we gathered in a meeting where John Riddell cracked jokes and made it clear that he was pretty sure he knew what he was doing on big boats and he expected us to follow instructions and no backtalk. He said in the past he had a habit of shouting instructions (and other words) from the back of the boat to the front of the boat and this year he damn well wasn’t going to do that (a vow he broke constantly all three days). Everybody talked; some listened. It was very loud.

I woke up at 6-something Friday morning to the smell of frying bacon and sausage. Peter Lehrach would stand in front of the frying pans for a couple hours each morning stacking eggs and bacon for the gathering mob. Thanks, Peter. And then Adam “The Badger” Torel would mass-assemble a countertop of sandwiches to bag for lunch. Adam was John’s able organizer off the water. 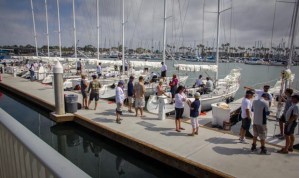 The 11 racing boats lined up stern-to in slips in front of Long Beach Yacht Club, each boat rented from the club for the regatta. They’re 1990 Catalina 37s, built for the Congressional Cup match racing regatta that was already famous when Frank Butler custom built these 11-of-a-kind boats that have been used for that prestigious event ever since. They’re maintained perfectly. This weekend they had crispy new sails.

You’ll see in the picture that our team was outfitted in new team shirts, another Riddell LBRW tradition. We were the “Crazy Train,” a name that fit comfortably. Other teams were also wearing team shirts and moving around the boats with a studied familiarity. A couple teams sail these boats nearly every week. Others sail as a team on other kinds of boats. They all knew what they were doing. 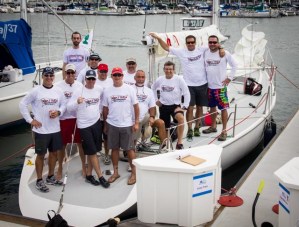 In matching team shirts, the Crazy Train gets ready to set sail.

With all of 45 minutes permitted before the first gun, we had enough time to figure out pretty much what everybody should sorta do. Fortunately, helmsman Trey Harlow had drafted his friend JB to handle the front of the boat, so the front and the back were in good hands. The middle? Some work needed. Some position-swapping. Some encouragement from John.

The boat is big and heavy and slow to respond and likes to keep moving, gathering speed slowly out of tacks. That’s about all we knew when the first gun sounded and we approached the much-too-short start line. Late. John said he wasn’t ready to mix it up with the fast guys this early, especially after last year, but we won’t talk about that.

Tenth. Out of 11. Race and repeat. Ninth. Not so bad when you consider the size of the hill we had to climb. I was assigned the job of standing at the back of the boat trying to look useful—something I’m pretty good at faking. Not a bad gig, really, with a nice view. But main trimmer Jason Donkersley aggravated a back injury and was carted off to the ER and suddenly I had a new job Saturday: main trimmer. Cool. The view’s not as nice, craning your neck to watch the trim and judging whether the top batten tell tale is stalling 50% of the time as John prescribed or 35% of the time, which he knew wasn’t enough, or not at all, which I darn well knew was the right way (as one of the many “captains” trimming on this boat). 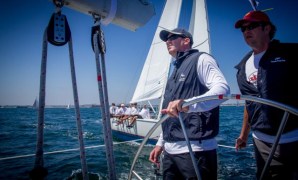 And BANG. Saturday’s first race saw us on the starting line at speed and actually freaking leading at the windward mark and only giving back two places to finish THIRD! “See we know how to sail this boat!” John shouted across the water to no one in particular.

Hubris, of course. The next race we went this way and the wind went that way and we were gargling salt water in last place. Last. The pain was palpable. We recovered for a 9th in the third race of the day and went into Saturday night clinging to 9th overall by one point and staring at a 7-point gap to 8th. On Sunday we scored an 8th and a finale fifth and left the race course feeling very good about the distance we’d come. 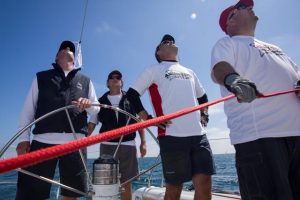 Los Alamitos Yacht Club and Long Beach Yacht Club offered up noisy, liquid parties each night and we got a chance to compare our day with the Viper guys and hear about that mark rounding where Chris Smith was supposed to leave it to starboard and a boat three times his size was supposed to round to port and, wow, it all came out all right. And the expensive Velocitek? Kicked overboard. Fortunes of war.

As we scattered for the airport or a highway dash across the desert, I think everyone was savoring a weekend well spent. I know I was. The weather was gorgeous. The boats and races were fun. Fifteen or so guys in a house worked better than I ever thought it would. Thank you, John Riddell, you crazy SOB, for driving this insane experiment. 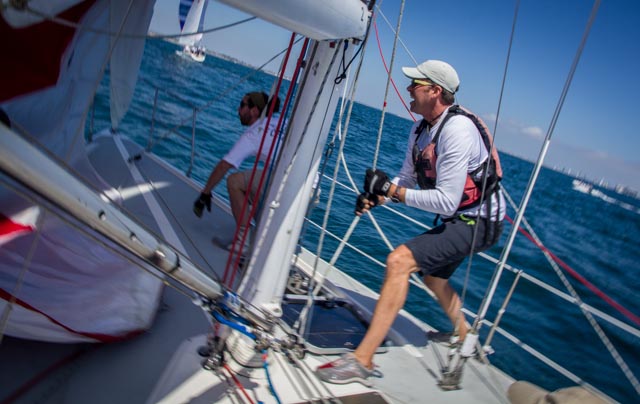 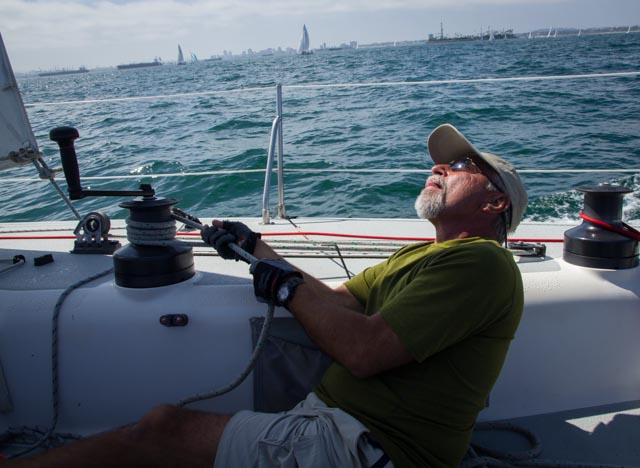 New member and veteran sailor Scott Burkhardt gets into the racing thing. 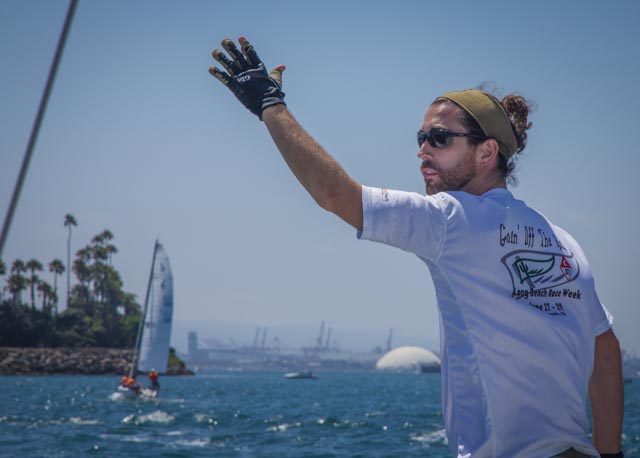 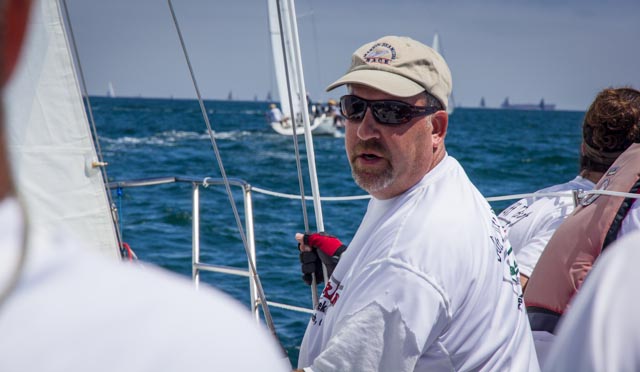 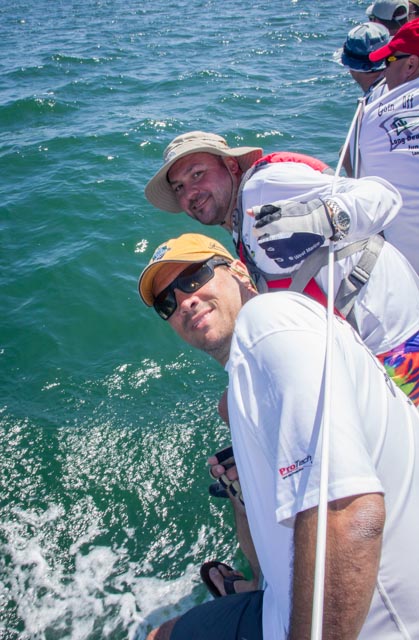 Here’s a video that Rob Gibbs put together of the event (using some of these pictures).

Renew your AYC membership today by clicking on this link. Update your member profile and full members pay the $150 per year dues (life members pay no dues). If you have any trouble, contact Mike Ferring.