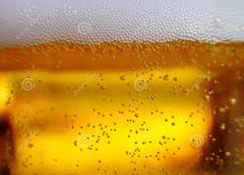 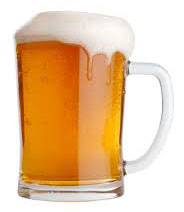 Join us after work on Friday, September 5, from 5-7 pm to lift a beer or glass of wine with other crew or skippers… and maybe find a connection for fall racing.

The party will be at Bluewater Grill, 1720 East Camelback Road (where Camelback crosses over the 51 freeway). A good selection of beers available for the happy hour price of $4, plus some wine choices. AYC will pop for some hors d’oeuvres. To find us, when you walk through the door of the restaurant, just walk straight back to the private room.

The idea is really just to have fun and meet some new people, to connect with someone who might be good crew or a race entrant who’s looking for help. Questions? Check with Steve Brown.

The club bylaws require that we post the names of people who haven’t renewed their memberships by now. AYC’s membership year runs from July 1 to June 30 and your dues are to be paid by the end of July. If you haven’t paid by October 1, you’re dropped from membership.

Before then, we’ll publish the roster and if you don’t pay, you’ll miss out on being listed.

Here are the full members who haven’t paid to renew AYC membership and are now delinquent.

And here are the junior members who haven’t paid to renew and are now delinquent: Spenser Branch, Madison Cordova, Kristian Doak, Luke Marino, and Andre Parmentier.

If you’re one of them, you may pay your dues from this link.

If you have any trouble renewing or if you don’t plan to renew your membership, please contact Mike Ferring. 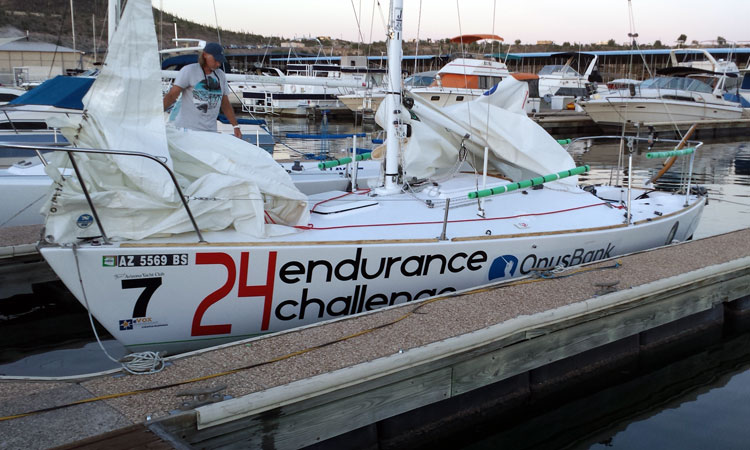 Can a small sailboat sail 100 miles on a four-mile long lake in under 24 hours? After drifting for hours, Victor Felice and his crew were clobbered by a storm that trashed his headsail and obliterated his jib halyard shackle, sending them to the marina for repairs. In the end, 24 hours later, he’d come up a bit short on his goal of 100 miles−hitting just 76 miles.

Here’s a video showing some of the trip, to the tune of Groove from the Soul by Mermaid Rescue from The Endless Luau. For obvious reasons, the video does not include shots of the storm that trashed Victor’s head sail and sent them into the marina.

At 9 am September 6, the crew of Mermaid Rescue departed from Pleasant Harbor Marina for a 24-hour, 100-nautical-mile Endurance Challenge. As far as we know, this was the first time a sailboat had attempted an extended time and distance event on the lake. With a space just about four miles by two miles in which to sail, the challenge demands hundreds of tacks and jibes during day and night to cover the full distance.

The Challenge requires that Skipper Victor Felice and crew cannot stop, cannot receive any outside assistance and must sail for 24 hours and the full 100 nautical miles. Both targets must be reached. Sailing with Victor will be Jeff Coulter, Jeff Middlebrook, Tim Millward and Ian Parkinson.

The Leukemia & Lymphoma Society’s continued advancements over the years are responsible for the blood cancer survival rate doubling and tripling; in some cases, the survival rate has even quadrupled. Donate to Victor’s Challenge by clicking here. 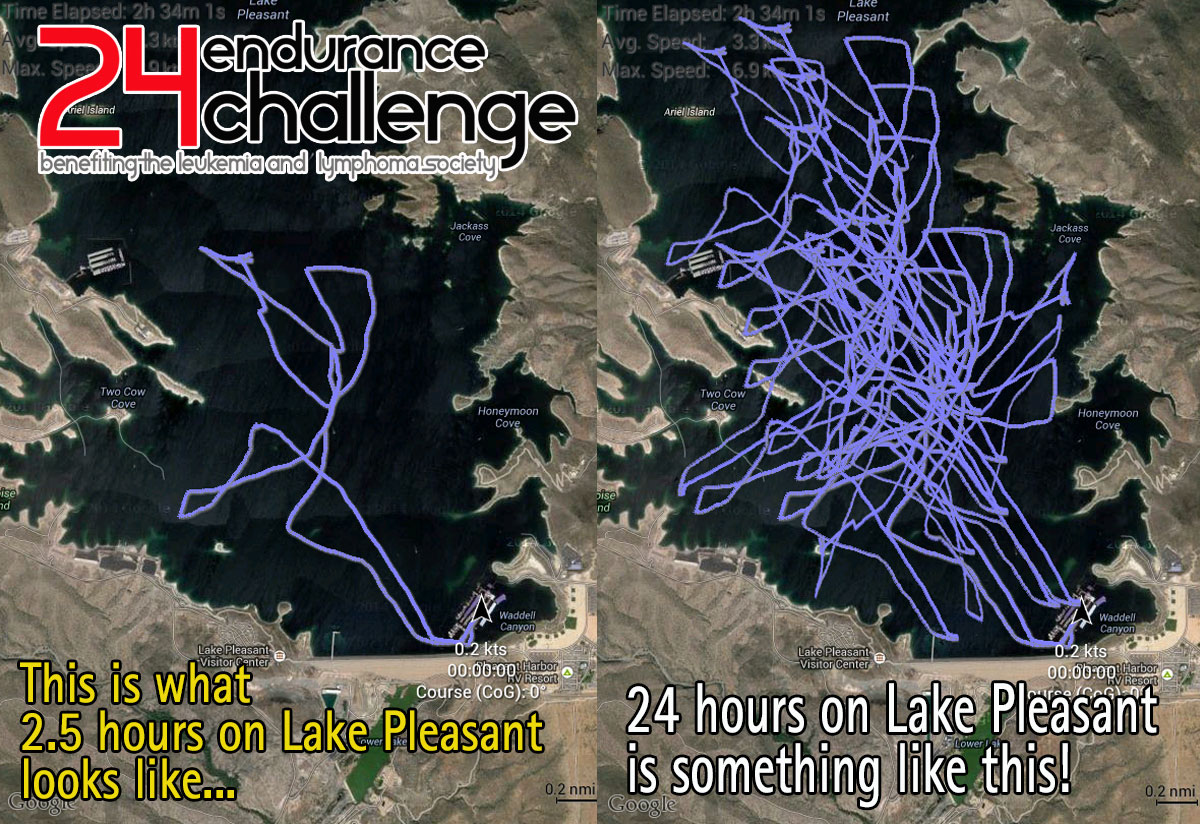 Getting ready for the long sail, dressed up in graphics for the occasion. 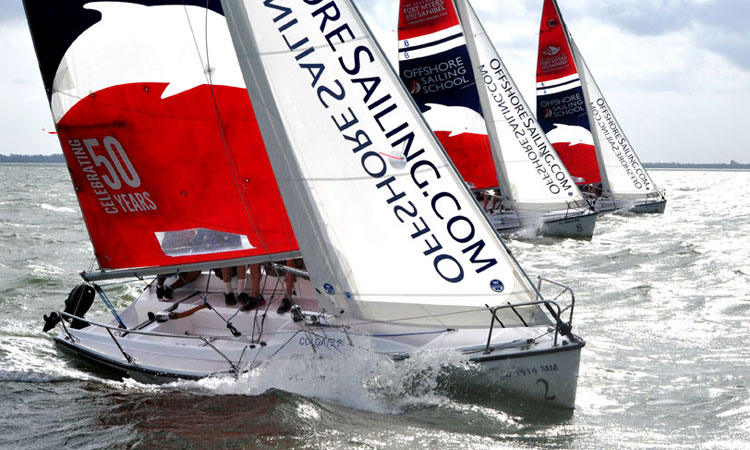 Take a Wild Ride to Sail Better: The North U – OSS Performance Week 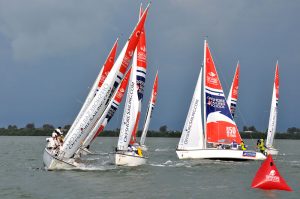 It was sudden and violent. A brutal “bang” and the rig crashed down around us, the boom dragging in the water, the boat skidding to a stop.

“Everyone all right?” asked Rod Favela from his coaching spot on the stern.

We were fine. The boat? Not so much.

It was a downwind run on a Colgate 26, the school boat at the Performance Race Week put on by Offshore Sailing School and North U at Captiva Island on the west coast of Florida, near Ft. Myers. Each spring, North U director Bill Gladstone rounds up a fleet of coaches and 44 students for this intensive, six-day school.

The drill is similar all six days: An 8 am start, rigging boats and heading out to the nearby race area; three hours of racing; then ground school back on shore with lunch; another three hour thrash on the water; and another ground school. I love to sail, but by mid-week I confess I wanted a break from more hours battling the boat and heavy wind. During nearly every session this year the wind blew into the teens and they said it was the heaviest they’ve seen. Really? This was my second trip to the school and it blew just as hard or harder last time! 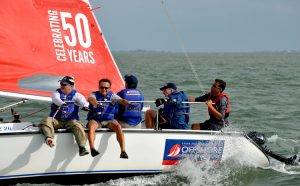 So what happened that dismasted us? We weren’t sure. Maybe something broke. More likely, our relatively inexperienced helmsman may have thrown us into a “death roll,” the spinnaker pole hit the water and the stress took down the rig. Out of 11 racing boats, two were carrying spinnakers in heavy wind. We were one of them.

We began dragging boat parts onto the hull, untangling and untying the mess that seconds before had been a fully-functioning sailboat. By afternoon, we’d been given a back-up boat and we were back on the race course. More starts, more races.

Surprisingly, Steve and Doris Colgate keep a great attitude about these little mishaps. They founded Offshore Sailing School 50 years ago and know that when sailors push the boats this hard, things break. Their shore crew fixes them and sends us back for more. Most of the year the boats are used to teach people to sail or sail better. This one week of high-performance racing has become a school mainstay and in 2015 will celebrate its 15th anniversary. To put a cherry on top of this chocolate sundae, each year Steve and Doris roll out a new suit of sails for all the boats, just to keep the competition close.

Their partner is Bill Gladstone, a fun, funny, upbeat imp who teaches with enthusiasm and stuffs the classroom portions with content. He follows the classroom with a sailing circus act, hoisting himself to the spreaders of a cruising boat, lashing himself on and chasing us around the race course with a video camera. He calls it his “helicopter” shot. By playing back selected video from this perspective during the afternoon debrief, he can point out tactical and trim lessons while it’s all still fresh. 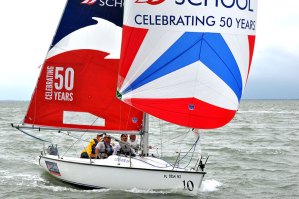 On each 26-foot boat are four students and one coach. The students are required to rotate positions, from helm to mainsheet trim to foredeck to jib/spin trim and back again. The rotation helps everybody understand the demands of each position—and drives home how important good crew work is. The students bring a variety of racing backgrounds, but most are pretty experienced sailors looking for a competitive edge. Nearly half are repeats.

One of the easiest parts of the week is life at South Seas Island Resort on Captiva Island. Our rooms are within a short walk of the boats and Captiva is spectacular spot, surrounded by water from the gulf. Each night, crowds gather on the beach just to watch one of the most predictable and glorious shows on earth: sunset.

What did I learn? On the plane home, I ran over in my mind what I’d picked up this time. Maybe 20-30 things. Many small. Some just finally jelled in my mind after years. There’s nothing quite like racing every day for several days straight to get the rhythm of it. Nothing quite like Rod Favela urging us on from the coach’s box in back of the boat. Even if sometimes it got just a bit too exciting. 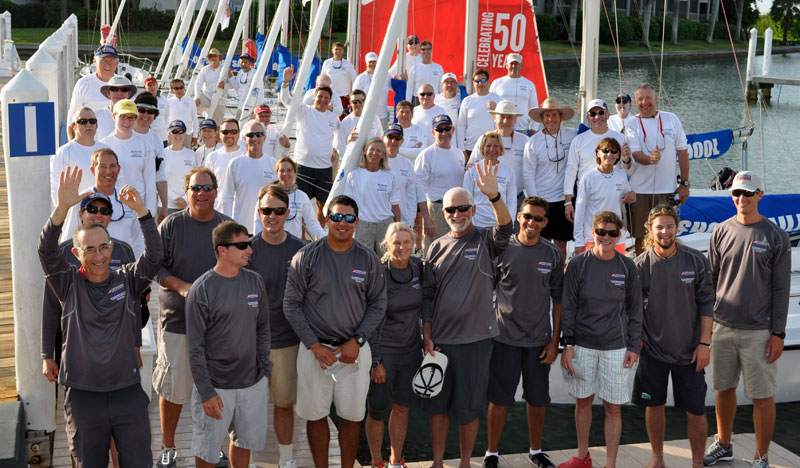 The class photo at the 2014 Performance Race Week. That’s Bill Gladstone on the lower left. 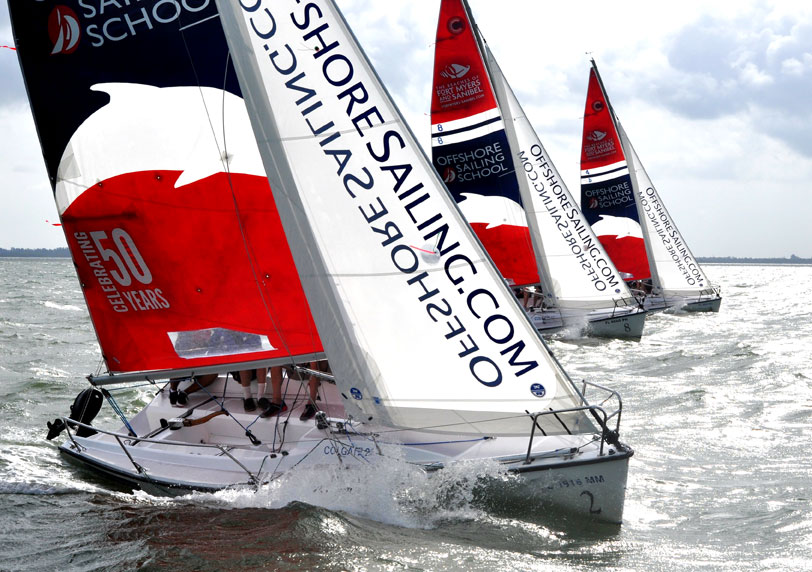 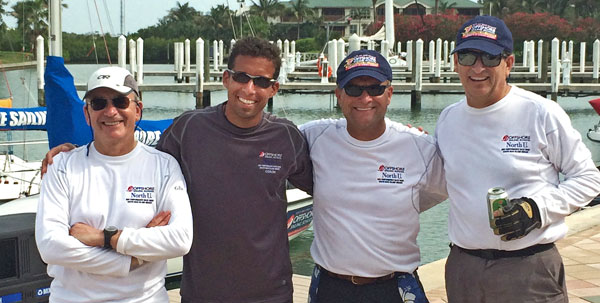 Returning crew. This bunch (plus one other) sailed together in 2012 and were back for 2014. From left: Mark Allison, Coach Rod Favela, Dave Bohl, and Mike Ferring. AYCer Chris Smith also attended the school in 2012.