The scores for week 3 of racing on Tempe Town Lake are posted on the results page, or by clicking here. 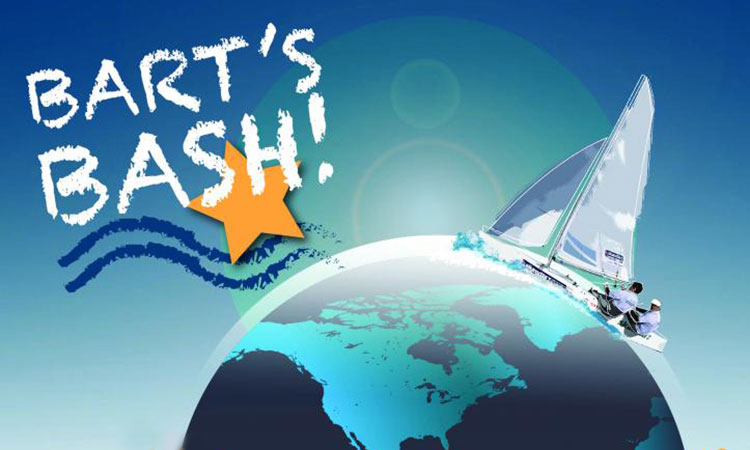 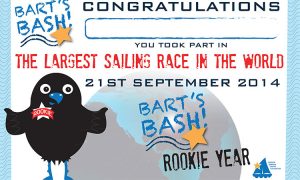 The final results are now in and we not only broke the Guinness World Record for most boats participating in a regatta, we crushed it. Worldwide that day, 16,870 boats participated, sailing a distance roughly equivalent to twice around the world. Arizona Yacht Club was one of more than 500 clubs participating. Bart’s Bash also raised more than $400,000 for the Andrew Simpson Sailing Foundation, which helps kids learn to sail.

We actually got 34 boats to the starting line for Bart’s Bash, named for Andrew “Bart” Simpson, who died during practice for the America’s Cup last year.

Were you there? Download the certificate on the right.

You’ll find the Bart’s Bash results here. After much research, I’ve figured out that the “speed” number you’ll see is meters/second multiplied by a “Bart’s Number,” a handicap number that bears little resemblance to anything else you’ll see anywhere else (but clearly penalizes multi-hulls). Click on an entrant’s name to see the detail. I’ve submitted all the required documentation so that now AYC will be part of the Guinness World Record for largest regatta. Many thanks to the 31 finishing boats and AYC race committee that made it happen! 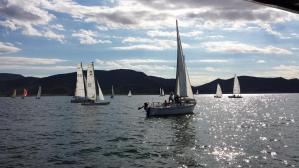 Boats mill around the start line on Saturday (9/20). Some 34 boats ran the race for the Guinness World Record. Photo: Victor Felice

Victor Felice helped organize the AYC Bash and shot the needed pictures and video. Candis and Jeff Middlebrook acted as the required witnesses. Victor and Mike Ferring struggled through the lengthy and complex Bart’s Bash and Guinness requirements. Dave Christensen thrashed through the scoring.

Mostly it was the crews and captains of 34 boats who made it happen.

Thanks to Thom Dickerson and a band of AYC highway cleaners, the Carefree Highway near mile post 25 is a bunch cleaner today. Thom reports that they filled about 40 bags with litter and then headed to the Wild Horse Saloon for lunch. Great work! 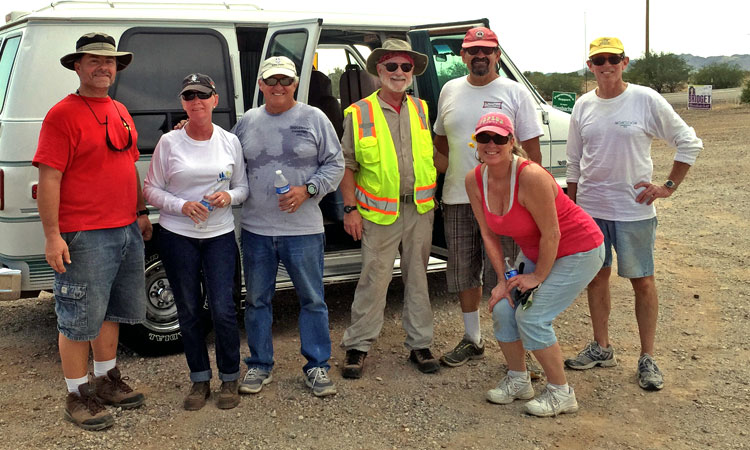 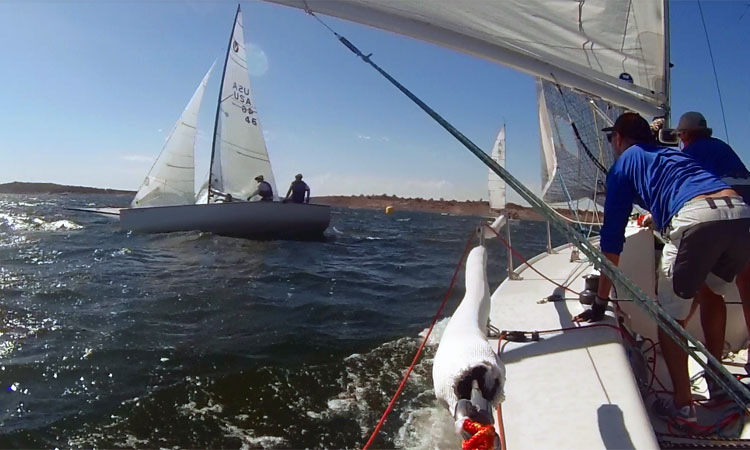 A weekend of contrasts: No wind Saturday. LOTS of it on Sunday. After optimistically drifting for a couple hours or so on Saturday, the race committee sent everybody off on a short dawdle that they then cut short. Sunday? Wow, was that fun! Strong northerly wind held until about noon, letting most fleets get in four races and some wild ones: boats over, boats planing at high speed−a rash of crazy fun.

The scores for week 3 of racing at Lake Pleasant are posted on the results page, or by clicking here.

That’s Greg Jackson and crew knocked down and dragging the spinnaker during a Sunday puff at Lake Pleasant. Photo: Mike Ferring’s rail-mounted GoPro

Commodore Peter Lehrach greeted the new AYC members at the October meeting, including the ones in these shots. Each new member receives a roster, a card, and a burgee. 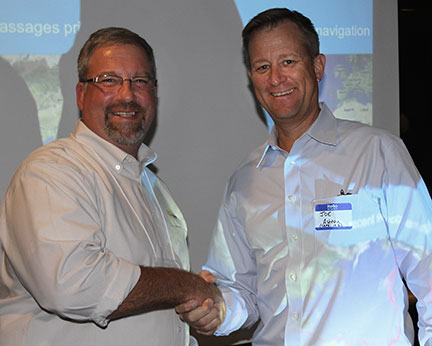 Joe Ashton has been sailing a Capri 14.2 in the adopt-a-boat program. Photos: Chris Smith 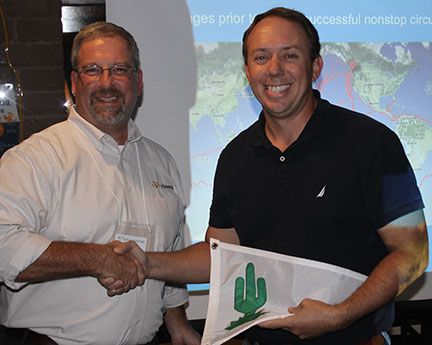 Nat Kemberling and wife Anne will be racing their new J/105. There should be room from children Tyler, Annabelle, and Zander 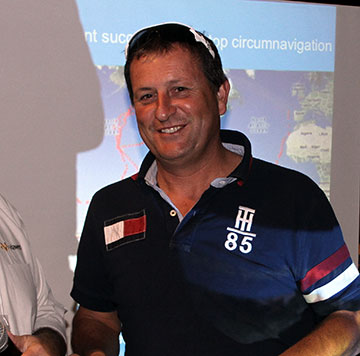 Ian Parkinson has been racing with Victor Felice and says, “I thought I should become a full member.” 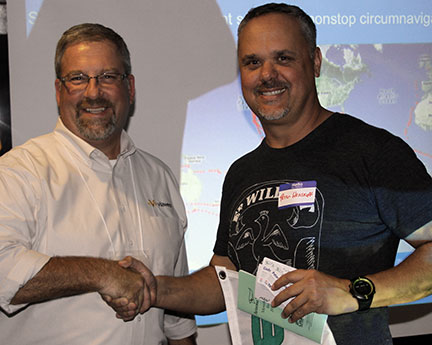 Peter Weiskopf and wife Cindy have a Jeanneau Sunfast 3200 on the coast and plan to sail here too.

The scores for the second weekend of racing at Tempe Town Lake are posted on the results page, or you’ll find them by clicking here.

Our next cleanup of highway 74 near Lake Pleasant will be Saturday, October 25, starting at 9am.

The cleanup will take just 2 to 2½ hours and volunteers will be rewarded with lunch as well as the satisfaction of seeing a large number of blue trash bags lining the highway.

If you’re able to help with the cleanup, please contact Thom Dickerson by email or by calling 602.909.8504. 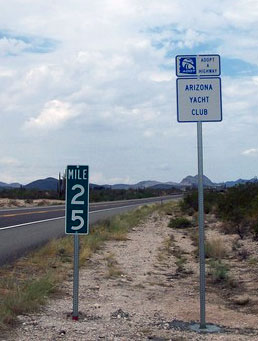 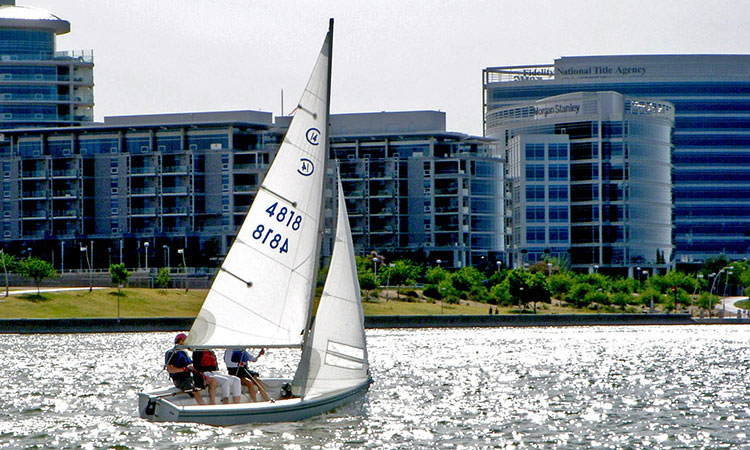 The fall ASF Learn to Sail class is firing up this coming Saturday (10/11) with some 20 students, according to Rob Gibbs, the guy in charge.

We now have the minimum number of volunteers needed for the first weekend, when the Arizona Sailing Foundation puts one instructor on each of the C14 student boats to help the new students actually sail during their very first day of class.

Contact Rob if you can help. A US Sailing instructor certification is not necessary to help out, since the class will be overseen by Mike and Maryellen Ferring, both certified.

The ASF Learn to Sail class is the only US Sailing certified course in Arizona and over the years has taught hundreds of adults to sail. Here’s more information on the course. 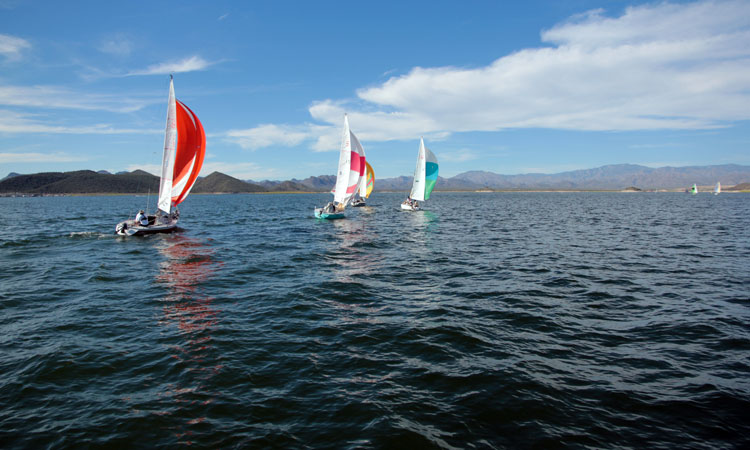 A pleasant weekend on Lake Pleasant, a light air weekend but with fiercely-fought battles in every fleet. Here are the scores.

Thanks to the Catalina 22 fleet for work on race committee and for the secret recipe baked beans.

During one race, Victor Felice (J/24 Mermaid Rescue) had a bumpy encounter with the submerged island near the south mark—and since he thinks it would be neat to win the Blunder Bucket, consented to share his onboard video with you. As he explains it, he’s anxious to be publicly humiliated and, sure, he thinks others might learn something from it. Anyway, here’s his expletive expurgated video. Thanks, Victor, and good luck with the Blunder Vote in December!