Wilson Davis will compete at the Rochester Yacht Club at Lake Ontario, New York, representing Arizona Yacht Club. Surprisingly, Wilson’s father Dennis says Wilson will be the only US entrant, with everybody else coming from Canada. It all happens between July 31 and August 2. 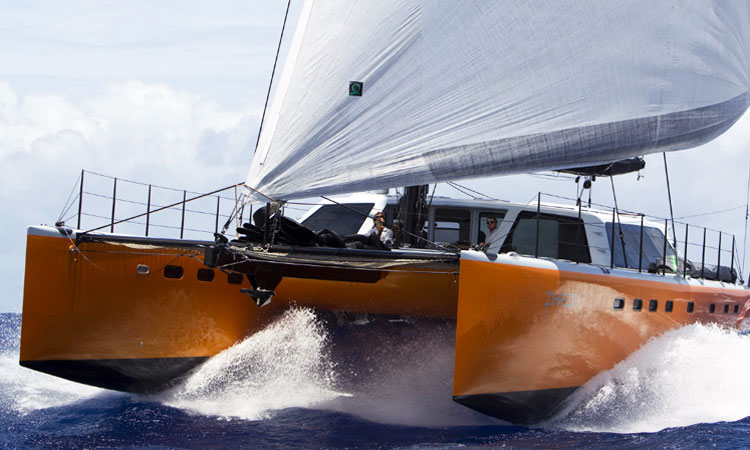 In August, company partner Gino Morrelli will be our guest speaker, giving us a peek at the dynamics of this dynamic sailing sector. We can’t imagine anyone better positioned to do it.

Here’s the official bio: “Gino started out working on race cars and boats in his family’s Southern California back yard as a teenager. He built his first boat with his dad and brother, a 33-foot Crowther trimaran in high school. Soon after he started his first company, Climax Catamarans, designing and building 18-square meter cats. He has been entrenched in onshore and offshore race-boat construction efforts since the early 80’s, designing and managing the construction of a French 60′ ocean racing catamaran, multiple Formula 40’s, the 1988 Stars & Stripes America’s Cup catamaran, Bol D’or racers, Little America’s Cup C-Class cats and many racing beach catamarans. Gino raced extensively on Stars and Stripes ’88 with Dennis Connor and Steve Fossett’s Morrelli & Melvin designed 125ft cat PlayStation, setting Atlantic W-E, 24 hour, Round Britain/Ireland records, and many more.”

The meeting is Tuesday, August 11, beginning at 7pm (but arrive early for dinner). Monthly meetings are held at the Caddy Shack @ Rolling Hills Golf Course, 1415 North Mill Avenue, Tempe, AZ 85281-1205 (map) and both members and non-members are welcome to attend.

The Morrelli & Melvin designed Gunboat Phaedro, which they re-outfitted and modified for more sail area to run in this year’s Transpac. Their boats ran 1-3 in class in this year’s race.

Join/Renew US Sailing and Get Sailing World Magazine

US Sailing wants you as a member and it’s offering two incentives for you to join. First, AYC gets a credit toward training materials. Second, you get a one-year subscription to either Sailing World or Cruising World magazine.

For you to get the bonus, you need to use this link. You’ll find a drop-down menu, select Arizona Yacht Club, and continue. The bonus is good for either a renewal or new membership in our national sailing organization. Deadline for signing is July 31. 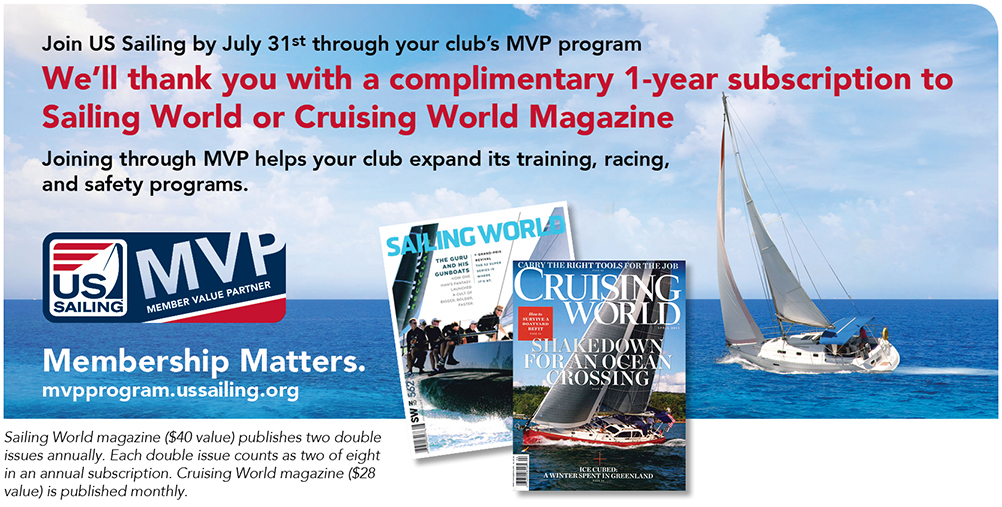 But then you knew he would. 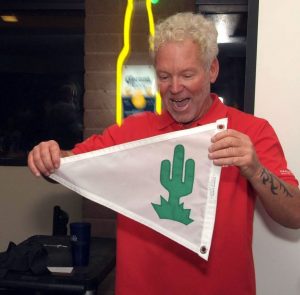 Scot has been the ringmaster of Sailing Anarchy for 15 years, ever since he started it in a peak of “I’m not in the club” anger when Scuttlebutt didn’t publish a letter of his. He stirred the SA jambalaya for years until he figured out it would bubble and steam on its own and he could use his time better by attracting advertisers, which he’s done with great success. They may be wary of the tone and temperature of the thing, but he says it’s hard to deny the Google Analytics results, which he claims rank SA as the most popular sailing website by far.

Like most of us, he’s worried about the popularity of our sailing hobby: how do you attract new players, especially young people? How do you keep the kids interested if they can’t win races (they tend to drift away)? What about the whole foiling thing, which demands money, skill, and lots of wind. And here’s an intriguing question: What boat would you buy and what AYC fleet would you join if you’d just joined? Is there a fleet with momentum right now?

Besides sailing and s**t-stirring, Scot’s other career was as a radio talk show host in San Diego and he clearly has the talent for it. He could entertain for hours by himself, but it helps to have a few foils in the crowd—and John Riddell played the part perfectly, trying to defend Etchells against Scot’s attack. Scot is not an Etchells fan, thinking they represent a branch of uncomfortable, slow sailing despite their popularity with some of San Diego’s best sailors.

I clearly heard Scot say that he’d come back and talk with AYC again. Good idea!

AYC’s Dave and Stacey Haggart finished a strong third in the Capri 14.2 Nationals held the weekend of July 11-12 at Mission Bay Yacht Club in San Diego. Martin and Cedric Lorch took fifth in the regatta.

Perhaps the biggest surprise is that perennial champion Scott Finkboner had a couple weak (for him) races and finished a lowly second. Complete results available here. 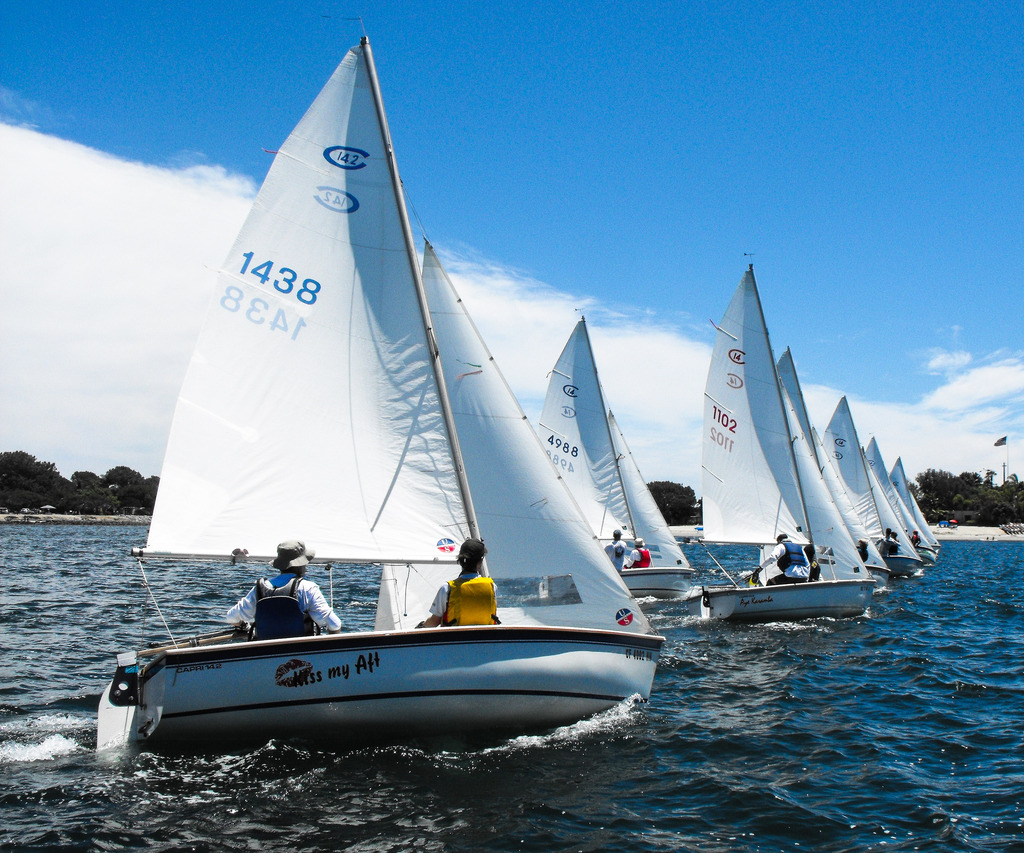 A start during the 2015 C14 Nationals at Mission Bay Yacht Club. That’s Martin and Cedric Lorch closest to the camera. 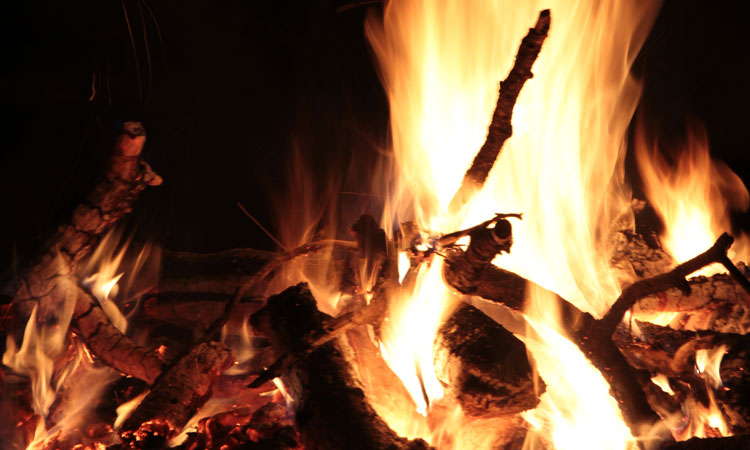 Ready for Some Kool Kinnikinick Kamping? 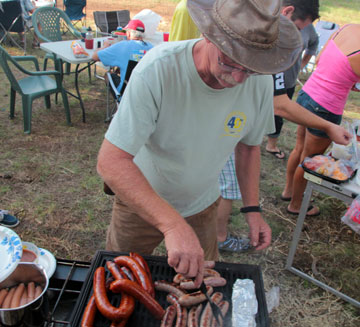 The annual Kinnikinick weekend is Friday-Sunday, July 31-August 2 this year. No need to register; just show up in the cool pines of Northern Arizona.

Once again Steve Nahkala will be heading up the trip to the cool and people will begin to filter into the campsite Friday, ready to enjoy the remote beauty of the location and the fun gathering of AYCers and friends. The activities are as rustic as the surroundings, with “pasture golf” and horse shoes and Liar’s Dice.

Here’s much more information on the event, including map directions.

Campos Pull Out of the Transpac

Saturday morning (7/18): Christina and Steve Campo have abandoned their Transpac effort and are returning to LA.

The Transpac tracking system tells the story. Their lime green icon is pointed back at the mainland while the rest of the competitors are moving toward Honolulu. The brief description explains that they had a problem with the rudder on their Hobie 33, but the crew is safe and well. They were moving at a reduced speed of just three knots.

You can follow their progress here. Look for the boat Bazinga. 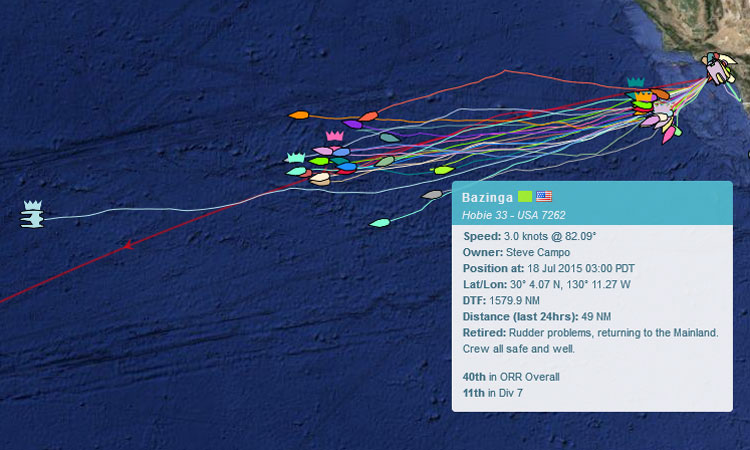 The tracking snapshot on Saturday morning (six hours delayed). That three-pronged object way out in front is the trimaran Lending Club 2, which was not in the race but has now finished, setting a new speed record for the trip of three days, 18 hours, knocking a day off the record. The next wave of fast boats can be seen just off the California coast, but on Saturday morning they were caught in light air and were moving slowly. 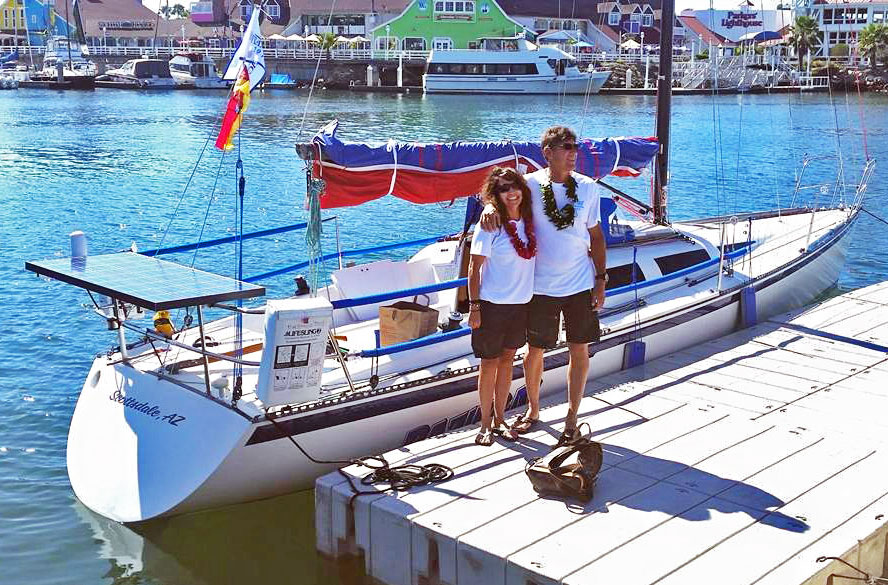 Christina and Steve Campo moments before they shoved off for a little sail to Honolulu in Transpac 2015. Unfortunately they won’t be getting leis in Hawaii.