Victor Felice sails his J/24 with a video camera swinging on a gimbled mount on his stern rail, which makes for some interesting still pictures, like this one.

It makes even more interesting videos, some of which Victor edited into this three-minute highlights reel this November. Enjoy! 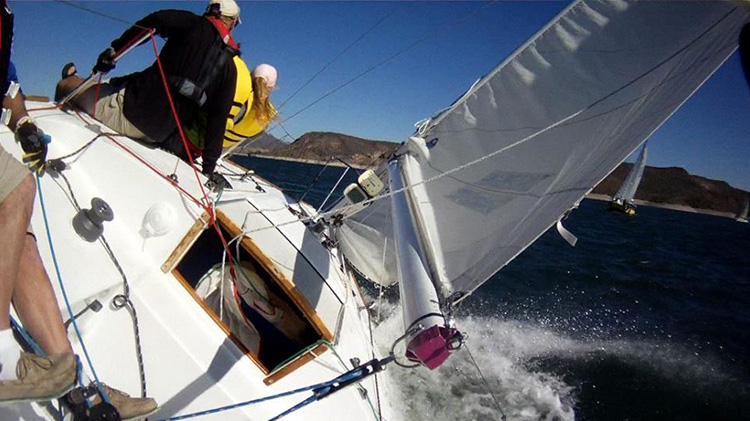 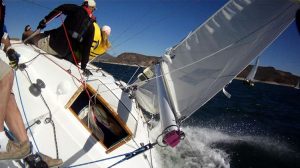 It was an experiment: A one-day weekend, a Saturday-only final weekend of the fall race series and it began with a roar. Chuck Sears said the wind touched 40 mph on his boat’s instruments. Too much for racing, and the RC put in at Scorpion Bay to wait for the wind to ease. By noon it had come down enough to bring a screaming start and by mid-afternoon the wind was delightful.

The scores from Week 5 of racing at Lake Pleasant are posted on the results page, or you’ll find them by clicking here.

The wind was so light it almost couldn’t be felt, but that didn’t stop these brave sailors from facing down the calm to get in two races. Sure, they were snail sail races, but sometimes those take the most concentration—and certainly the most patience!

The scores from the Saturday Edition of racing at Tempe Town lake are posted on the results page, or you’ll find them by clicking here. 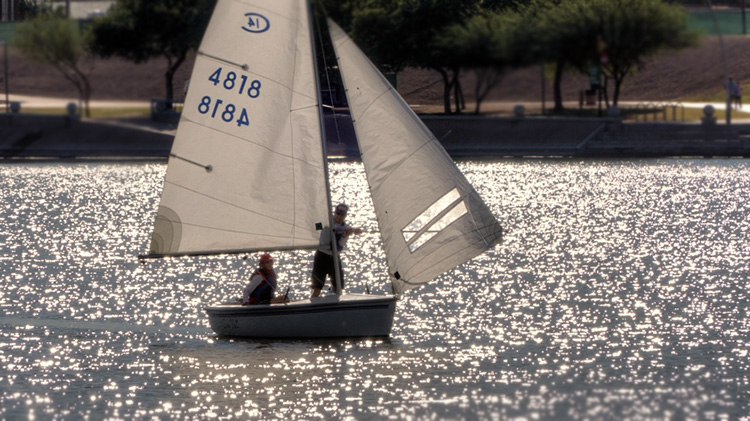 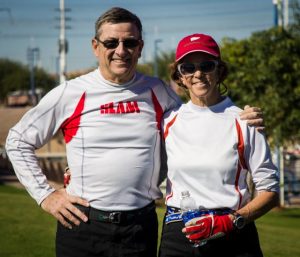 Mike and Maryellen Ferring. Maryellen won the Ruth Beals Cup for the second year in a row.

Maryellen Ferring gets to keep the Ruth Beals trophy for another year.

The trophy goes to the winner of the annual Ruth Beals Regatta, which celebrates women in sailing. The rules permit a male as crew, but a woman has to be on the helm of the one-design Capri 14.2 boats. This year Maryellen and Mike Ferring managed to score three bullets and a second place to beat Cindy Pillote (with Wilson Davis), Kylie Jenkins (with Chad Hargrove), and Suzette and John Bush.

Many thanks to Fleet Captain Steve Brown for serving as PRO and Tony Chapman and Larry Green for helping out. At the conclusion of racing, everybody gathered on the grassy knoll for a picnic lunch provided by Chick-fil-A, punctuated with champagne and Suzette’s birthday cake. 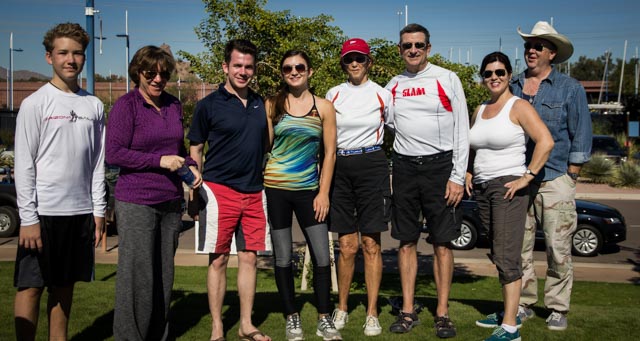 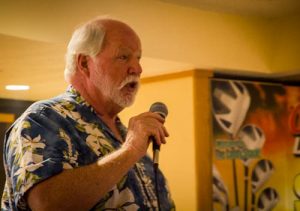 It had to be one of the most entertaining America’s Cup campaigns in history, if for no other reason than the style of its prime personality: Ted Turner. Ted took the ’74 winner Courageous back on the water against newly-designed competition and won it all. Throughout the challenges and Cup races, Dick Enersen was there with a film crew, often with the camera on his shoulder himself, and turned out a documentary that still holds up well today, nearly 40 years later.

Tuesday night (11/10) Dick showed the film and talked about how it was made and what it was like to be so close to something so momentous. He had an advantage as the director and producer of the film because he was an experienced sailor who had actually crewed on a winning AC boat himself, the 1964 champ Constellation. That made it possible to convince sailors to let him aboard with his camera and he came away with some great footage. “I knew where to shoot because I knew where people would move on a tack,” he says.

Now working in philanthropy and still sailing for the fun of it, Dick recounted that 1977 action to a crowded Caddy Shack monthly meeting.

For December: the Buccaneer Gift Exchange on December 8. 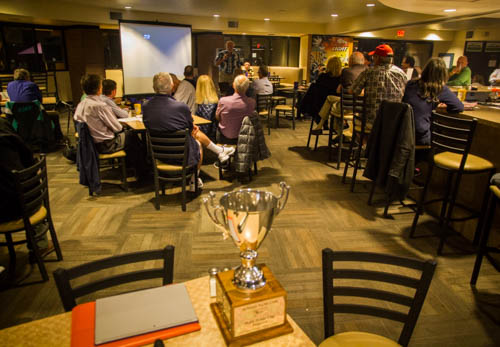 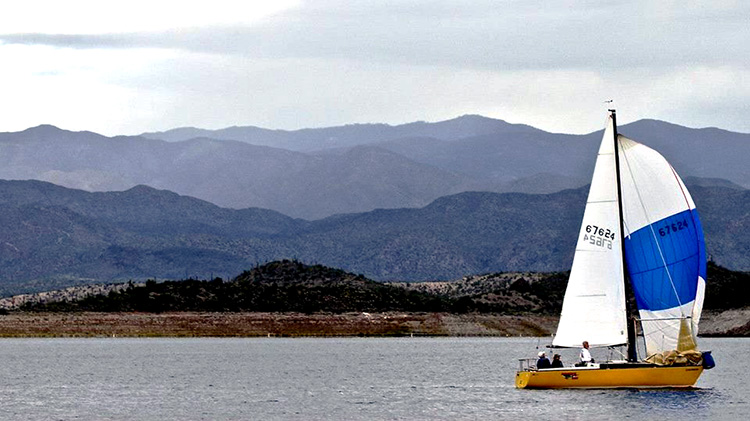 A beautiful weekend on the lake for November 7-8, with a challenging mix of big wind, dying wind, and wildly shifting wind. On Saturday, racing was late starting as the Whaler went on a rescue mission to help a turtled Hobie, but there was still wind remaining to send us all out for a nice afternoon. Sunday morning we had just two hard-core fleets, the PHRF spins and sportboats, plus a morning gaggle of fast-flying multi-hulls. The wind passed quickly (and painfully) through the shifting phase and came back long enough to run another couple races.

The scores for week 4 of racing at Lake Pleasant are posted on the results page, or you’ll find them by clicking here. 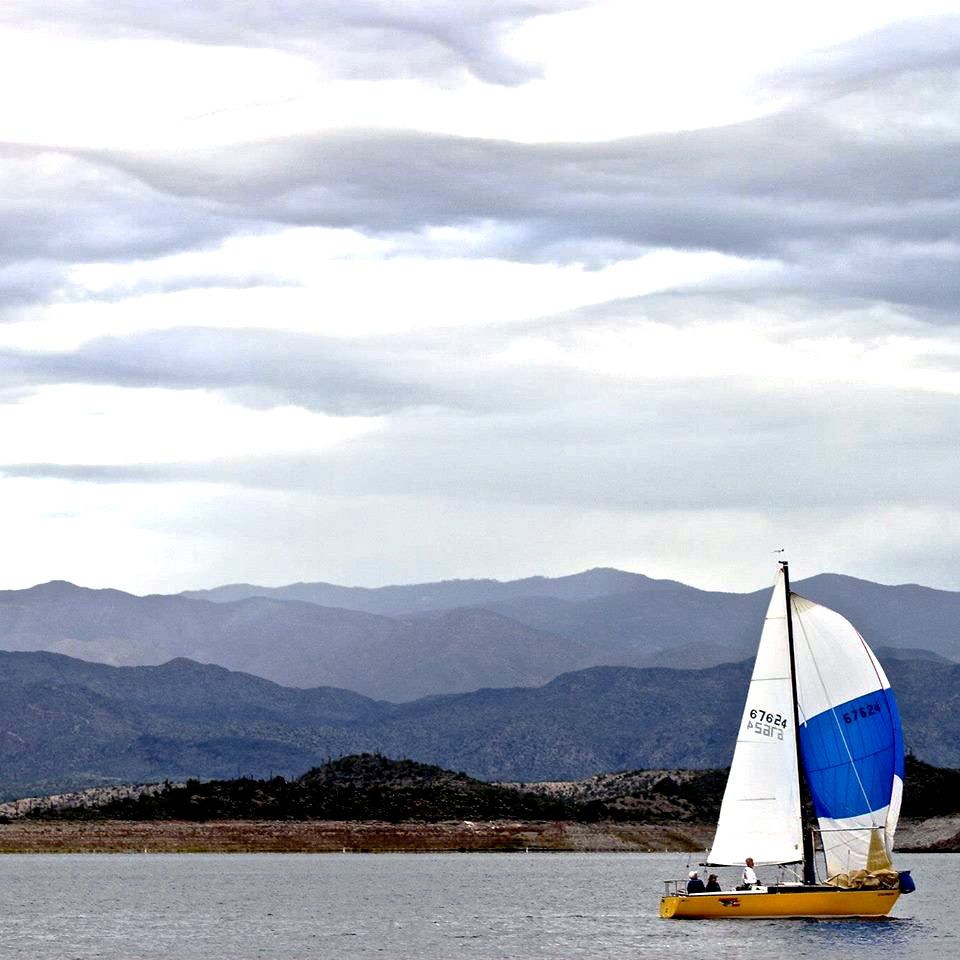 The scores for the very light wind week 4 of racing at Tempe Town Lake are posted on the results page, or you’ll find them by clicking here. 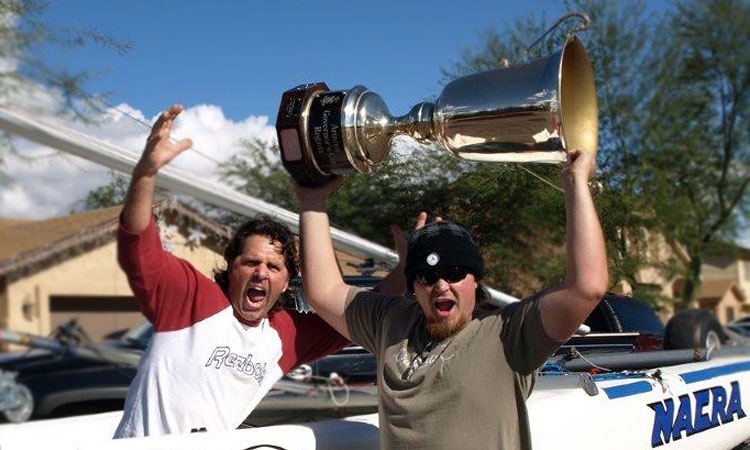 Registration is open for the Governor’s Cup long distance race, scheduled for Saturday, December 5. The entry and race courses are now posted here.

There’s just a $10 fee for entry. Then, it’s a day sail across Lake Pleasant—a feat accomplished by zig-zagging from end to end and back again. Here’s the one-page Notice of Race and Sailing Instructions. You’re invited for appetizers served at the Pleasant Harbor Marina restaurant after you finish.

While it’s a race, it’s also just a nice day on the water that could extend into the evening in light air (but hasn’t gone that long before).

The winner of the race gets his or her name engraved on that gigantic trophy and gets to show it off for the next year. The rest of us get a nice day zig-zagging.

This is a pursuit race, which means boats will start at different times based on their PHRF ratings, with the slowest boats leaving first and the fastest leaving last. The winner will be the first boat to complete the course and cross the finish. Because of difficulty in matching monohull boats and multi-hull boats, this year the two types will race separately and the multi-hulls will receive a separate perpetual trophy.

Yeah! Brett and Crew Johnston won the Governor’s Cup in 2014 and got to keep it for a year.

Click on the link to find your start time for the 2015 Governor’s Cup Regatta.

29 boats registered as of Tuesday afternoon .

This is a pursuit race so your handicap is built in to the time you start. Find your boat on the list and your start time.