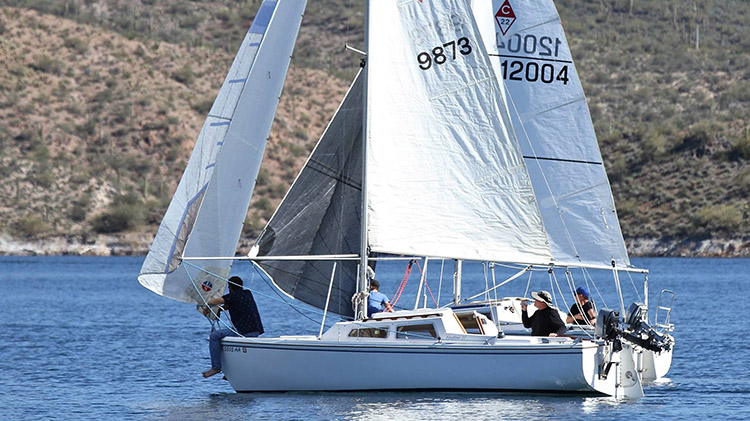 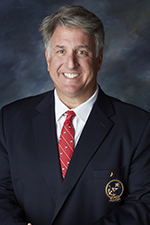 Our June 14 guest will be Mike Dorgan, Rear Commodore of the San Diego Yacht Club and owner of Dorgan Yachts, a San Diego yacht brokerage. Mike will be talking about all the different ways we Zonies can take advantage of the sailing playground in San Diego, including:

Mike has mounted Olympic campaigns in the Star class, campaigned both the Star and Etchells to world championship level, and he’s been on America’s Cup teams (which is how he made it to San Diego).

The meeting is Tuesday, June 14, beginning at 7pm (but arrive early for dinner). Monthly meetings are held at the Caddy Shack @ Rolling Hills Golf Course, 1415 North Mill Avenue, Tempe, AZ 85281-1205 (map) and both members and non-members are welcome to attend. 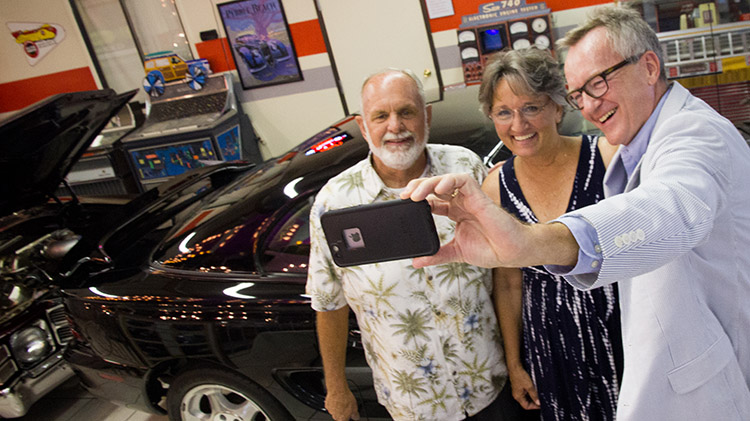 Your new AYC Board of Directors is in charge now, taking office amid shiny classic cars at the annual Commodore’s Party held this year at the Martin Auto Museum. Here are some shots by Mike Ferring:

The evening’s top award, the US Sailing Sportsmanship Award, was presented to Wendy Larsen for her willingness to jump in and help (including organizing the Commodore’s Party). Paul Miachika received the big punch bowl for Club Champion, accepted by his crew, Rob Gibbs. The Blunder Bucket went to Chris Smith, pretty much for being Chris Smith, but specifically for launching his spinnaker upside down.

ASF President Cindy Pillote recognized Scott Burkhardt for his considerable work organizing ASF’s educational programs, presenting him with the “Heavy Lifting” award. George Tingom was given a special award for his hard work and dedication to ASF over the years. Ethan Swartz received the Linderman Most Improved Junior award and Ema and Wilson Davis got the Wayne Jason Tucker Outstanding Junior Award. 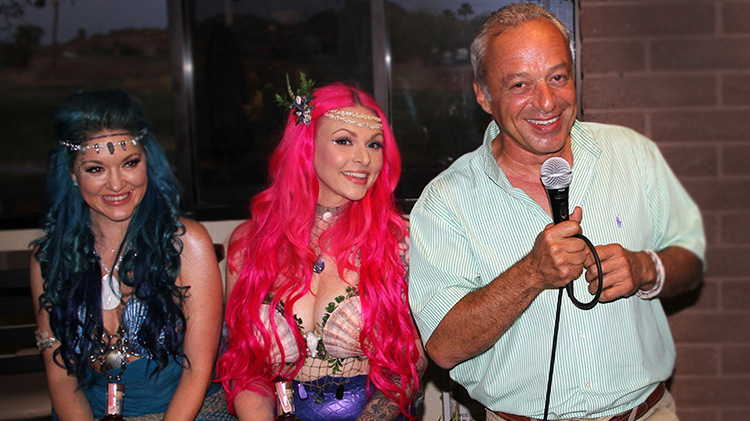 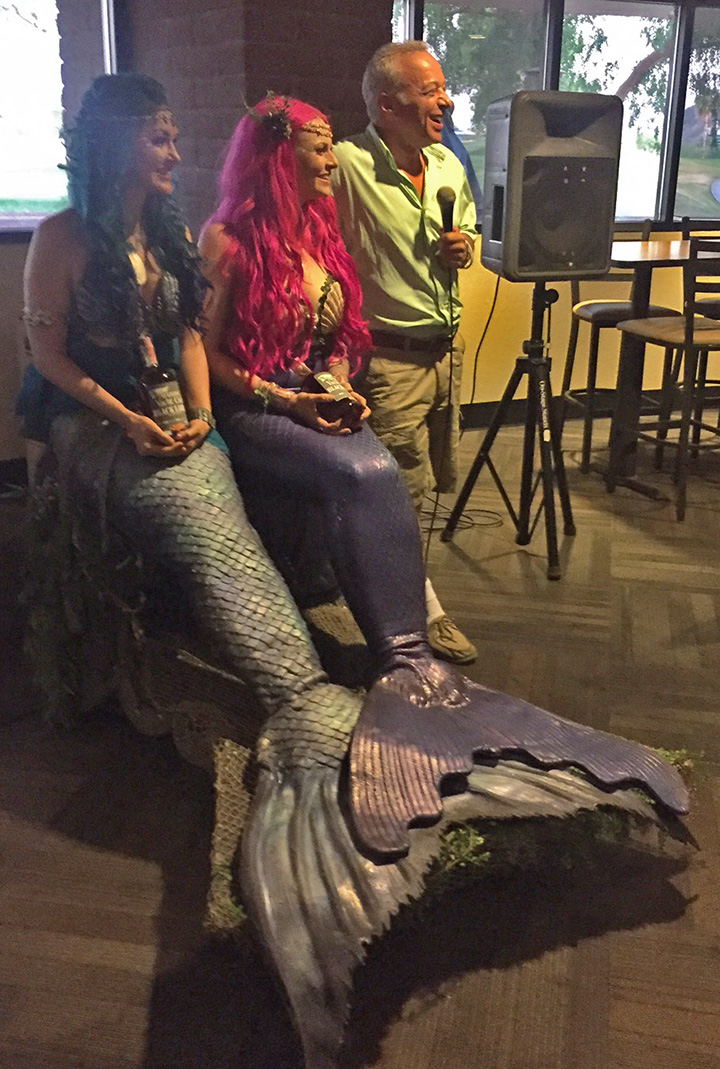 With great finfare, Rear Commodore Victor Felice Tuesday night (5/10) announced what he believes is an AYC exclusive: the only yacht club in the country with its own private-label rum.

Distilled at the Thumb Butte Distillery in Prescott, this dark rum appears with the AYC logo in small-batch, numbered bottles that were sold at the meeting for the wholesale price of $25 per bottle.

The new rum arrived with two rescued mermaids, who posed out of water while a big crowd of AYCers sampled the new brew.

Victor and Thumb Butte distiller Dana Murdoch conspired to produce the new rum, which will also be served at the Commodore’s Party.

The distillery has been the winner of multiple awards, including Silver at the 2015 Los Angeles International Spirits Competition (Gin) and Bronze (Rye). Here’s more about Dana Murdoch. 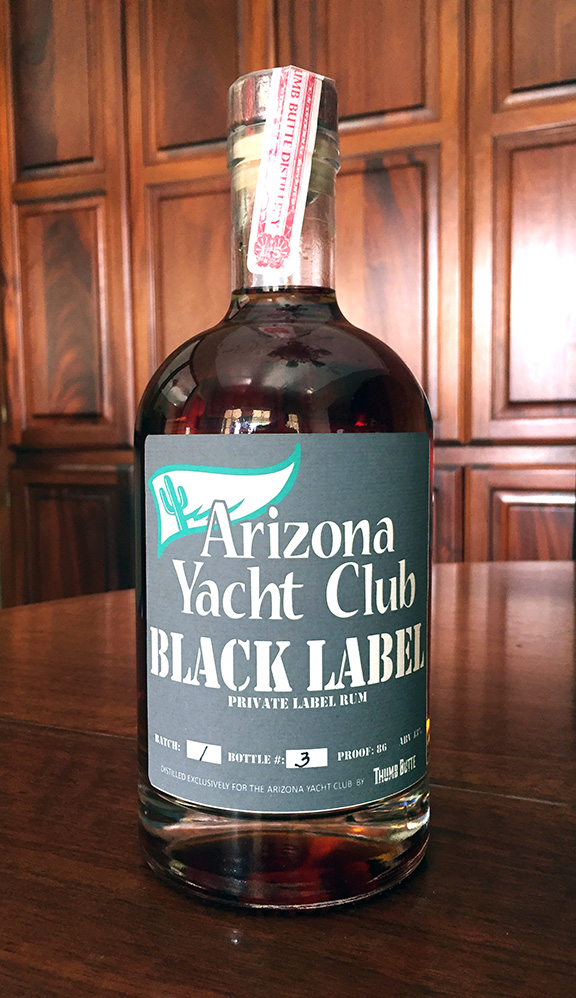 A bottle from the first batch of AYC private-label rum. Photo: Mike Ferring 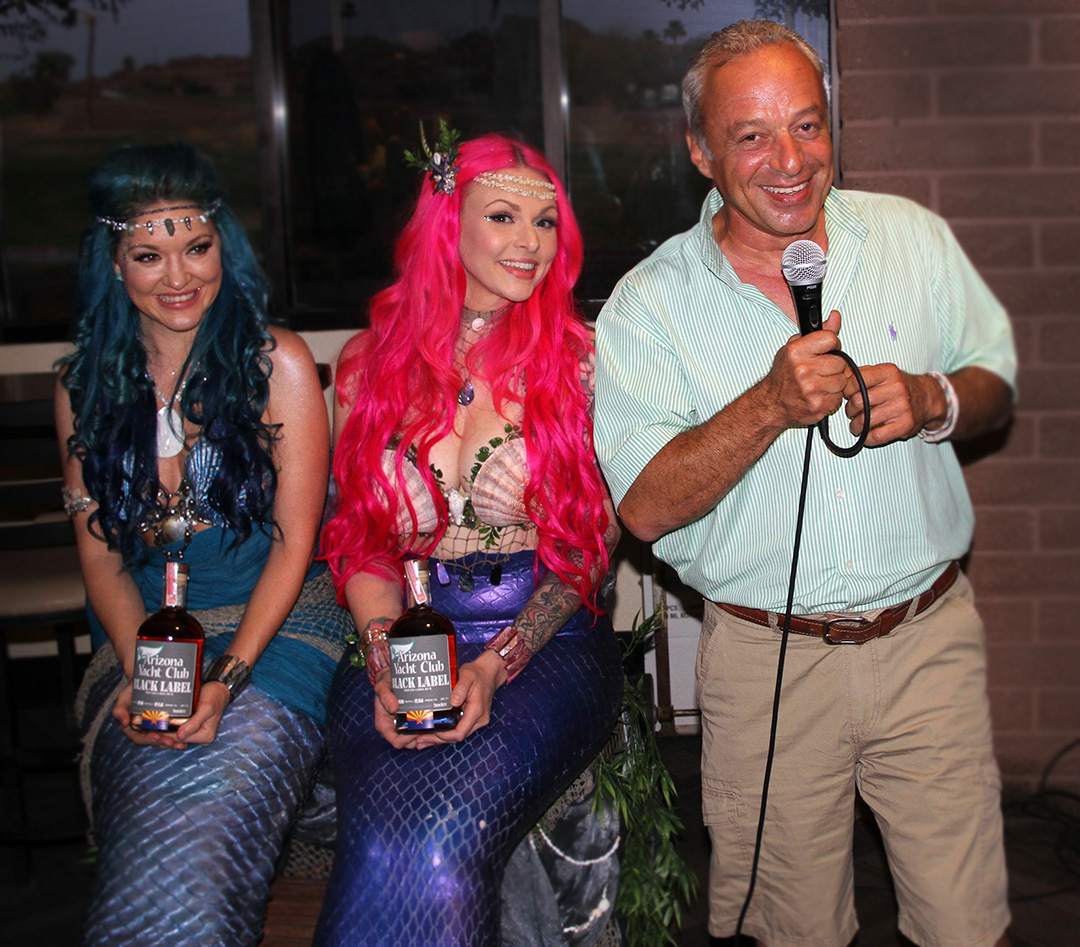 Another shot of Victor Felice and his rescued mermaids. Photo: Chris Smith 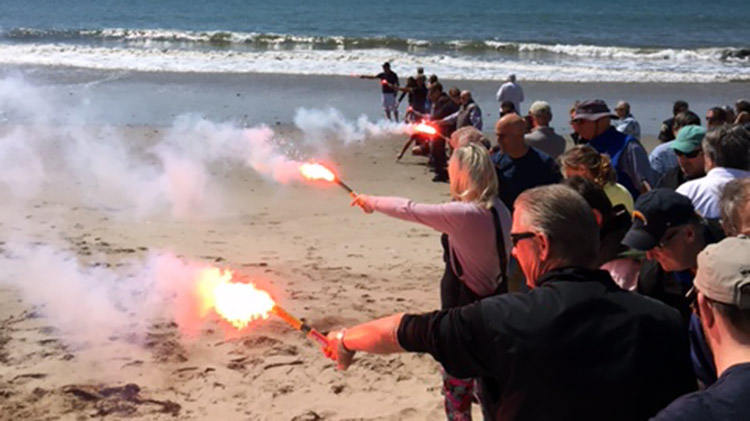 May 8, 2016 In Education News, Member Interest By Mike Ferring

Consider Taking a US Sailing Safety at Sea Course

The US Sailing Safety at Sea course is an excellent way to get up to speed on staying safe on a sailboat. In one or two days, you’ll learn (or be reminded) about everything from PFDs and EPIRBS to weather and first aid. The two-day version of the course will even dump you in the water to try out some of this stuff.

You’ll find out more here, including being able to search and register for courses being offered within driving range of Arizona. For instance, there’s one scheduled for San Diego on July 30-31, at the Silver Gate Yacht Club on Shelter Island. Here’s a flyer describing the course in more detail.

Maryellen and I just attended the one-day course at Santa Barbara, which was also taught by Bruce Brown, who you may remember from his talk to an AYC monthly meeting a couple years ago. Bruce is an excellent instructor and entertaining speaker and runs most of the courses on the West Coast, including the upcoming one in San Diego.

The class tries out various flares on the beach in Santa Barbara. Photo: Art Vasenius 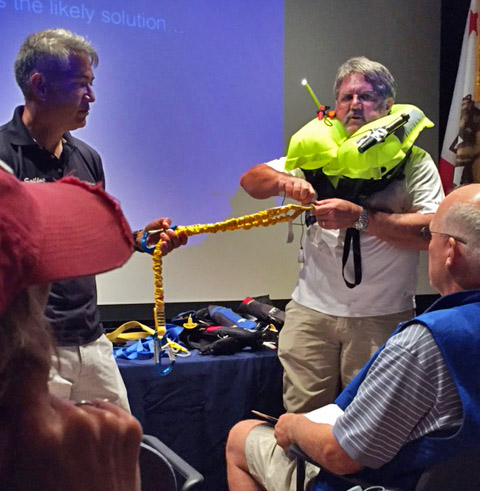 Bruce Brown is the guy with the lime green PFD around his neck and the tether keeping him the classroom. Photo: Maryellen Ferring 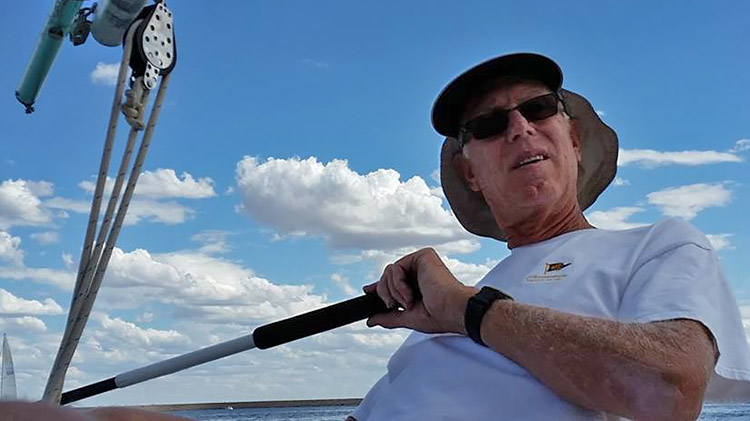 May 8, 2016 In Racing Updates, Sailing News By Mike Ferring

Paul Miachika and crew Rob Gibbs are the 2016 AYC Club Champions. There’s no second place in this regatta, but if there were, it would be Skip Kempff, followed by Mike Ferring, then Dave Haggart and Tom Baker, then Charles Ellis and finally Cindy Pillote.

The race committee and competitors ended up chasing the wind all day when the fleet champs came to Lake Pleasant Saturday (5/7) to decide the 2016 Club Champion.

The wind came in all types and directions and everyone struggled to keep up. The scores showed the results, with all skippers turning in a good race and often several bad ones, keeping the regatta close right to the end.

A big thanks to the Santana 20 fleet, whose members turned out seven boats for the day of racing. While there were considerable differences in the way the boats were rigged, they proved to be fairly even matched. Mark Howell calculated that “the fastest boat had 19 points (averaged a 2.7 finish) and slowest 33 (4.7). For seven boats, fourth place is in the middle—not a real big spread.”

And many thanks to the team of race committee volunteers headed by PRO Wendy Larsen and to Racing Fleet Captain Steve Brown, who organized and carried off this annual regatta.

Here’s a race-day video shot and edited by Victor Felice. 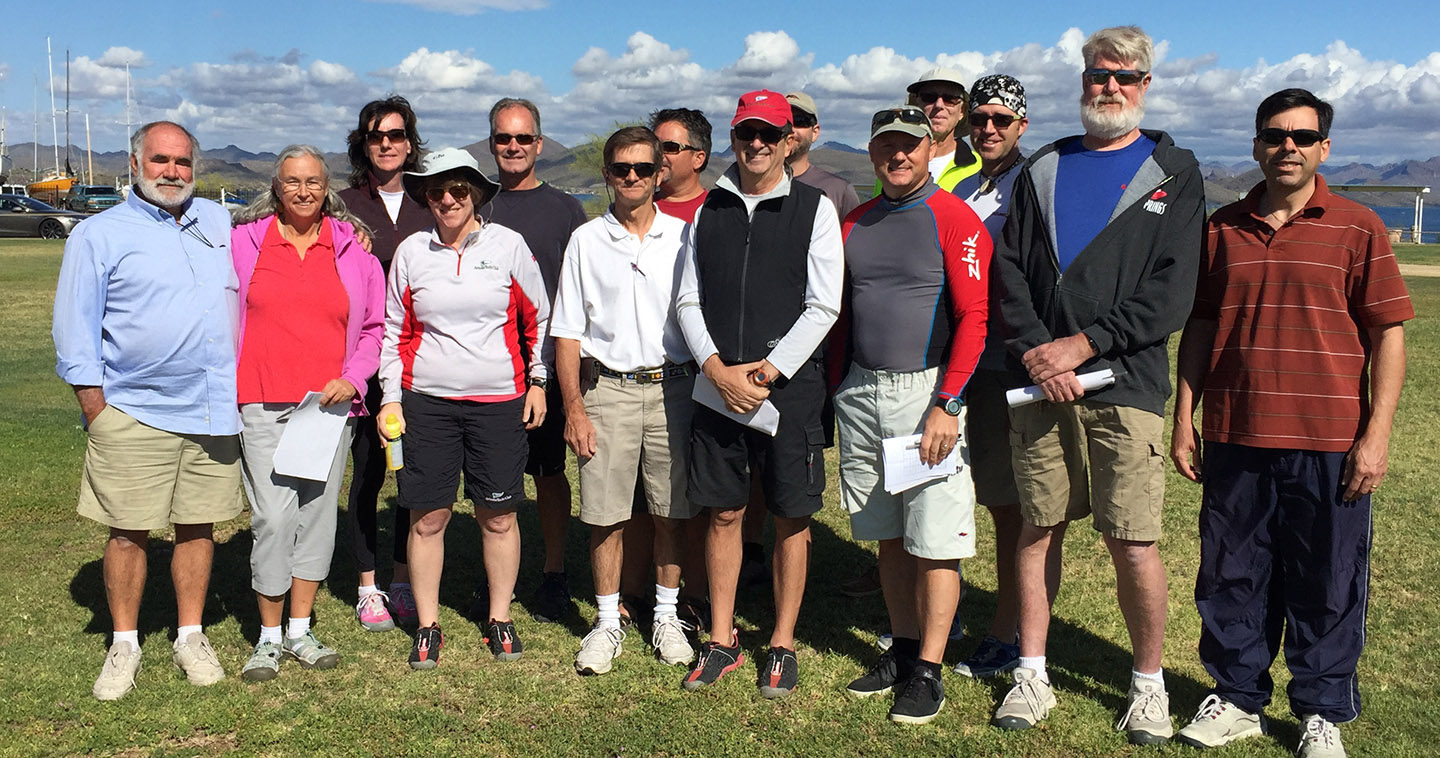 The class photo: The skippers and crew line up before racing for the Championship 2016. Photo: Mike Grijalva 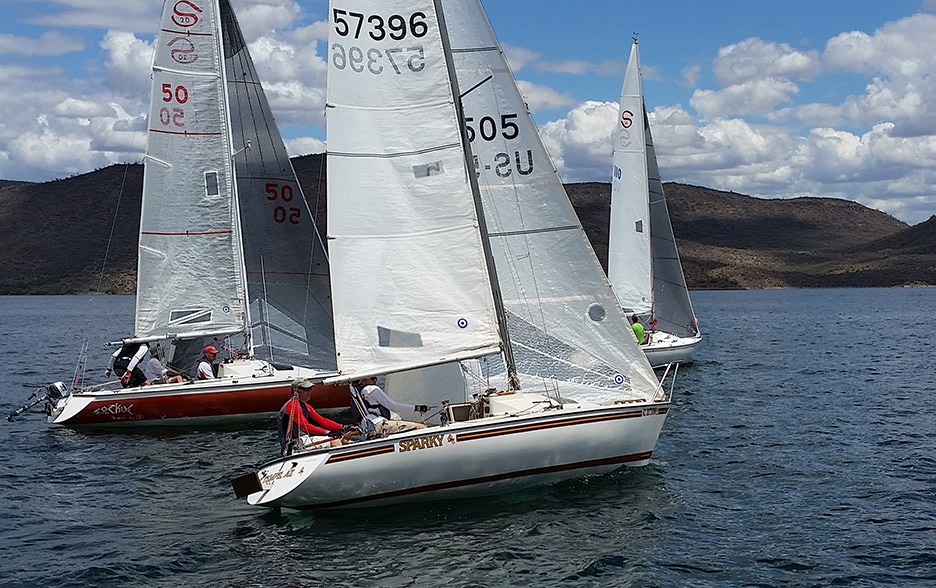 One of the light wind race starts. Photo: Mark Howell 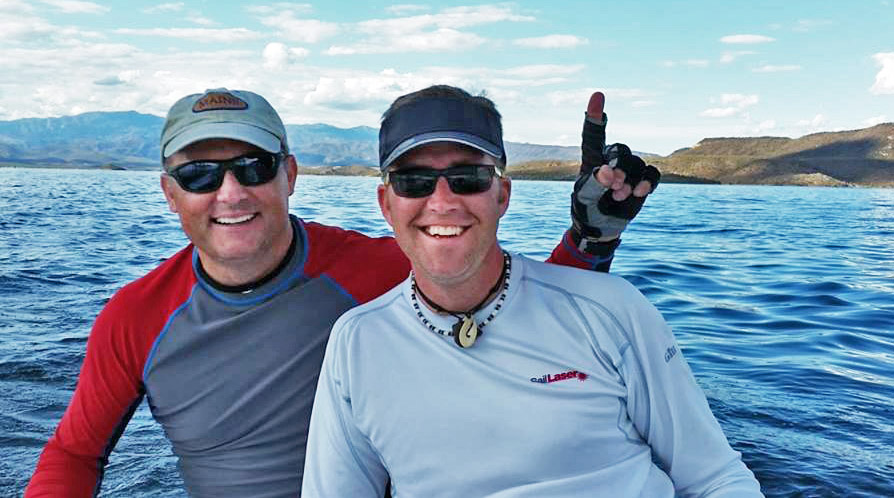 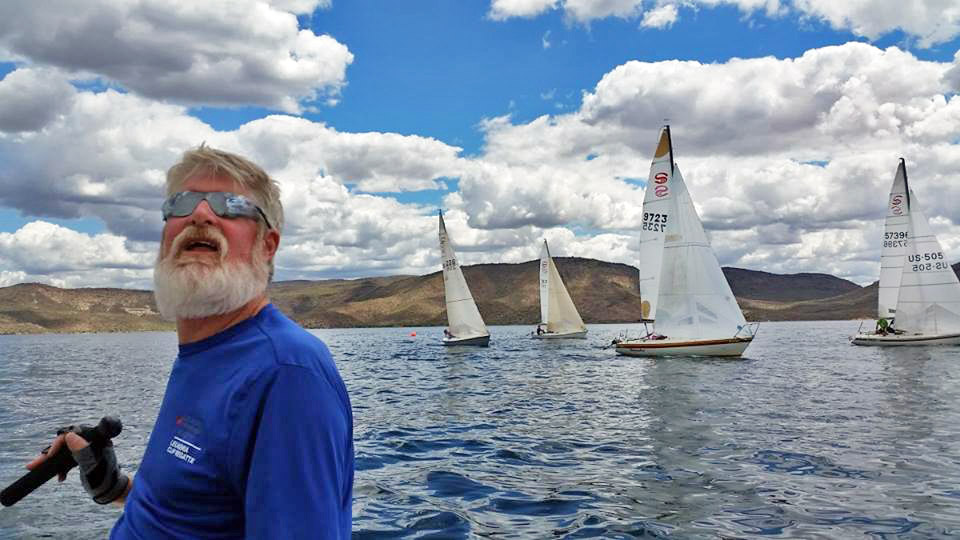 Tom Baker at the helm of one of the Santana 20s. Photo: Victor Felice