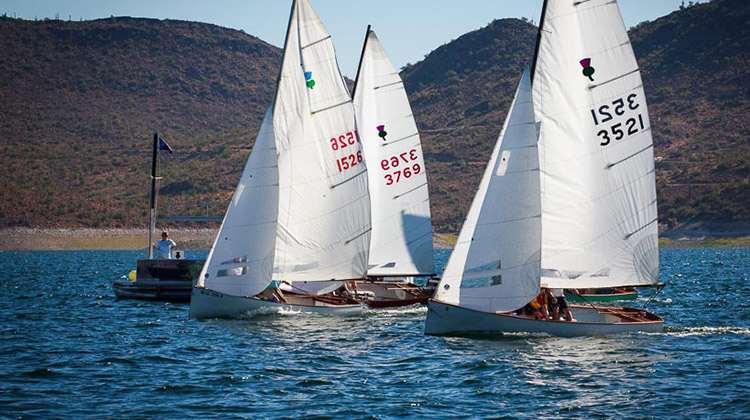 Strong wind greeted us on the final weekend of the fall race series, finally gasping for a lull on Sunday afternoon and leaving us with this list of winners: Steve Grothe overcame a missed first weekend by firing four bullets on the last Saturday, putting him ahead of Bob Worrall in Catalina 22 on a tie-breaker; Fred Rahn won multi-hull; Martin Lorch put his 222-rated Santana 20 up against the 88-rated Hobie 33 of Paul Liszewski and won PHRF Spin; Tony Chapman won PHRF Sportboat; and Jason Rziha beat Skip Kempff by three points in Thistle.

Congratulations to the winners and to everyone who competed this fall.

The scores for the final weekend of racing are on the results page, or by clicking here. 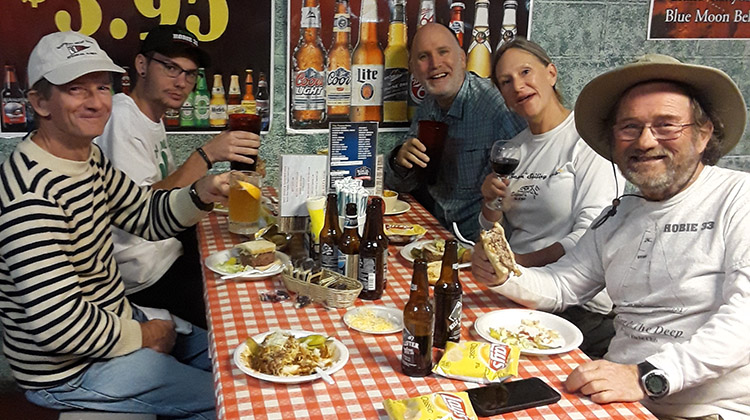 After the racing, the champ buys at Wild Horse. Martin Lorch (left) pops for dinner for the Rolling in the Deep crowd and the photographer, Marshall Williamson. 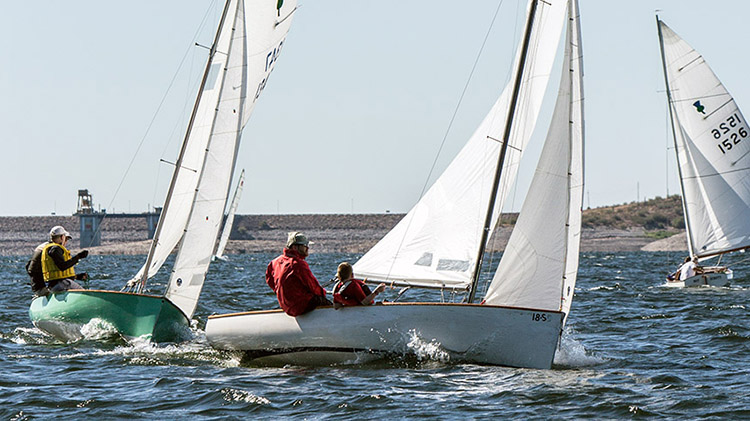 Thistles rounding this fall. The final results were about this close, with Jason leading Skip. Photo: Charles Landis 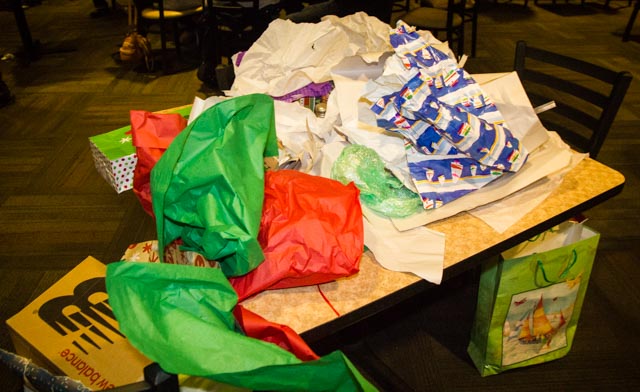 December’s monthly meeting brings the annual AYC gift exchange, a gift exchange with a twist. You might say twisted, even. The meeting is at 7 pm, Tuesday, December 12, at the Caddy Shack @ Rolling Hills, 1415 North Mill Avenue, Tempe.

Here’s how the gift exchange works:

Some of the gifts can be pretty weird, but if you’re looking for a prized gift suggestion: Liquor always seems to bring applause!

What’s the Christmas gift exchange like? Here’s what happened in 2015. 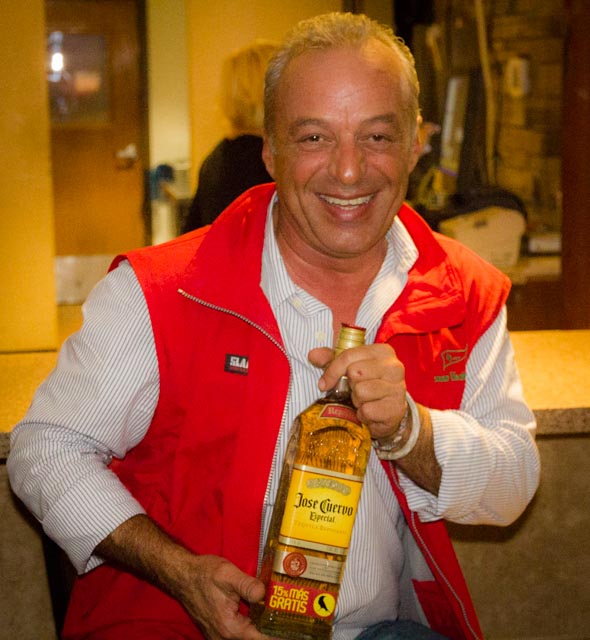 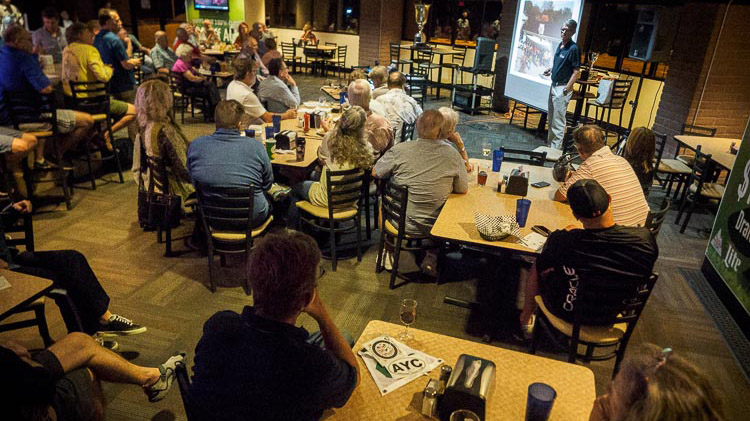 It all started with the legendary J/24.

Jeff Johnstone recounted to the AYC November monthly meeting how his father Rod chose the size of the J/24 40 years ago for one critical reason: he could build a 24 foot long by 7 foot wide boat in his garage. Anything bigger wouldn’t fit. When they rolled it out, it not only floated, but beat all comers with a family crew on board.

Since then, there have been over 14,000 boats with the famous J/ on the side, a record of success they could never have imagined back then. Jeff recalled the path from J/24 to J/121, the company’s latest offering, a 40-footer designed for comfortable ocean cruising and racing with a smaller-than-typical crew. Instead of six crew hiking, the J/121 has water ballast that Jeff says “you never have to feed.”

Jeff made a lightning fast trip to Arizona for the Tuesday night meeting, flying in Monday, working in his hotel room Tuesday morning, playing a round of golf at Rolling Hills in the afternoon and then taking the red-eye home in order to make it to a scheduled sailing session in Rhode Island Wednesday morning. AYC members showed their appreciation by filling the room at the Caddy Shack.

What kind of event brings out large numbers of boats? Jeff ran through the list of some of the most-attended regattas in the world, regattas that bring hundreds: the Fastnet, the Around-the-Island (the island of Wight), the Chicago-to-Mac, the Bridges race in San Francisco Bay and several others. How about a 600+ mile race in the Grenadines? Jeff says people buying the J/121 are looking for interesting races in interesting places and that doesn’t have to mean wet and cold! 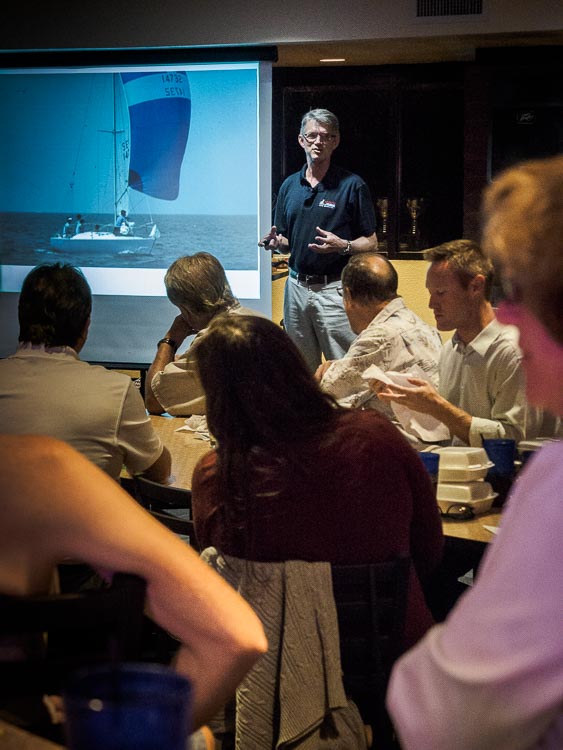 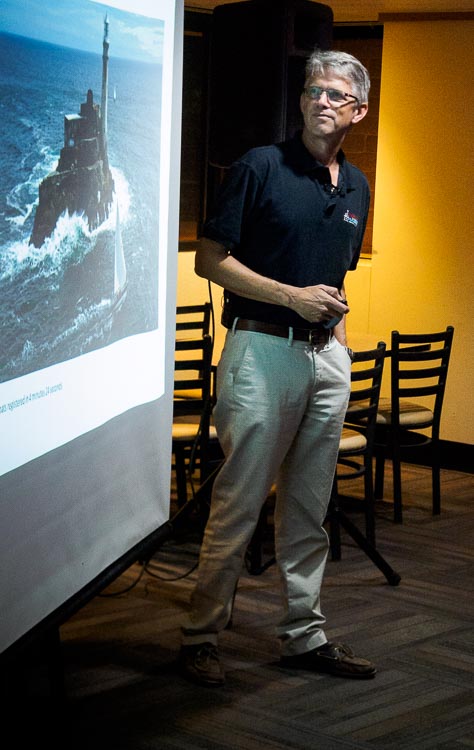 That’s the famous Fastnet rock, the rounding point of one of the most popular sailboat races in the world. Photo: Mike Ferring

Roosevelt Lake’s Salome Cove at day’s end. I loved the idyllic single sailboat anchored in the background for the evening. They had the entire cove to themselves. So peaceful. Photo By: Eric Heaton

Now that we have a new and reliable motor on the back of the club’s Boston Whaler, the board has decided it’s time to sell the old safety boat, the Commodore’s Yield, and they’d like to offer it first to club members.

The lean description is that it’s a 2001 18-foot Alumacraft with a 90 horsepower Johnson outboard and a Yacht Club brand trailer. The boat is in serviceable but not pretty condition and will be priced accordingly. It’s currently being stored at Lake Pleasant. Contact Fleet Captain George Sheller if you’re interested.

Here’s a link to the current version of the boat. 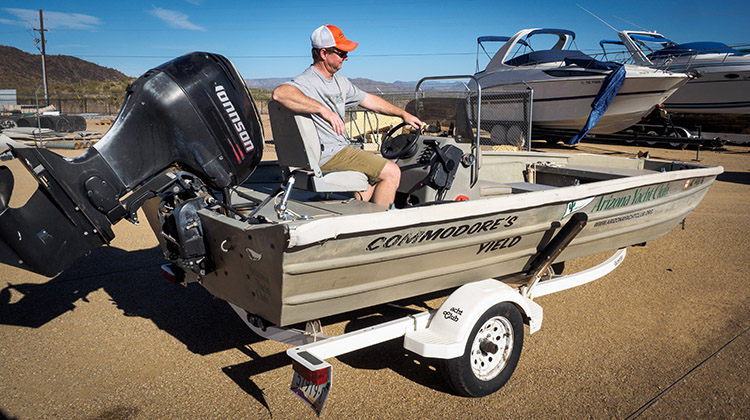 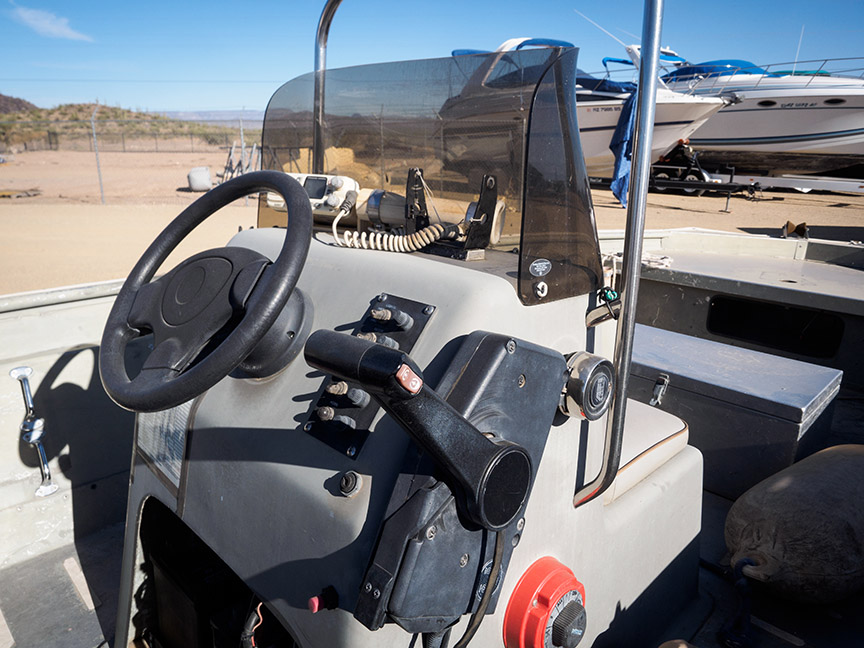 The console of the Commodore’s Yield 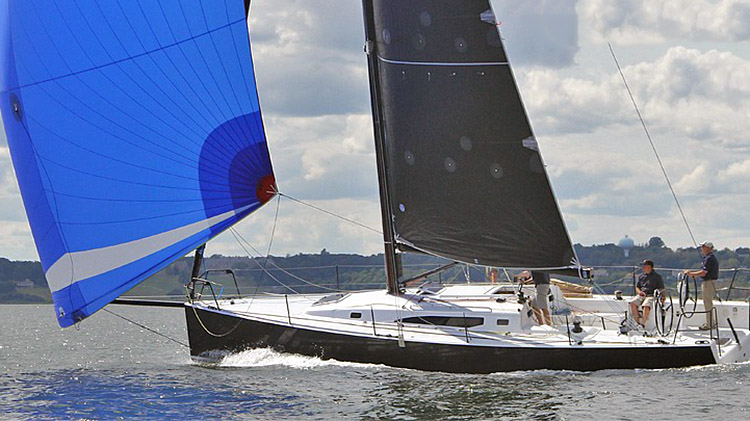 Every performance sailor knows J/Boats, the premier company for fleets of fast boats that began with the legendary J/24 and continues today with a host of sailboats that start with the letter “J.” 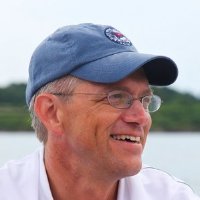 On Tuesday, November 14, the president of J/Boats, Jeff Johnstone, will be our meeting speaker. He’ll trace the path of the company from the groundbreaking J/24 to the latest hull #1 of the new J/121 (which I know you’ll want to order immediately).

It was Jeff’s father Rod who started it all with $400 worth of fiberglass and wood plus some leftover rigging from brother Bob’s Soling. The result was Ragtime, which proved an amazing race winner and launched a series of J/24s that eventually sold an astonishing 5400 boats.

Since that beginning, the brand has produced 7,000 more J/Boats. A total of six of Rod and Bob’s sons keep the company in the family and sailing fast.

The meeting is Tuesday, November 14, beginning at 7pm (but arrive early for dinner). Monthly meetings are held at the Caddy Shack @ Rolling Hills Golf Course, 1415 North Mill Avenue, Tempe, AZ 85281-1205 (map) and both members and non-members are welcome to attend. 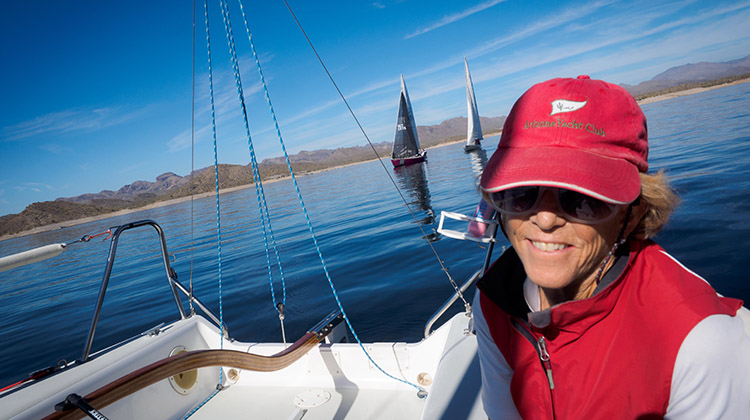 Ellen Wesley is the 2017 Ruth Beals Cup champ, taking the overall honors at Lake Pleasant Saturday, November 11. Ellen sailed on one of Victor Felice’s J/24s and led much of the race, falling behind in light air rounding Balance Rock and then making it up with a bold move along the western shore when the wind died entirely. Counting on a whisper of thermal air movement, they ghosted up the shore and to a shortened course finish at “no name” island.

The scores for the 2017 Ruth Beals Cup are posted on the results page, or click here.

Maryellen Ferring finished second in her J/80 and Ryane Griffis was third in an Etchells. Eight boats were set to start the race, but Debbie Barlow’s Siren 17 lost a main halyard on the way to the race course and didn’t start.

We thank Fleet Captain George Sheller and Mark Howell for their work as the volunteer race committee. For speedy race results, they texted the finish times to scorekeeper Dave Christensen, who posted the results right after the finish. 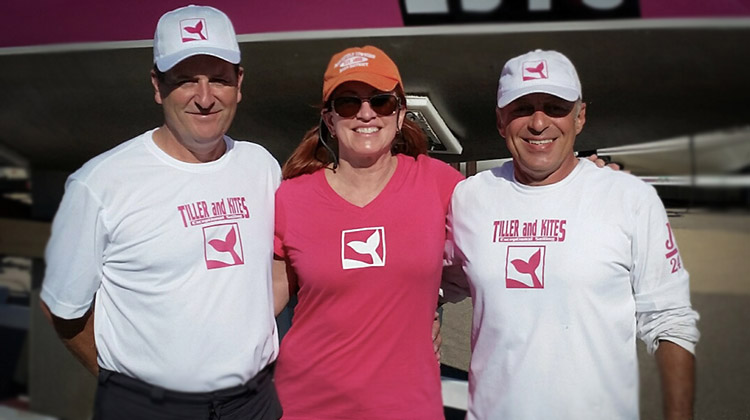 Ellen Wesley won the Ruth Beals Cup despite the two characters flanking her. 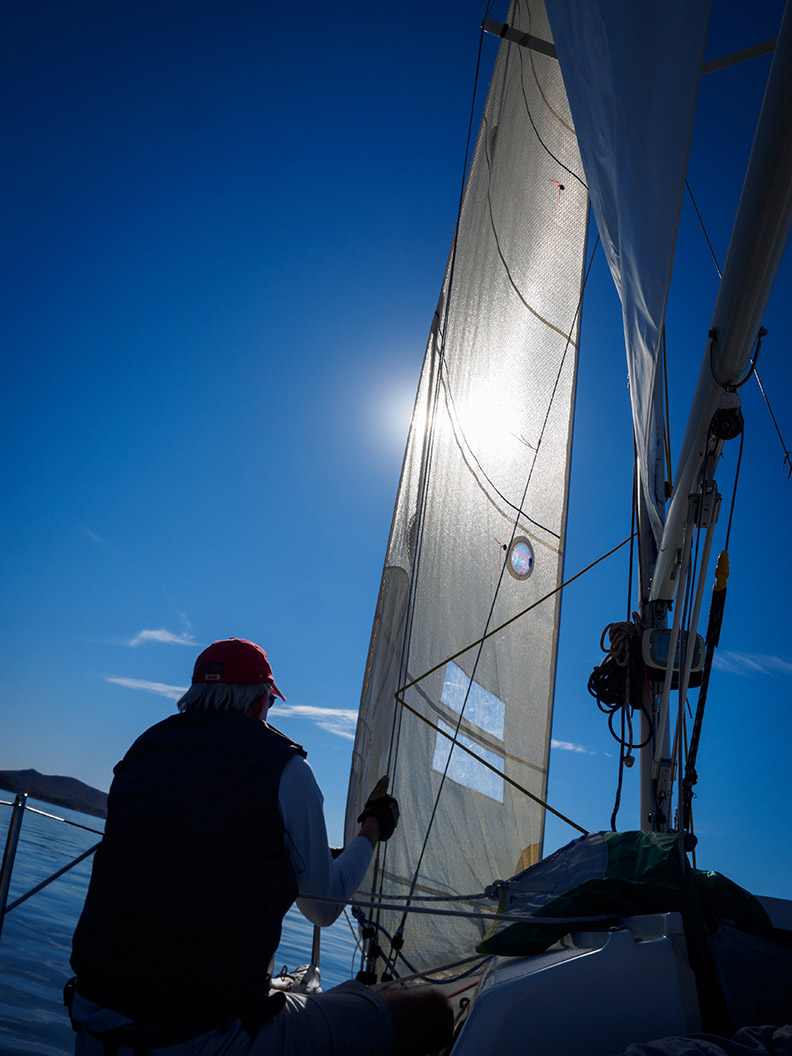 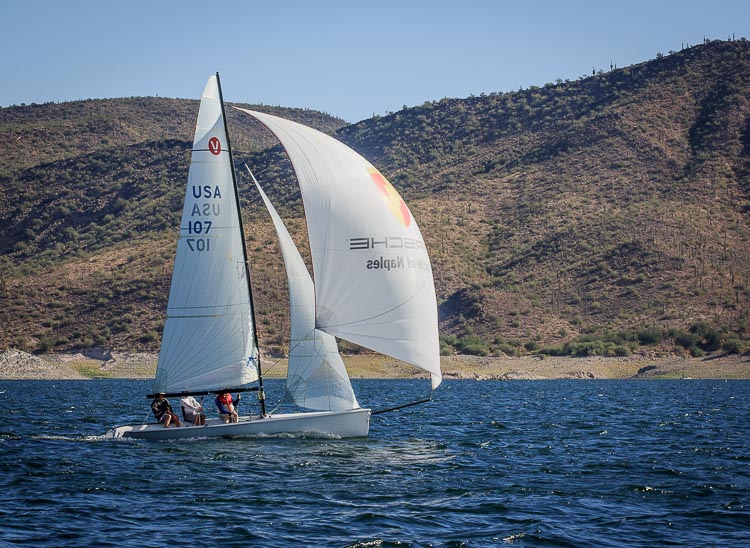 Week 4 of Racing at Lake Pleasant

Score one for Perfect. Saturday (11/4) was as close to perfect as sailing gets: breezy, generally unshifty, and comfortable temps. I hope you were there. Sunday started out as one of those drifter things, with lots of boats timing out on a first race. Then, as some boats were about to give up, the wind came up from the south and it was game on. This time it was puffy and shifty, but we’ll take that over no wind any Sunday of the week.

The scores for week 4 of racing at Lake Pleasant are posed on the results page, or by clicking here. 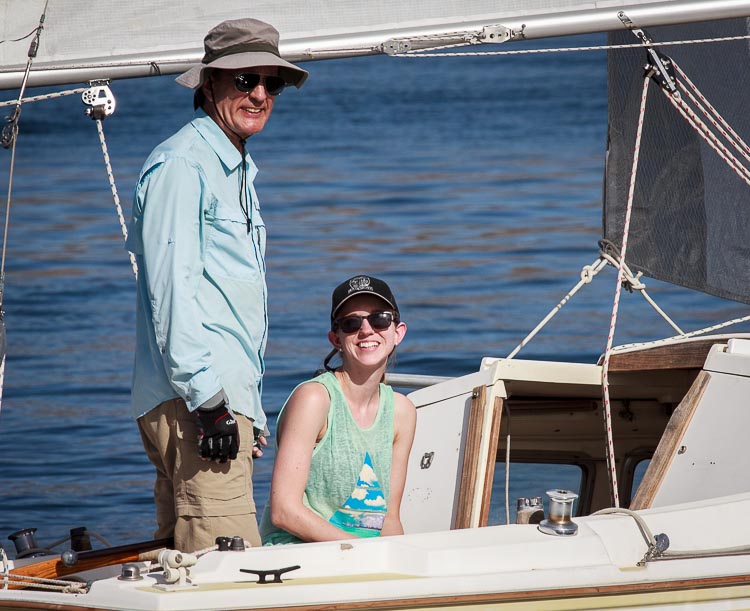 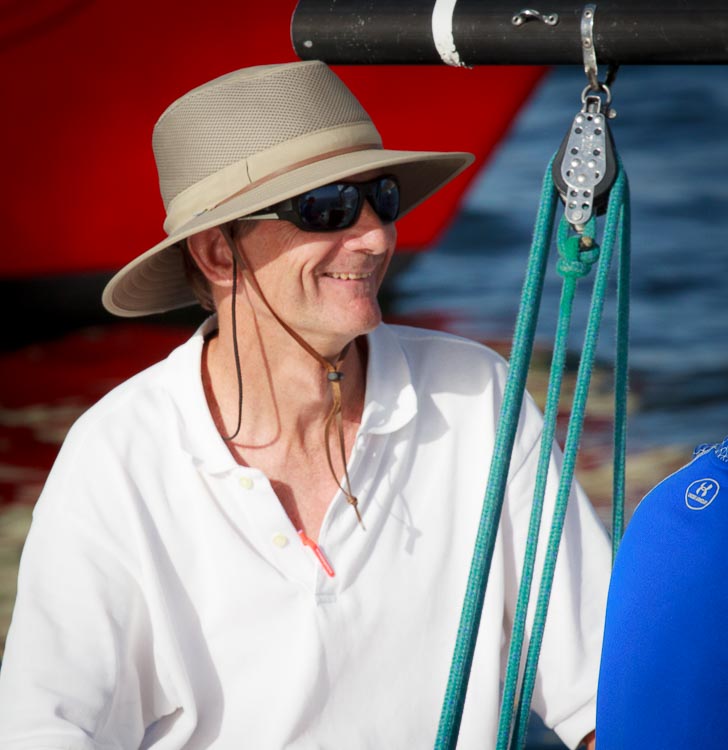 Another Light Air Sunday on TTL

South wind wasping through the buildings on the south shore of the lake made it another light air weekend. Our respect for the sailors who had the patience to continue to “race.” 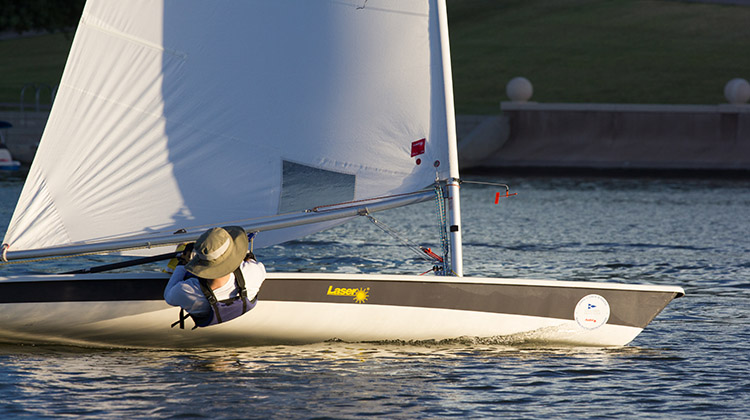