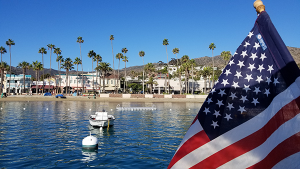 Last weekend AYC Sponsored a Flotilla to Catalina Island, and what a great time it was! The sailing between Long Beach and Catalina was some of the best wind I’ve ever had both ways. On our way out the we had the sails up as we rounded the Carnival Cruise Ship Terminal and sailed out of the Long Beach Harbor entrance. On our boat we had 5 kids and 3 adults. We sailed until we dropped to 4kts and saw that mooring balls were becoming scarce. We motor-sailed the rest of the way.

We spent the first night (Friday) in Descanto Bay, just north of Avalon and open to the ocean. We caught up with our flotilla members Jim and Marilyn Nelson on their Hylas 46 Liberte. We had dinner ashore at Charlie’s Steak and Seafood which was amazing fresh caught fish! Being in Descanto Bay, the dinghy ride was about 10+ minutes one way and it was moderately rough night out in the open ocean, but being outside in the sun all day, sleep was found pretty easily by all! 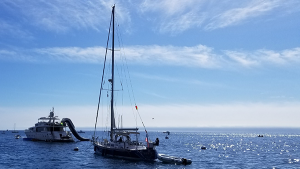 The next day (Saturday) we cooked breakfast on the boat and planned our day ashore at the beach. Liberte chose to head up to Isthmus Cove at Two Harbors so we bed them a fond farewell. We dinghied into Avalon and got set up on the beach. The kids swam and played in the water and on this massive inflatable fun platform Avalon has set up there. At about 10am we got invited by the Avalon Harbor department to move into Avalon Harbor so My daughter and went over and moved the boat to its new mooring. Later, we had dinner at the Catalina Cantina. Now that we were in Avalon Harbor, the water was much calmer and we had a better evening’s rest. 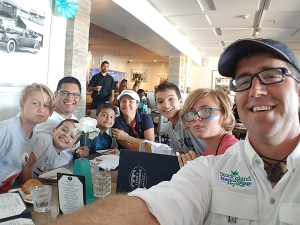 The next morning, we cooked breakfast on the boat and made one last trip to shore for ice. We left Avalon, right at 9am, which is checkout time, and motored out of Avalon for about an hour. The wind came up early and we set sail. The USCG was broadcasting a Small Craft Advisory for 3pm with winds 20-30 MPH. We reefed when we started to see 7kts of Speed over Ground and then saw 7kts again under reef within about a half mile of LA Light (AKA Angle’s Gate).

Next year we are planning to arrange this in conjunction with the Tuscon Sailing Club who’s trip was the week before! Maybe even expand it by a day to catch a night in Two Harbors!