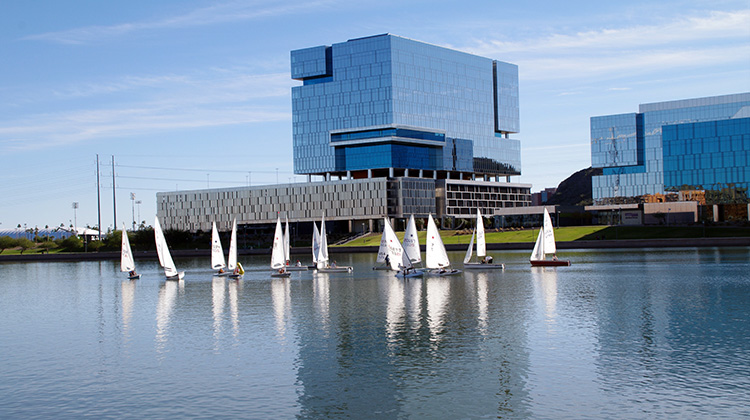 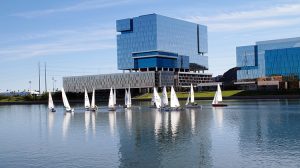 A light wind shot for the final day of the TTL fall series 2018. Photo: Sarah Sheller

And it finished with a mixture of wind and some very close racing.

Here are the results of the final week and the fall series.

Scott Sharples edged out Joel Hurley by one point to win the closely-fought Laser fleet. The Laser fleet was stronger than ever this fall, with some 19 boats registered and perhaps a dozen racing each Sunday, bringing contests up and down the entry list. Paul Miachika finished third. 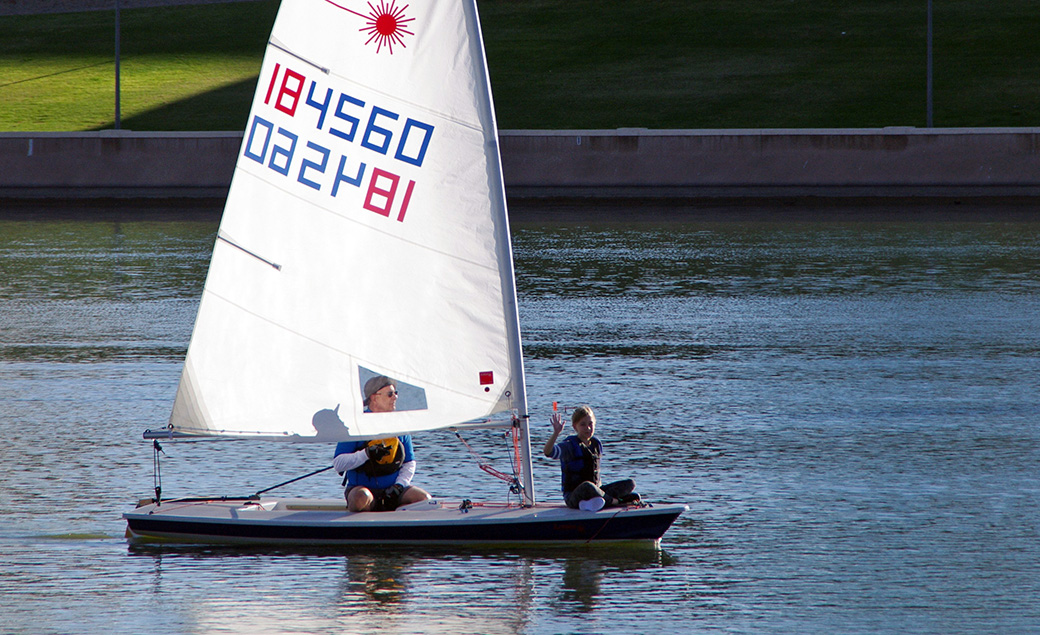 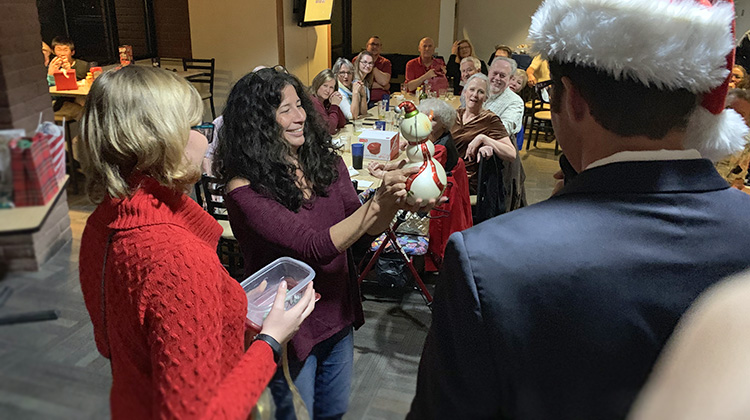 A big, festive crowd turned out for the December AYC Christmas/Holiday party (12/11), with over 50 gifts tossed into the Buccaneer Gift Exchange. Commodore Santa Rob Gibbs presided over the madness, and as usual, the favorite gift of choice was a bottle of something containing alcohol. 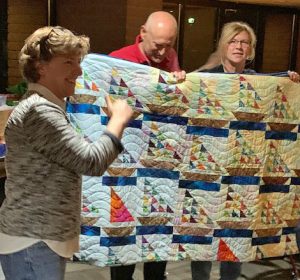 Since we’re getting a jump on the Birthday Regatta & Leukemia Cup auction, Maryellen Ferring auctioned off a handmade quilt created by Cindy Pillote’s mother, with the proceeds going to the Leukemia & Lymphoma Society. Debbra and Emory Heisler were the high bidders at $1,000. People also bought a couple dozen Birthday Regatta souvenir technical shirts and various other silent auction items.

Rob also presented the giant Governor’s Cup trophy to Joel Hurley and crew Grant Younger and quickly declared Ye Blunder Bucket voting over by choosing George Tingom as the winner for not showing up or returning the Bucket for this round of voting. Remember your other Blunder nominations for the next round at the Commodore’s Celebration in May. 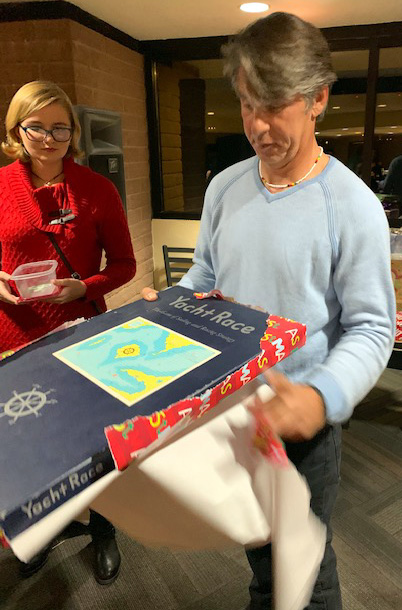 Tony Chapman opens a gift of a racing board game. Tony didn’t keep it long since it was quickly “pirated.” Photo: Mike Ferring 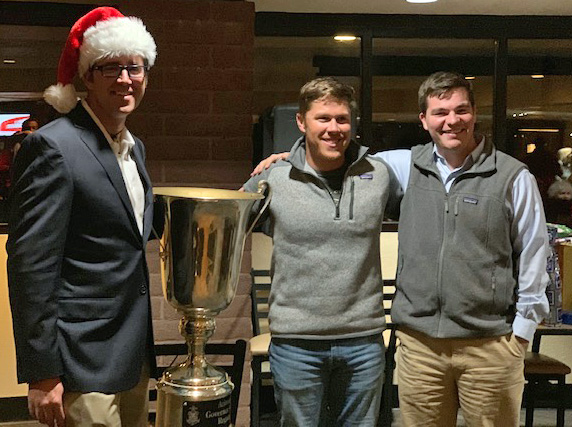 Angela Hutchinson reveals one of the more than 50 gifts of the night. Photo: Mike Ferring 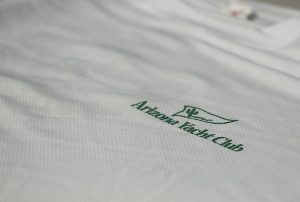 The 2019 Birthday Regatta and Leukemia Cup shirt front with the AYC logo.

When you sign up for the February 8-10 Birthday Regatta & Leukemia Cup, be sure to outfit the crew in souvenir technical shirts. In fact, you don’t have to wait until you sign up (since we know that’ll be at the last minute). We’ll have the shirts available at the Christmas gift exchange on Tuesday night (12/11).

The graphic on the back of the shirt was drawn by Bob Downer, a cleat hitch around that Arizona landmark, the saguaro cactus. The shirt itself is a comfortable wicking technical shirt that usually sells for much more than the $20 you’ll spend for this beauty. 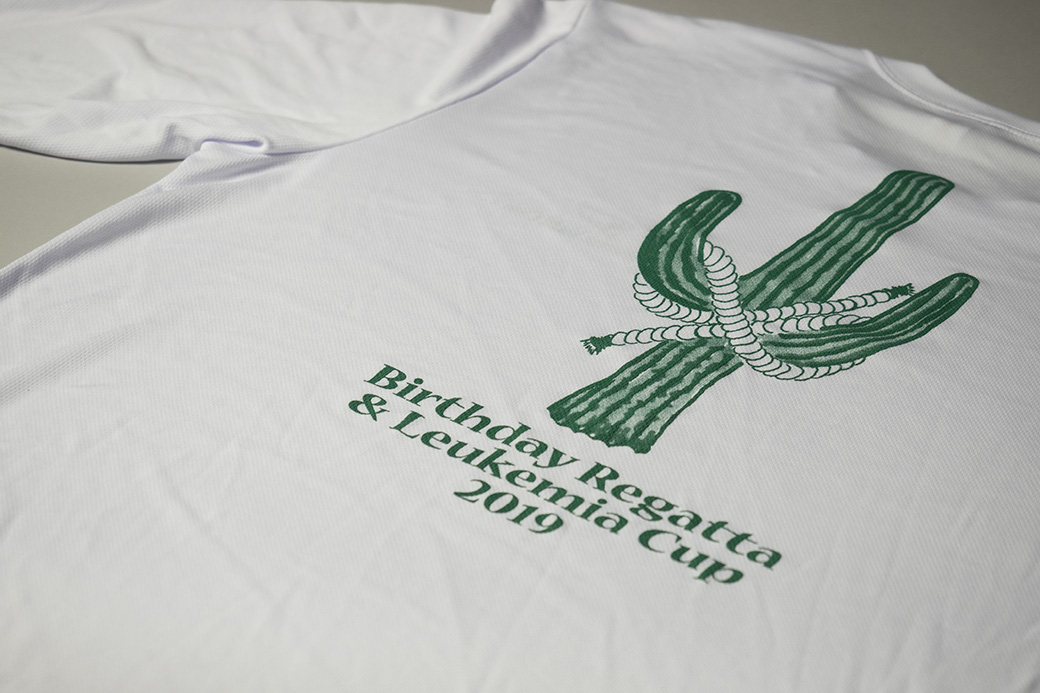 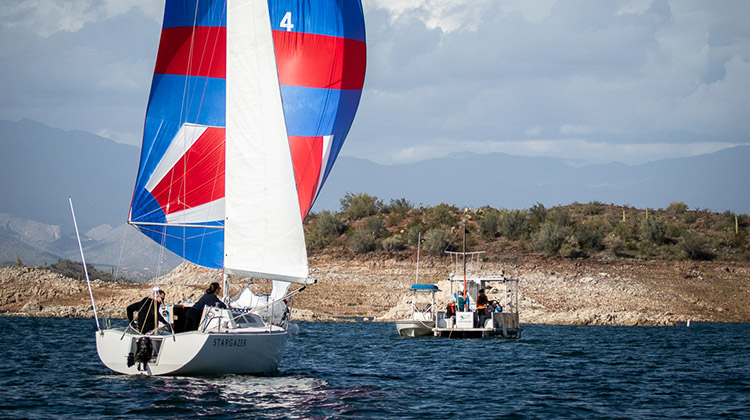 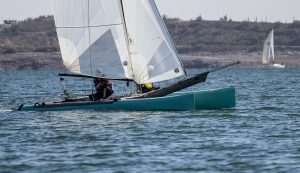 Some 35 boats were on the water for the 2018 Governor’s Cup, including a great turnout of mult-hulls. Photo: Mike Ferring

That crafty ol’ Lake Pleasant did what it likes to do on our long races: scramble the results. After a nice breeze sent boats on a good run upwind to Horse Island on the first leg of the 2018 Governor’s Cup, the lake went into its shifty thing, going dead, then patchy from the south.

Some 35 boats were on the start line on a beautiful, cool Saturday morning (12/1), ready to try to take home the huge Governor’s Cup trophy or at least have a good time trying.

When the boats arrived at Horse Island, an interesting thing happened. For this race, PRO Wendy Larsen had decided to set inflated marks on the north side of Horse and Balance Rock and use them as rounding marks. While most of the competitors read this to mean that you rounded the islands and the marks, that smarty pants Mike Hester read it to mean you were free to round only the marks—and instead of taking the slow route around the leeward side of Horse, Mike stayed on the breezy side. Game, set, match.

Joel Hurley said, “I’m just following Hester” and took the quick road too—and others followed, either because they’d figured it out on their own or decided to follow the leader. A close reading of the race documents backed up Mike and the rest of the smarty pack. Joel’s Santana 20 finished the race just four minutes behind Mike’s Viper and once the huge handicap difference was applied, Joel had won.

Special credit goes to the next finishers: second place Dick Krebill in his Capri 14.2 Tomato Sloop and a corrected two seconds later, Bob Worrall in the C22 Spirit!

The results of the Governor’s Cup are posted on the results page, or click here. 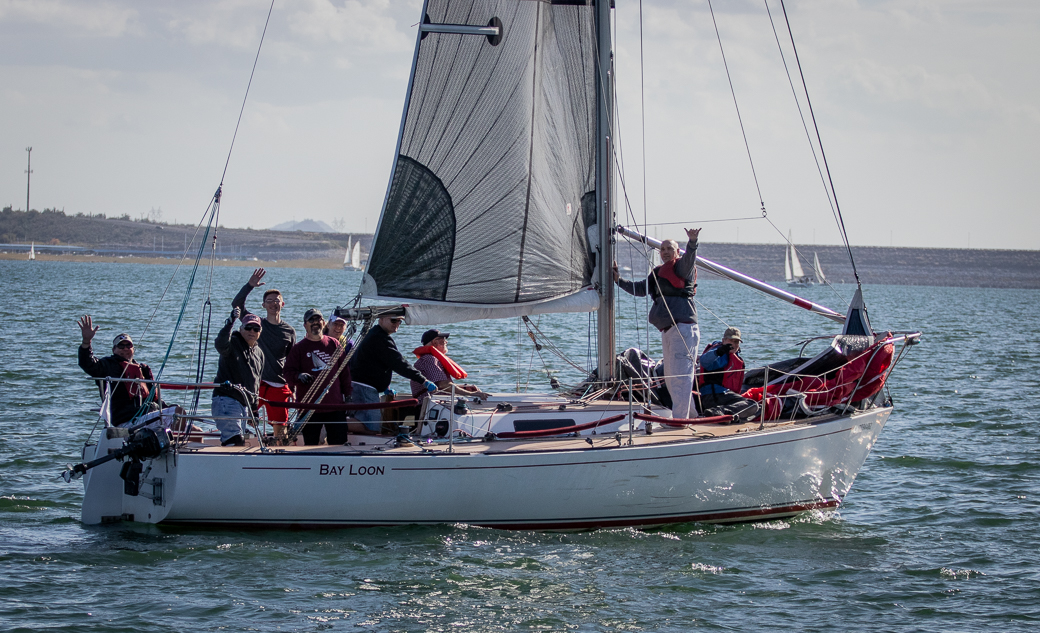 Now this is the spirit of the Governor’s Cup: party time! Photo: Mike Ferring