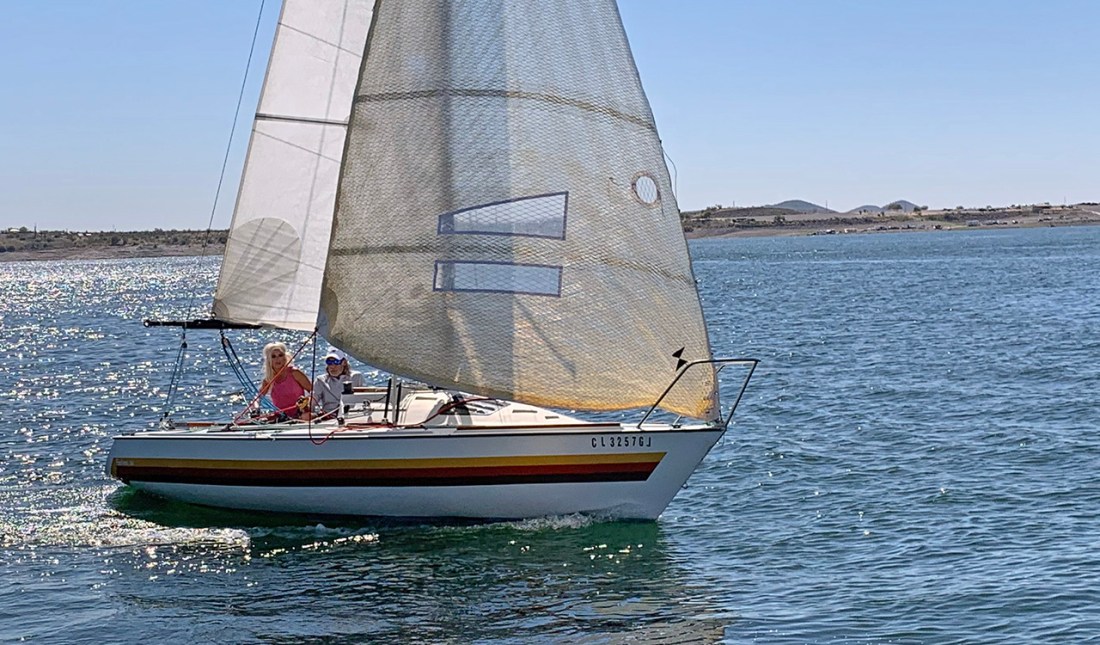 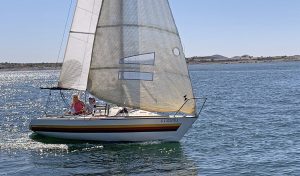 On a breathtakingly beautiful fall day at Lake Pleasant, a group of eight highly competitive women would have made our AYC founder proud. The Ruth Beals Cup is a regatta that mandates a woman at the helm of every boat and is considered by most as the Woman’s Club Championship. The skies were clear, and the wind gods were smiling, giving the ladies a perfect sailing breeze out of the north at 7 to 10 knots before the start. We had boats of all types and sizes registered ranging from the “sporty” J/70 and Melges 24 to the more “sophisticated” Impulse 26, Santana 20, Olson 25, Catalina 25, Merit 25, and a B-25.

The warning gun went off precisely at 9:30am as the women started into their pre-start routines and strategizing. As the time ran down, we could see a very competitive start emerging. During the last 10 seconds before the start we heard several “very direct conversations” (we don’t yell on a sailboat) between various boats to try to gain an advantage. Although, if I wasn’t mistaken, those were all male voices I heard, while I noticed that the women remained very calm at the helm of their boats. Anyway, the J/70, with Maryellen Ferring at the helm, and the Melges 24, with Stacy Loula steering took the early lead at the start. 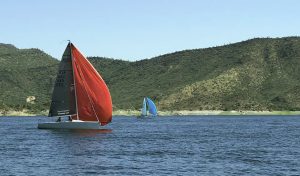 The speed difference between all the boats became very apparent about halfway up the first leg as the ladies had their sights on Horse Island. The wind had diminished slightly to 5-6 knots as the Melges 24 and J/70 sprinted away from the fleet. But wait, this race has only begun, and everyone knew the real racing would begin while rounding the two northern islands.

As expected, the wind lightened considerably on the north side of the islands and the Impulse 26, with Elaine Charteris on the tiller, surged into the lead after navigating a most efficient path around Horse Island. This left the sporty boats wondering what happen as they had a good view of Elaine’s transom. While the J/70 and Melges 24 were struggling a bit navigating the treacherous island winds, the Santana 20, with Brooke Miller driving, slowly started to sneak up behind the leaders. As exciting as it was, the Melges 24 team regained their composure and with the help of a nice shaft of wind made the turn south in the lead. 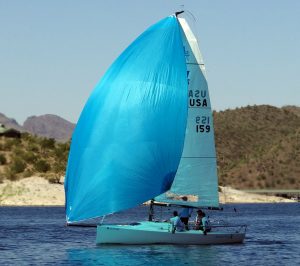 As you can imagine, the rescue boat was primed and positioned to catch the anticipated great pictures of all the boats popping their chutes while making the turn south to No Name (Bobcat) Island. You could feel the anticipation in the air, and we could tell that the J/70 team was itching to get their asymmetric flying after having some challenges on the east-west leg. And pop it did – I think I heard several oohs and ahhs as the J/70 introduced a bright turquoise front sail that seemed to generate a luminosity that encircled the boat as it climbed the mast and filled with air. Cameras were flashing from all angles as Maryellen proudly made her way through the left-hand turn.

Moments after that, the Melges 24 rounded the island and was in clear water as she jibed and her asymmetric went immediately into a prolonged hourglass. The turquoise sail was flying strong as the J/70 pushed her bow into the lead for the first time. Unfortunately, the J/70 got a little too close to the island and fell into a huge hole, giving the Melges, Impulse, and Santana some time to regroup. A couple more boats rounded the islands, not too far behind, which included the Olson 25, skippered by Lulu Baydoun, and the Catalina 25, with Pam Neff on the helm.

The downwind leg consisted of the “haves” and “have nots.” The boats that took the eastern-center course were the haves and the western shore boats were the have-nots. The J/70 and the Santana 20 took the eastern option while the Impulse 26 and the Melges 24 decided to go west. East was right and west was wrong. The J/70 made a brilliant move eastwardly and rolled the Melges 24 that was literally appearing to be standing still along the western shoreline. Commentary after the race, with the eventual winner, suggested that the Santana 20 chose the eastern route after Brooke recalled a previous conversation with Maryellen that said, “when the wind diminishes go east my lady.” That turned out to be most valuable information.

The boats finally made it to the yellow mark in front of Bobcat Island with the J/70 with a big lead, followed by the Melges 24, Santana 20 and the Impulse 26. At this point the south breeze was starting to fill in, but it was still fighting with the morning northerly. The J/70 did well coming up to the finish until she was about 300 yards away and the wind died. This allowed the three boats coming up from the south mark to make some time gains as the prevailing south breeze started to take hold.

All and all it was a fantastic day on the lake and we were all impressed and proud of the all the fine women skippers. All the boats finished, and it seemed like everyone had a great day. I would like to give a special shout out to the Merit 25, with Ellie Carrol on the tiller with her the kids as crew and to the B-25, with Elizabeth Allard at the helm. They really made the race committee’s day when they cheered loudly as they crossed the finish line to close out the regatta.

Unfortunately, the 2018 Ruth Beals Cup winner, Cindy Pillote, could not attend this year due to an injury so we were guaranteed a new champion. A big congratulations to the 2019 Ruth Beals Cup winner, Brooke Miller with crew Jeff Coulter (driving my boat… Woohoo!). Maryellen Ferring came in second for the second year in a row and sailed a great race. Rounding out the top three was Elaine Charteris in third place.

Editor’s Note: Big thanks to the race committee of Scott Richards, Skip Kempff and Greg Woodcock. 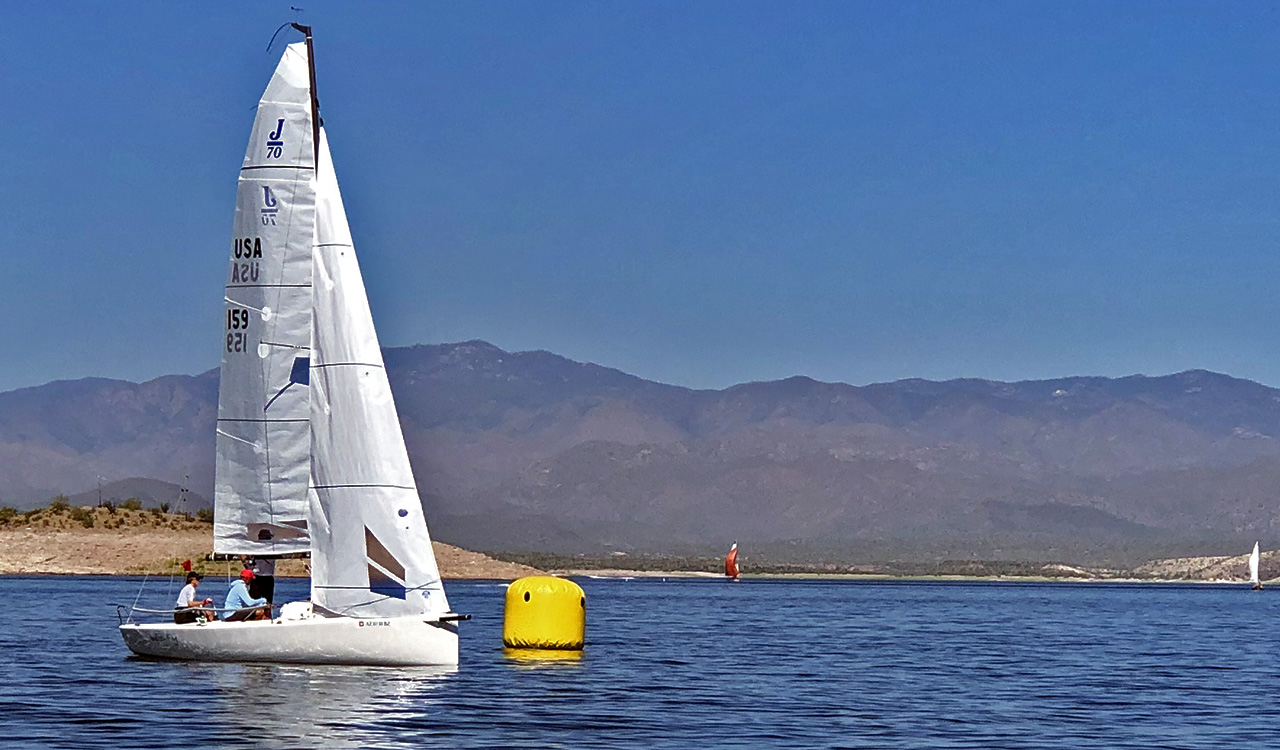 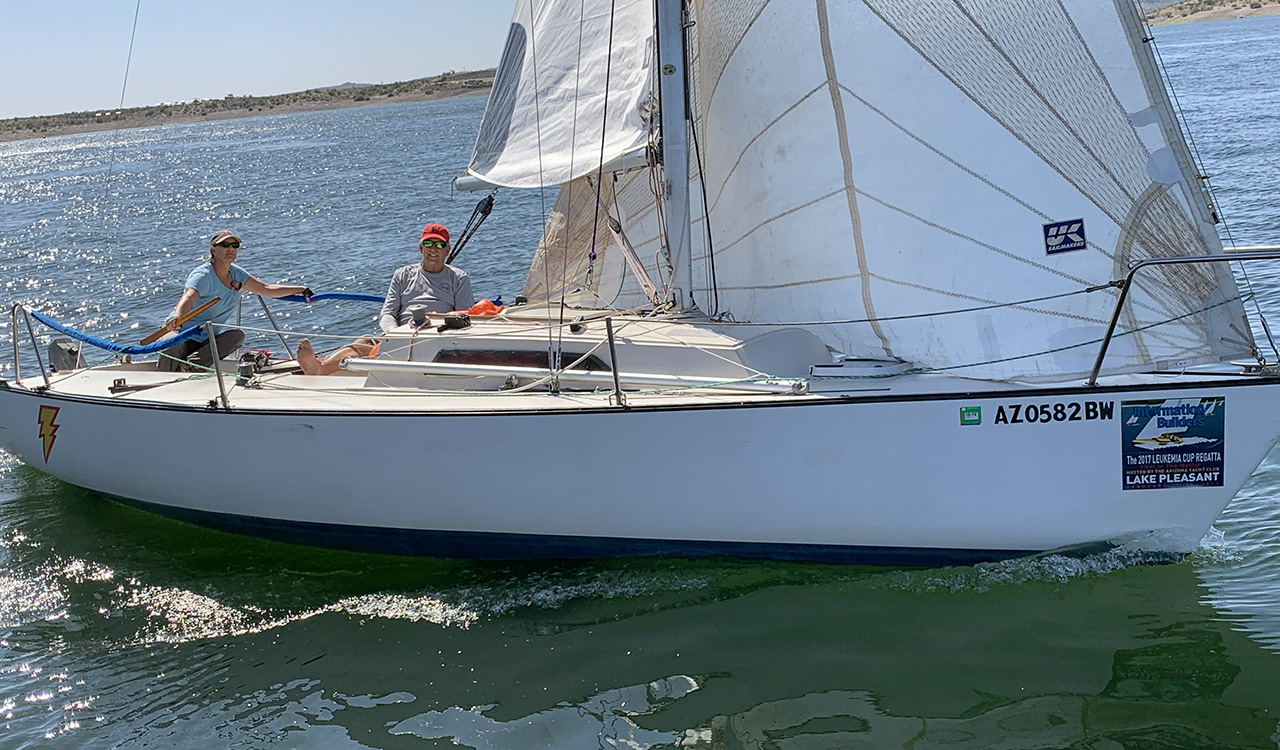 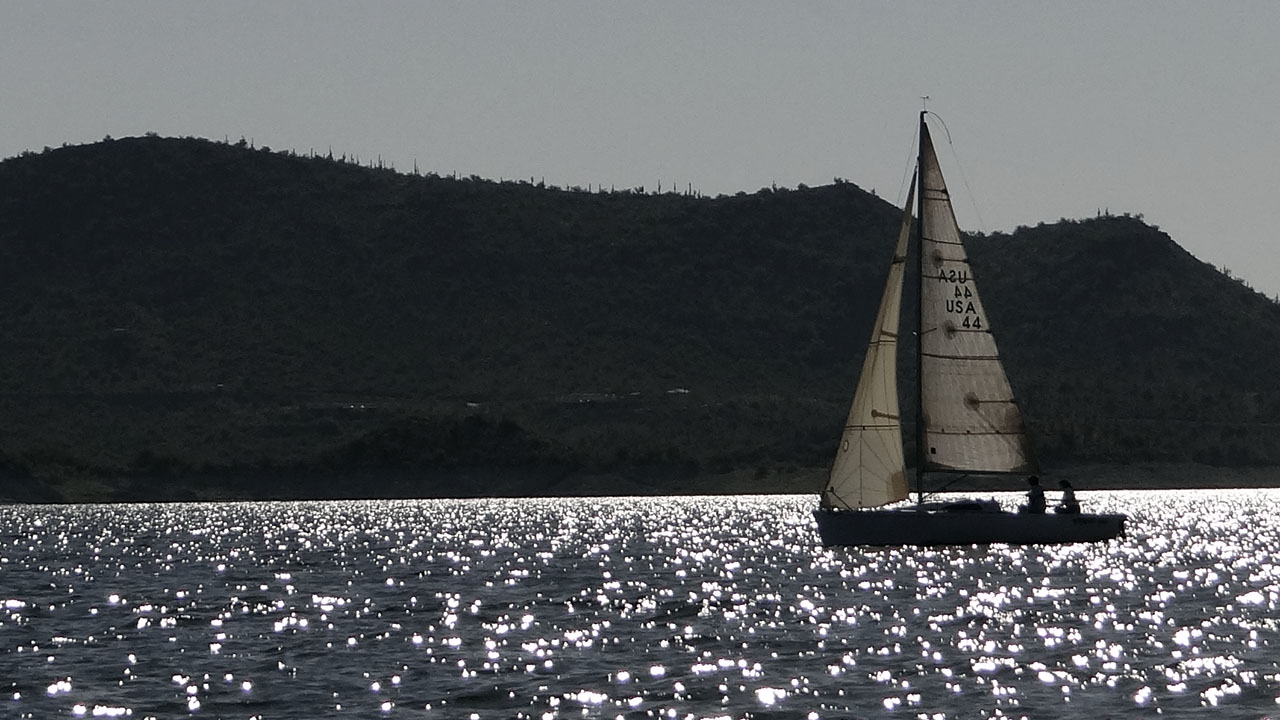 Elizabeth Allard at the helm of the B-25, sparkling on Lake Pleasant. Photo: Skip Kempff 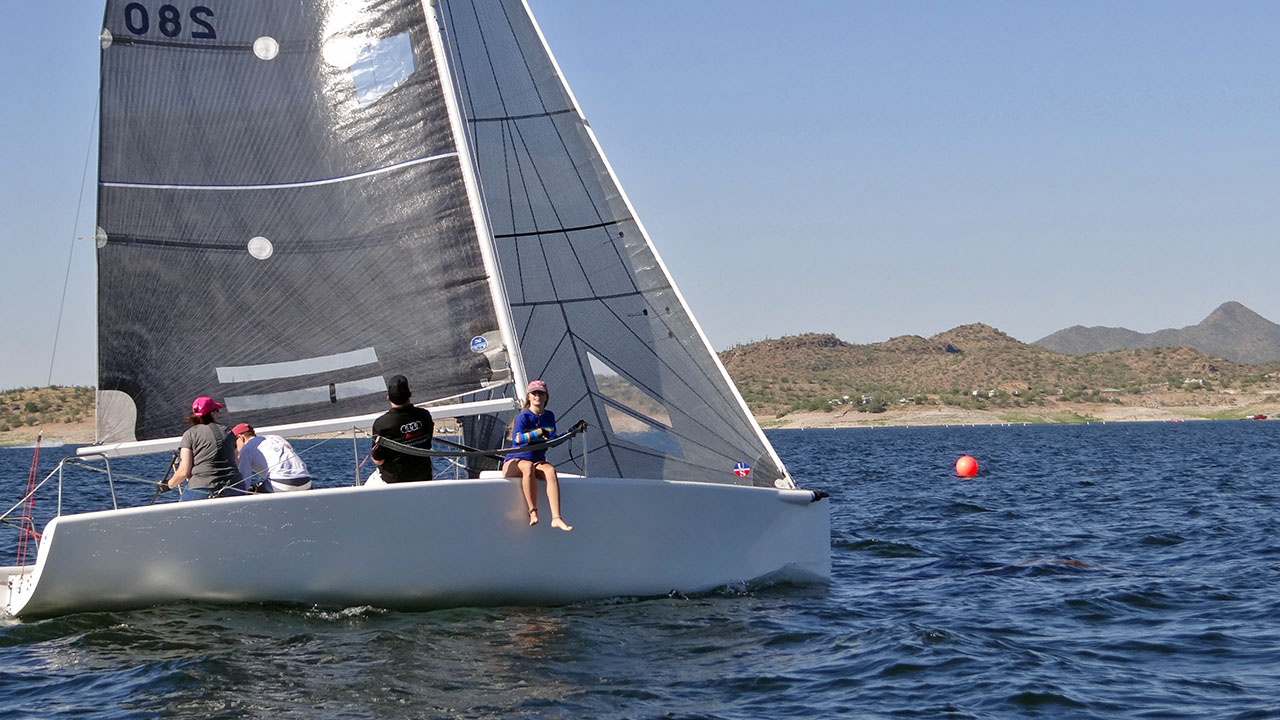 Stacey Loula and the Melges 24 team at the start. Photo: Skip Kempff