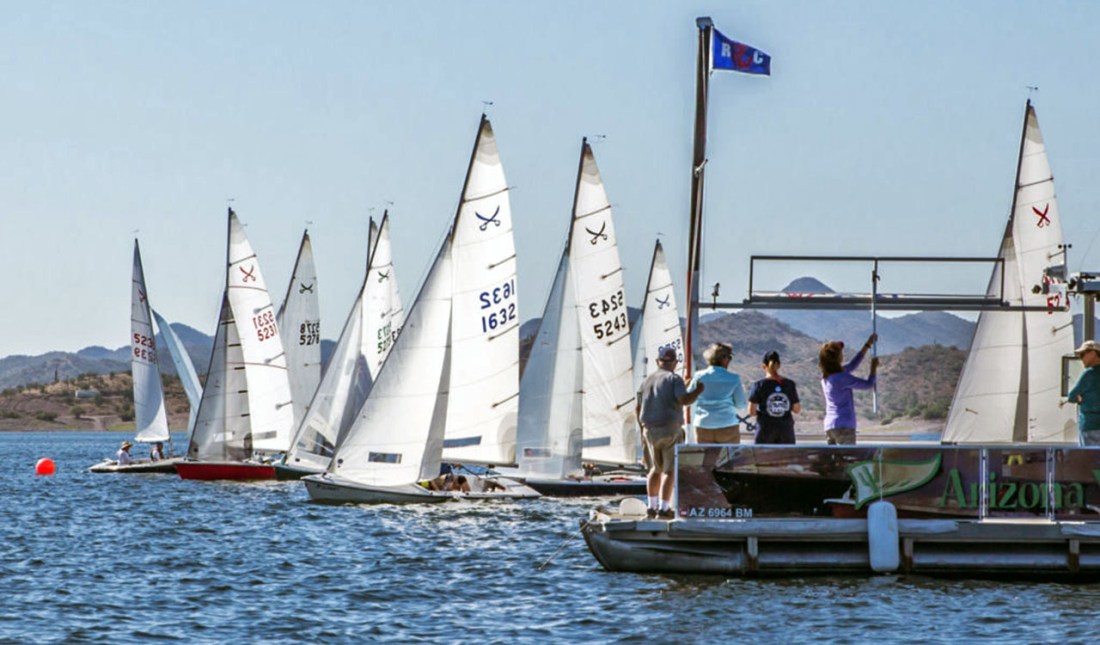 Buccaneer 18 Championship Had It All! 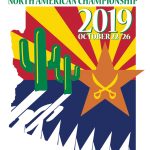 From high winds to no wind, from recycling to composting, and from DC to Alaska, the 2019 running of the Buccaneer North American Championship had it all! The regatta was held at Lake Pleasant, Arizona from 22-26 October. We had teams from Maryland, Virginia, Illinois, South Carolina, North Carolina, Alaska and of course the home teams from Arizona. The food was magnificent, the camaraderie was jovial, and the competition fierce!

Regattas don’t happen without a lot of effort and volunteers. All of the competitors gave much thanks to the Race Committee that consisted of PRO Wendy Larsen, Scorer Dave Christensen, Mark Boat Driver Mike Grijalva, Committee Members Jo Grijalva, Dale Buccanan, Chuck Landis, Bob Naylor, and Lori Reger. We also had Shore Crew! Deb Heisler helped organize the on-site food, which was a homemade TACO EXTRAVAGANZA on Wednesday night, and catered-in Mexican food on Friday night, as well as continental breakfast every morning and a sandwich and snack line.

Green Team Leader Deb Heisler and all the “Landfill Trash” that we produced in five days!

This event met all the criteria set by Sailors for the Sea to qualify for the Silver Level Clean Regatta Certification. This is no small feat. There were 13 Best Practices that we chose to comply with, some easy like giving out practical gear as regatta trophies. Others were more difficult, like composting and doing “paperless” regatta management. We owe a deep debt of gratitude to Rear Commodore Deb Heisler for her efforts to earn this certification.

The Tuesday practice afternoon was fluky even by Lake Pleasant standards, with the wind shifting from south to west from the 10 Lane Boat Ramp. Mostly, the practice day is just to make sure you put the boat together correctly and shake out the cobwebs a bit, so everyone had fun with it.

Wednesday morning race day came and it was all game faces. The Skipper’s Meeting came with just a few questions, and then it was go time. Four races, all in pretty good breeze, came and went, and a trend in the scores began to appear, but the real story was the forecast for Thursday.

With no wind forecast less than 20kts all day and gusts into the 40s forecast for Thursday, it was an easy, however disappointing, decision to cancel for the day. Several out-of-town groups found their way to local breweries as everyone sought shelter from the relentless wind. That night gusts were recorded over 50kts, which made Friday a tenuous decision for the Regatta Management Team. With racing set to start at 9, sustained winds in the high teens and gusts in the low 20’s, with 4 foot, wind-driven waves demanded yet another postponement.

Racing was then set to start at 10, and while the forecast had wind dissipating, those who jumped out on the water found out very quickly that mother nature had not been informed of the forecast. Now on the water, postponement with more signals ashore was decided as people took shelter at the north and south ramps and the Pleasant Harbor courtesy docks. Finally, at 11:30, after taking multiple readings on the water and reviewing several more forecasts, racing would start at 12:30.

The wind did dissipate some and the wind driven waves were in the 1-2 foot range by 12:30. The first race of the day tested skippers and crew as it was at the top end of the range for racing the Bucc 18. Everyone stayed upright and we got four solid races in as the wind continued to relent into the afternoon and overnight.

Saturday was the final day, and it started early with good breeze, but it wouldn’t be Lake Pleasant without a bit of a drifter, and the third and final race of the day ended on just that. A course that was shortened at the south mark.

The Bucc Fleet has a strong history of honoring not only the winning skipper, but also the crew. On a two-person boat, the skipper and crew relationship is very important and can make or break the team. In fact, some of the owners were actually crewing their boats. The Bucc 18 Fleet Champion Trophy has both skipper and crew listed on it. In honor of one of Arizona Yacht Club’s winningest Bucc crew and one of the best sailors, either at the helm or as crew, that I’ve ever known. The Bucc 18 fleet commissioned the Crew Trophy in Honor of Dennis Martinelli. Finally, the B-Fleet trophy was created in order to encourage sailors to come out and improve their skills. But once you’ve won it, you are banished from the B’s! For all the scores, you can visit the scores page here.

Additionally, we have some other awards: The Centurion award goes to the highest-finishing boat with a combined crew age over 100, which went to Dave Spira and Vanessa Wisbaum. The Oldest Boat award went to Jim Irwin for his early copy of the now revered Nickels Bucc. And the Sportsmanship award went to AYC’s own Dave Newland. His was the only boat to have a failure, which caused him to be the only capsize. It happened on Thursday morning, right after the second postponement. He didn’t let that bother him, though. He went in, fixed the boat, toweled off, and he and his crew Matt Baker got right back after it.

Thanks to Chuck Landis, Deb Heisler, Dave Spira, and Wendy Larsen for the photo gallery!