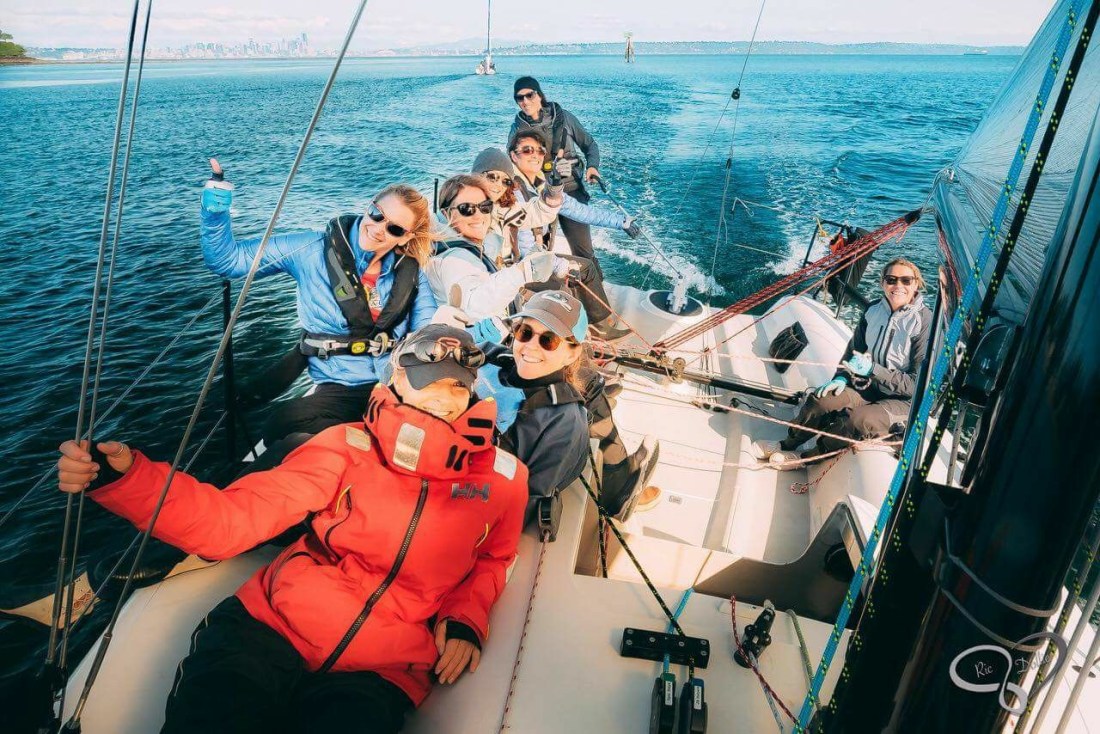 Eight women, a 32-foot Melges, good manners, humor and determination were the mix that led the Sail Like a Girl team to victory in the 2018 Race to Alaska (R2AK). Co-Skipper Haley King Lhamon was part of this history-making, all-woman crew and is joining us at the November AYC monthly meeting.

Here’s a nice video profile from Cruising Club of America.

The meeting is Tuesday, November 12, at Dave & Buster’s, Tempe Marketplace (map). It’s near Lucille’s, Smokehouse. Please arrive early for dinner as our program begins at 7:00 pm. Guests are welcome.

The R2AK is a 750-mile boat race that must be completed with no motor and no outside support. Sixty percent of the teams finish. Each team has to navigate its way from Port Townsend, through the tides of the Inside Passage and finish in Ketchikan, Alaska. First place grabs the first-place prize of $10,000 nailed to a block of wood. Second place gets a set of steak knives.

With limited experience and a few novice sailors, the Sail Like a Girl team never imagined they would win this mettle-testing, endurance race, especially after colliding with a large log in the middle of the night. They just wanted to finish.

This is a race of extremes: cold water, squalls, currents that run up to 15 knots, and unyielding rain. The women’s Melges was outfitted with two stern-mounted “bikes” that turned propellers to move the boat when the wind died. And die, it did. The team ended up biking about half the time and finishing under pedal power.

Haley has been involved in racing since age eight. Listed among her other memorable races are co-skippering her J/35 Grace E on a nonstop, screaming broad reach to win Division II and the J/35 fleet in the 2002 Chicago-Mac Race and skippering a Snipe on the US team in the Western Hemisphere & Orient Championship in Uruguay in way too much wind, against Olympians.

Residing with her family on Bainbridge Island, Haley is past Commodore of the Port Madison Yacht Club. As the Sailing Coordinator at Bainbridge Island Parks & Recreation, she stays busy organizing classes and instructing. And as a volunteer, she coaches the Bainbridge Island High School Sailing Team and serves on the youth committee and board of The Sailing Foundation. Haley has a habit of saying yes because she doesn’t want to miss out on anything! I’m so glad she said yes to Arizona Yacht Club.

For a longer description of the race and biography of Haley, click here. 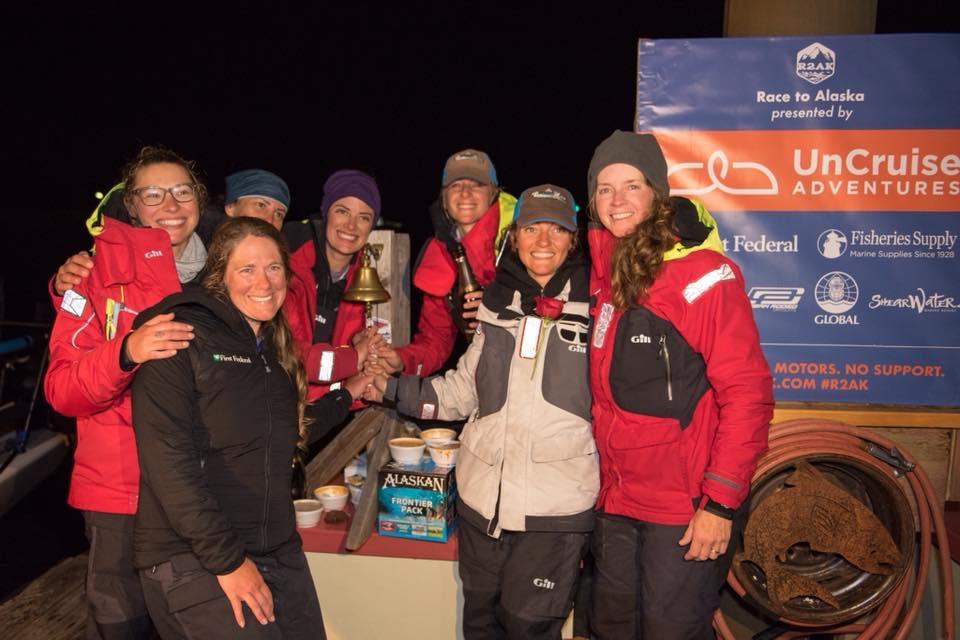 Sail Like a Girl Team at the finish bell. 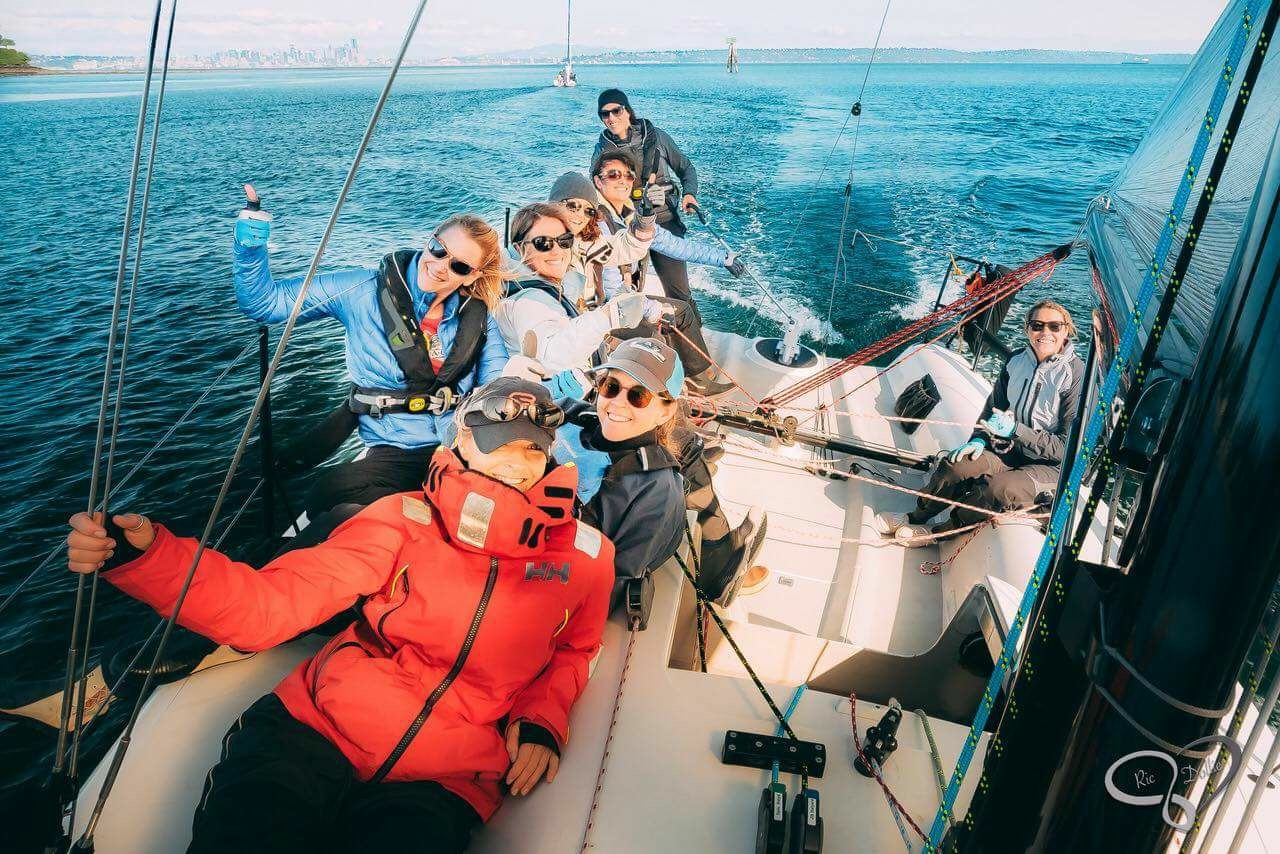 Sail Like a Girl team aboard their Melges 32 Photo by: Richard Horst