What We Do Throughout the Year

Unlike most Yacht Clubs, our season starts in September and runs through May. However, you’ll see us at Tempe Town Lake on Sunday afternoons during the summer for our Heat Stroke racing series or on Wednesday evenings for very informal beer can racing.  Our monthly meetings happen the second Tuesday at Rolling Hills Golf Course, and everyone is invited. Here is a typical series of events for our club roughly month by month:
September
Late September will bring about the start of our official racing season. We usually have a “tune up” or practice day one week prior to the first week of racing so people can dust off their boats (literally!) and we can check out the Race Committee gear. Tempe Town Lake Fall Racing usually starts in early September, but we still use the first Lake Pleasant Race day as our official “Opening Day.”

October – November
Racing continues alternate weekends at Lake Pleasant and Tempe Town Lake. Members keep close watch on the race scores as there are optimally 10 race days in the fall series. They also keep an eye out for gaffes made by their competitors for nominations for Ye Blunder Bucket! The Arizona Sailing Foundation usually starts its courses around the beginning of October as well.
December
Our membership meeting in December will typically award the Fall fleet winners, although it is not uncommon for the Tempe Town Lake series to continue well in to the month. We also usually do a Pirate Gift Exchange and award Ye Blunder Bucket to to a “deserving” individual. 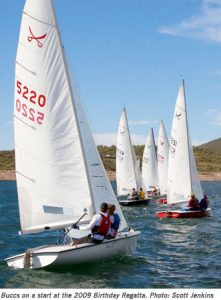 February
Our biggest event of the year is the annual Leukemia Cup & Birthday Regatta. In the past we’ve had over 100 entries to this event, which is now held in February.
January – April
At the end of January, we jump right back into fleet racing at Lake Pleasant and Tempe Town Lake. The Arizona Sailing Foundation begins a second round of sailing classes. As a diversion, some fleets will participate in the San Diego NOOD Regatta in March, usually around St. Patrick’s Day. The season ends at the end of April or the first weekend in May. Our point-to-point “Tall Cactus Regatta” is typically near the end of the month.

May
This is the month that we bring it all to a close. The winners of each fleet compete in a winner-take-all, one-design Club Championship Race to crown the year’s top sailor. We finish out the season with our Commodore’s Party where we give out Club Trophies and empanel a new Board of Directors.

June – August
It’s HOT in Arizona! We run fun series of Wednesday night beer can races at Tempe Town Lake (water guns highly encouraged). Many people head for cooler climates, but we do have a few things going on. Many club members participate in the “down the coast” races. We also have an annual family camping outing.