Our iconic little boats with the bright colorful sails (and also some white racing sails) are easily recognized by sailors the world over. Easy to sail with one or two people, easy to own, and easy to transport, their mass appeal is easily understandable.

The Sunfish first became available in 1951, either as a do-it-yourself kit or a complete boat, both constructed of marine plywood with a spruce mast supporting a lateen sail. Fiberglass production followed in 1959. By 1995, the Sunfish was inducted into the American Sailboat Hall of Fame. And now, after almost 70-years of production, over 300,000 Sunfish have been built and sailed worldwide. Simple, safe, fast, and fun, it’s easy to see why the timeless Sunfish is the most popular sailboat on the planet.

It’s easy to think of the Sunfish as a “beginner’s boat” – heck, just about every sailor learned on one. But Sunfish are attractive to both novice and experienced sailors alike. Comparatively stable and forgiving for its size and with just a single control line, the Sunfish will plane in a good wind, making for a fast, fun ride … and wet pants! Sailing legend Gary Jobson’s (then) young daughter famously called his Sunfish “the Fun fish” – a name that stuck. John and Jackie Kennedy enjoyed sailing one. And Paul McCartney and Bon Jovi have been known to sail a Sunfish too. Sunfish is the simple, easy, fun boat for everyone.

The AYC Sunfish Fleet welcomes boats of all vintages, as well as Sunfish predecessors – Alcort Minifish and Sailfish – and Sunfish clones (clonefish / frankenfish) of similar weight, design, and configuration. We enjoy friendly competitive racing as a means to get together and improve our skills. We also plan on group outings to other nearby lakes, and we hope to participate in regional Sunfish races and events. No boat? No problem! We may also have “loaner” boats available from time to time.

For information on the:

Come join us on Tempe Town Lake for “fun in the sun” … on a Sunfish! 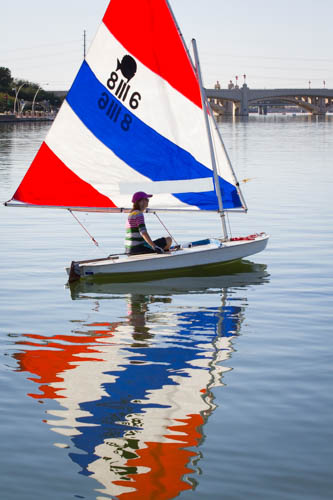