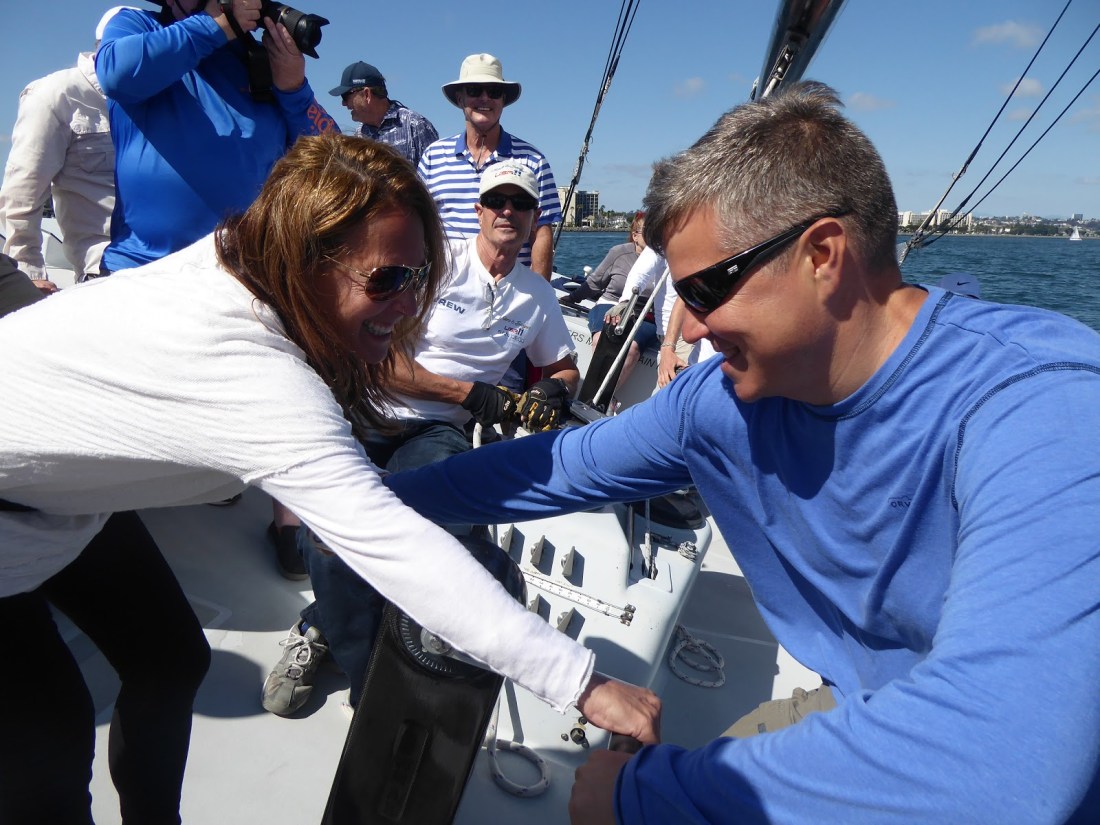 Racing with The Stars… and Stripes!

After the races, join us for dinner (not included in price) and a beach bonfire at Shelter Island. Hotel info coming soon. Limited space, so sign up soon.

Last summer, at the invitation of our new friends from the Nevada Yacht Club (NYC), Amy and I hopped aboard Stars and Stripes USA11, the 1992 America’s Cup entry, for a fantastic day of informal racing on San Diego Bay. Our hosts, both from NYC and from Sail USA11, were tremendously gracious, and we were treated to a wonderful experience.

During over a decade of chartering on San Diego Bay, we had always marveled at the majesty of this massive race boat as it went zooming past us, but we never seriously considered reserving a spot on board. When NYC offered to have AYC members join them for a trip, we decided this was our chance. The Nevada crew had reserved not only the American boat, but also Il Moro di Venezia ITA-15, the Italian entry from that vintage. With both boats crewed by experienced sailors, this excursion would not be a tourist’s luxury cruise, but instead an afternoon of racing at double-digit speeds.

The day began with a short presentation at Sail USA11’s little headquarters that covered the history of the America’s Cup and technical details of the design and manufacture of the boats we’d be sailing. We quickly moved onto the boats with a dozen NYC sailors on Il Moro and the remaining twenty or so (including us) on Stars and Stripes.

The hired crew consisted of men and women of all ages and sailing backgrounds, but each was incredibly friendly and helpful. While they handled some of the more advanced tasks like raising and lowering sails, all of us got a chance to grind the winches as much as we wanted and take the helm through a couple of maneuvers. In between all the boat handling, the crew found time to serve refreshments and take pictures at no additional cost to us.

Toward the very end of the day, we learned that the gentleman who had been coaching our group of grinders was actually Dr. Mark Niblack, a retired anesthesiologist and one of the two owners of the whole operation. From talking to Mark, it was clear that their company was never going to be a profit-making enterprise, but truly a labor of love. All of the crew were volunteers, happy to share their passion with us.

The Nevada Yacht Club made a whole weekend out of the event. After racing, we were invited to a dinner at Fiddler’s Green, a nearby restaurant completely covered in model sailboats and other memorabilia, followed by a beach-side bonfire in the evening.

We’d like to give special thanks to NYC Commodore Bobby Kawamura and Cruising Captain Mike Cox for opening their event up to AYC members and making us feel like part of their club from the start.