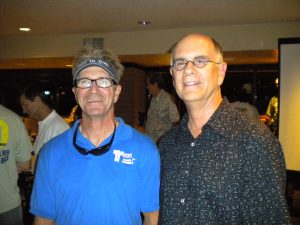 At the September Membership Meeting we had Joe “Okie” O’Conner and George Sheller give us an update on the status of the Tempe Town Lake dam repairs and future plans for City of Tempe “mixed use” facilities at the lake.

We had some new faces interested in membership.  Gilbert Kanitario who crewed for Ray Gazzera on Opening Day at Lake Pleasant signed up that night!

There were a few burgees exchanged and good fun was had by all!

TTL – Where Will the Water Come From?

This year’s Sailing Anarchy ISAF “Sportboat” Regatta was held at Coronado Yacht Club, Coronado California.  It’s a location that is not unfamiliar to AYC Sailors.  In the past, they have hosted some of the small boat fleets for the SD NOODs held in March.  Bucc and Viper sailors know it well.  The Viper fleet bailed on Opening Day events at Lake Pleasant and trucked out to the coast for this event.  The Viper overall winner was a boat with a Ullman Sails Sailmaker on board, with the runner up being Drew Harper, from Spinnaker Sailing – the West Coast Viper Distributor.  Keeping that in mind, what a great showing for the AZ Viper Fleet!  Congrats TONY!

Sailing Anarchy has a whole section on it. You can play “Where’s Stacey” on the page as well!

Here is the YouTube video sponsored by Ullman Sails 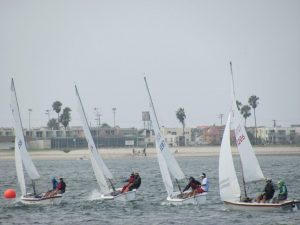 While the weekend of September 17-19 brought record temperatures to the Phoenix area, some fortunate Capri 14.2 sailors were able to spend a few wonderful days in San Diego participating in the annual Capri 14.2 Nationals hosted by the Mission Bay Yacht Club. Three teams made the road-trip and they were; Rick and Lisa Lake, Steve and Christina Campo and Sean and John Mayall. The event began on Friday with the second annual women’s Nationals. Lisa Lake recruited Morgan Henderson, a local Mission Bay sailor and skippered to a very respectable fourth place in a fleet of nine boats. Christina placed sixth and it is worth noting that it was the first time Christina had skippered the boat in a racing event. Also, Lisa was the highest placing boat with an all female team. Go girls! 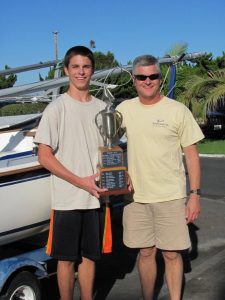 Saturday and Sunday found the boats competing in a gold fleet for experienced racers and a silver fleet for less experienced sailors. Racing conditions were fantastic as usual and both days had winds in the 10-15 knot range with minimal oscillation. There was plenty of hiking and lots of very close racing. The Arizona Yacht Club was well represented in the Silver fleet with Sean driving to first place and bringing home a Capri 14.2 Nationals perpetual trophy. Steve/Christina sailed to a second place finish and Lisa/Rick took fourth. Looks like Sean and Steve will be in the gold fleet next year.

Renew your Membership before the deadline!

Lake Pleasant 18 September starting about 11:00. Come out, tune up and have some fun! Beer and Nachos to follow at Spinnaker Point!